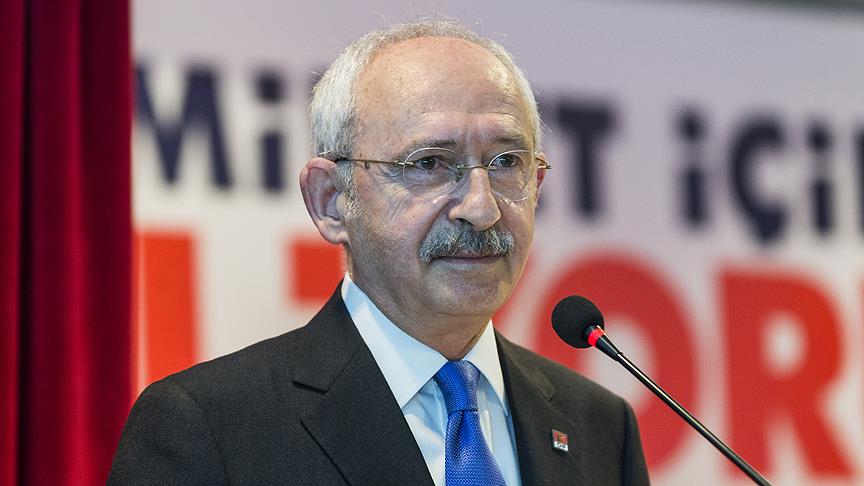 The chaos unleashed on Turkey's opposition by the June 24 elections won't be over anytime soon. Kemal Kılıçdaroğlu, the chairman of the main opposition Republican People's Party (CHP) that oversaw the formation of the Nation Alliance by "lending" 15 parliamentarians to the newly-formed Good Party (İP), has his back to the wall.

The chaos unleashed on Turkey’s opposition by the June 24 elections won’t be over anytime soon. Kemal Kılıçdaroğlu, the chairman of the main opposition Republican People’s Party (CHP) that oversaw the formation of the Nation Alliance by “lending” 15 parliamentarians to the newly-formed Good Party (İP), has his back to the wall.

Kılıçdaroğlu, who was quick to take credit for a seven-point decline in the ruling Justice and Development Party’s (AK Party) popular support, faces pressure from Muharrem İnce, his party’s presidential candidate who received over 30 percent of the votes.

An ambitious politician, İnce has no intention of forfeiting his leadership claims. Although he told reporters ahead of the June 24 elections that he would never challenge Kılıçdaroğlu, the CHP chairman’s long-time nemesis wants to force him out through public pressure. At the same time, İnce has been traveling around the country to thank his supporters but, more importantly, to mobilize support for his efforts to take over as CHP chairman. Having received “more votes than any CHP politician in 41 years,” he urges Kılıçdaroğlu, whom he blames for the party’s poor performance, to resign. He maintains that the CHP has the potential to receive more votes under the right leadership.

In contrast, Kılıçdaroğlu not only refuses to admit to failure but also enjoys the support of senior party officials. Under these circumstances, İnce’s call for an emergency party congress was not even considered by the CHP’s Central Executive Board, the party’s main decision-making body.

What started out as competing interpretations for the gap between İnce’s performance in the presidential race and the CHP’s poor showing in the parliamentary elections has evolved into a full-blown power struggle. To be clear, İnce has twice challenged the incumbent CHP leadership without success – long before his presidential bid. Empowered and emboldened by his performance on June 24, he is unwilling to stop now.

It is only natural that the CHP, which has been losing elections to the AK Party for 16 years now, may experience some post-election turmoil. Attempts to account for the gap in the party’s performance in the presidential and parliamentary elections, however, fail to take into consideration the following point: On June 24, Turkey’s opposition was defeated in an unprecedented manner. Voters behaved differently in presidential and parliamentary races, as the country transitioned into a new system of government and elections for the executive and legislative branches took place simultaneously. In this sense, the performance gap won’t just disappear in future elections. Political parties, whose leaders do not run for the presidency, are bound to experience this problem going forward.

İnce, in turn, has attached too much importance to the number of people that attended his campaign events. He fails to take into account that many voters supported him because he was the most likely opposition candidate to qualify for the second round. If Kılıçdaroğlu had shown the courage to run for president, he would have probably been more popular than his party for the same reasons. In other words, the performance gap between presidential candidates and political parties is a structural element of Turkey’s new system of government. All parties must adapt to these changing circumstances.

Unless İnce finds enough CHP delegates to force an emergency congress, he stands almost no chance against the incumbent. It is no easy task to break off from the CHP that shares a strong ideological basis and launch a successful party. There is no doubt in my mind that the CHP leadership will soon start saying that intraparty tensions play into the hands of President Recep Tayyip Erdoğan and his AK Party ahead of the March 2019 local elections.

To be clear, reviving Bülent Ecevit’s Democratic Left Party (DSP) and forming a new party won’t take İnce where he wants to go. As a matter of fact, the CHP leadership is likely to respond to any moves by İnce by launching a fierce anti-Erdoğan campaign.

At this point, the opposition faces a serious dilemma. Anti-Erdoğanism, on which the CHP relied for years, can no longer keep together the opposition alliance or prevent the brewing clash within the main opposition party. As a matter of fact, the İP and the Felicity Party (SP), which co-founded the Nation Alliance, have already announced that the alliance was dead in the water. In the aftermath of the June 24 elections, the İP wants to make sure that it is no longer stuck between the CHP and the Nationalist Movement Party (MHP). At the same time, they are worried that the radical behavior of the Peoples’ Democratic Party (HDP) in the Parliament will be blamed on the İP. Instead, the İP wants to position itself as a center-right party and win over conservative nationalists, who voted for the People’s Alliance on June 24. The SP, in turn, desperately wants to distance itself from the CHP and HDP.

Turkey’s opposition, which was united by anti-Erdoğanism, has crumbled at the first sight of five years of political stability. Sadly enough, the CHP seems incapable of analyzing or processing the new system of government and what it entails.

Is the fight against FETÖ complete?
Previous