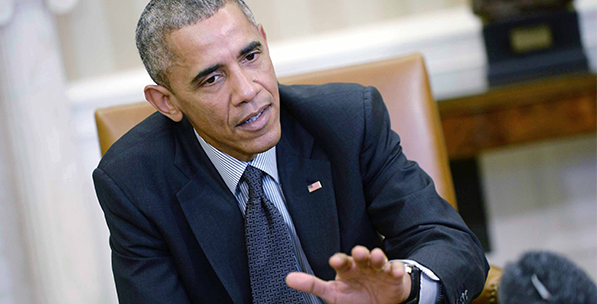 Just like President Obama, the American public also stands against another war in the Middle East.

U.S. President Barack Obama just released his second and last National Security Strategy Document on Friday. On the same day National Security Advisor Susan Rice presented the document in a speech at the Brookings Institution. Unlike the previous report, there was not much debate in Washington regarding the nature and content of the strategy document. Many already had some idea about the potential tenets of the document.

The 29-page document is less of a document on strategy regarding the future of U.S. foreign and security policy, potential challenges, ways, mechanisms and tactics to manage these problems. It mostly focuses on the things that President Obama and his administration have done over the last six years – because of that some analysts found it extremely self-congratulatory – and that U.S. administration will continue to do most of these things – the most frequently used verb in the document is “continue” – and a wish list of things for the future. Compared to the 2010 document, the new strategy report entailed emerging problems, including the Islamic State of Iraq and al-Sham (ISIS), the Ebola epidemic and more emphasis on climate change. Of course there is sharp difference between the two documents in terms of their approaches to Russia. In the 2015 document, “Russian aggression” was used seven times in addition to several different derivatives of it such as “Russian coercion.” It can be easily seen that President Obama picked fights for the next two years with Russia and ISIS. Of course one has to remember that at the U.N. General Assembly in September 2013, he mentioned the Israeli-Palestinian peace process and the Iranian nuclear deal as two of his priorities in foreign policy, meaning much can change in the next two years. In addition to those, President Obama enumerated eight strategic risks that the U.S. is facing including an attack on the U.S., threats or attacks on U.S. citizens abroad, a global economic crisis, proliferation of weapons of mass destruction, infectious diseases, climate change, energy market disruptions and the threat of failed states.

In the introduction, President Obama provides the concept of “strategic patience and persistence” as a basic requirement to handle challenges to U.S. foreign policy and security. He says that the U.S. has to “make the smart investments in the foundations of” U.S. national power. As part of his idea of “restraint” he cautions about “overreach” and argues for the recognition of “a smart national security strategy” that does not rely solely on military power. These are the concepts and arguments that President Obama utilized in the foreign policy part of his State of the Union address on which he spent less than one-fifth of the entire address to nation. In the State of Union, Obama mentioned smart power and the necessity to use diplomatic means to resolve problems in the world.

It may be because of the Iraq war syndrome and the problems that arise after the invasion that, for the last six years, the administration has been constantly fighting with the ghosts of this war while trying to conduct foreign policy. Every criticism somehow sounds like someone is trying to push the U.S. to the edge of long and costly warfare again. These arguments have been most frequently used in regard to the criticism of his handling of the Syrian crisis. However, President Obama needs to understand that he does not need to constantly reiterate “restraint” while responding to policy recommendations in terms of Syria or Iraq.

Just like President Obama, the American public also stands against another war in the Middle East. Not even the most hawkish Republicans are suggesting a total war against Syria. Just like President Obama many in Washington are against sending ground groups to invade another country. Just like him, many people are asking about what happens “the day after” and may have some responses if they are asked. Neither Americans nor people in the Middle East want another Iraq war. The majority of people in Washington are in favor of

Never Let a Good Crisis Go to Waste
Previous
After 'Chapel Hill Shooting': Double Standards in the Media Discourse
Next
Loading...
Loading...
We use cookies to ensure that we give you the best experience on our website. If you continue to use this site we will assume that you are happy with it.Ok