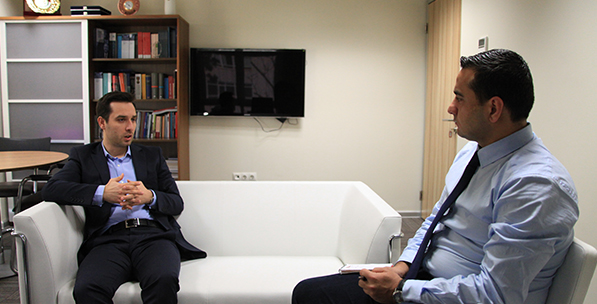 “Not Realistic to Expect a Quick end for ISIS”

Relocating the Ottoman tomb in Syria was necessary to diminish risks of dragging Turkey into a conflict in the war-torn region and it is not realistic to expect total clearence of ISIS anytime soon, says regional expert Ulutaş.

Asignificant change in Turkey-Israel relations after the Israeli elections should not be expected.

The instability caused by the Syrian civil war has brought the world face to face with the Islamic State of Iraq and al-Sham (ISIS). While there are reports regarding the retreat of ISIS from Iraq and Syria, the terrorist organization still maintains its power. Middle East is witnessing many developments – the change of administration in Saudi Arabia, events taking place in Yemen and Israeli elections around the corner. Daily Sabah spoke with Ufuk Ulutaş, foreign policy coordinator at the Foundation for Political, Economic and Social Research (SETA), which is one of the leading think tanks in Turkey, about the latest developments in the Middle East.

Ufuk Ulutaş: Actually, this operation was executed to diminish the risk of conflict. Turkey felt that the risk of being dragged into an open and armed conflict in which it could not set the conditions was increasing especially due to estimated clashes between ISIS and the People’s Protection Units (YPG) around the tomb. Therefore, Turkey tackled this risk with a proactive move. Turkey also assessed the possibility of the Syrian regime or affiliated groups’ provocations and therefore moved the tomb and its soldiers to safety.

With the Operation Shah Euphrates, this risk of conflict was diminished. If this operation was done through an armed clash between Turkish troops and ISIS, it would have the risk to escalate. Since not a single bullet was fired, it would be safe to argue that the operation itself would not cause new conflicts.

DS: In the last few days, we observed ISIS’s retreat from both Syria and Iraq. Do you think that ISIS is on its way to dissolution?

UU: Strategically speaking, Kobani was one of ISIS’s greatest mistakes. It was an insignificant spot for ISIS and others except the YPG. Even the U.S. administration admitted this insignificance. However, ISIS insisted on capturing this spot and it turned out to be a grave mistake. It brought together an international coalition who were otherwise passive observers to the Syrian conflict. The ensuing airstrikes partially worked and damaged ISIS both physically and psychologically. Losing Kobani after spending so much energy on it created disappointment among ISIS’s ranks, and some within ISIS criticized the leadership for wasting men, power and prestige.

However, I still don’t think that ISIS is going to dissolve easily under these conditions. The conditions that created a monstrous organization like ISIS still remain in both Iraq and Syria. Iraq has taken some political steps to negate former Prime Minister Nuri al-Maliki’s sectarian policies. However, the fragility of state institutions and ethnic and sectarian mistrust among Iraqis still remains. ISIS has been exploiting this mistrust to its benefit and for recruitment purposes. As for Syria, President Bashar Assad’s massacres are continuing in full force and state authority is non-existent in a big swath of land. ISIS-type actors are nourished in chaos and benefit from lack of state authority. It is not a coincidence that two of ISIS’s bastions, Syria and Iraq, are characterized by weak state authority. Without putting these two countries in order and addressing people’s demands, it would be quite premature to argue that ISIS is on its way to dissolution. We should not forget one point, and that is that ISIS is not the cause of chaos in the region, rather it is a symptom of it. Hence treatment must address the cause.

DS: What should be done to remove the ISIS threat?

UU: For this to happen, several steps must be taken simultaneously. Firstly, the causes that paved the way for the creation of ISIS should be eliminated. In Iraq, ISIS has sociological roots and tribal links, but in Syria it does not. In Iraq, Sunnis must be brought into the political picture and assured that the

The PKK is not an Independent Non-state Actor
Next
Loading...
Loading...
We use cookies to ensure that we give you the best experience on our website. If you continue to use this site we will assume that you are happy with it.Ok