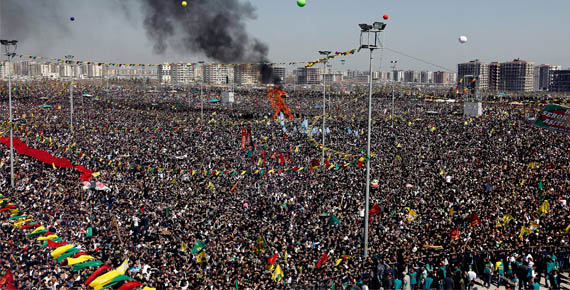 Newroz and the New Paradigm

Given the projected direction and strategic vision of the message and notions used in the statement, this message represents a mental transformation and a paradigm change.

Held on March 22, Newroz celebrated by hundreds of thousands of people in Diyarbakır surmounted a significant and critical threshold in the resolution process. The statement of the outlawed Kurdistan Workers’ Party (PKK) leader Abdullah Öcalan, which was read on the day of Newroz, indicated the paradigm on which the resolution process is based and eased the minds of those who express more concern than hope.

Öcalan’s remarks “Witnessed by the millions of people who heed my call, I say a new era is beginning; an era where politics gain prominence over weapons. We have now arrived at the stage of withdrawing our armed forces outside the borders. I believe that all those who have believed in this cause and me are sensitive to the possible dangers of the process. ,” have proven without a doubt that a new era has just begun. Öcalan’s giving his message after an exchange of opinion with leading actors of the Kurdish movement (Kandil, Europe and the Peace and Democracy Party (BDP) and the message’s being read in crowds will render the message more effective and make people have more trust in the process.

Given the projected direction and strategic vision of the message and notions used in the statement, this message represents a mental transformation and a paradigm change. The content of this declaration turns the negative energy generated by the claims that Kurdish people dream of an idiosyncratic world into positive energy by channeling it in Turkey. It is, of course, significant that Öcalan has given messages of ceasefire and withdrawal beyond the border. But what matters more is that in his declaration Öcalan proposed that politics should replace armed resistance and emphasized coexistence.

This is a crucial political position which will make a great deal of contributions to the resolution of the Kurdish issue and the democratization of Turkey. This position is a change of paradigm that will democratize Turkey as it strengthens the will of coexistence. Both the future of the process and the new set of concepts, which Öcalan proposed to the Kurdish movement and announced to the Turkish public opinion, depend on this paradigm change. That Öcalan and thus the Kurdish movement began to correctly interpret Turkey and the region in line with the new political perspectives of the ruling Justice and Development Party (AK Party) will probably lead to strategic changes in domestic political balances and to Turkey’s regional intentions.

Öcalan’s new set of concepts statement asks the Kurdish movement to look to the future setting aside the pains of the past and to disarm and employ political instruments. It recommended the movement to act in good faith, ease the pain and give up revenge. It also argues that one should not search for belongingness in archaic civilizations and beliefs but in the brotherhood of Islam. The new set of concepts has given hints about the paradigm change. The future and the rhythm of the process depend on the ability of the Kurdish movement to adapt this paradigm change.

There is no need for fear and concern

The New Message' and the Solution Process
Previous