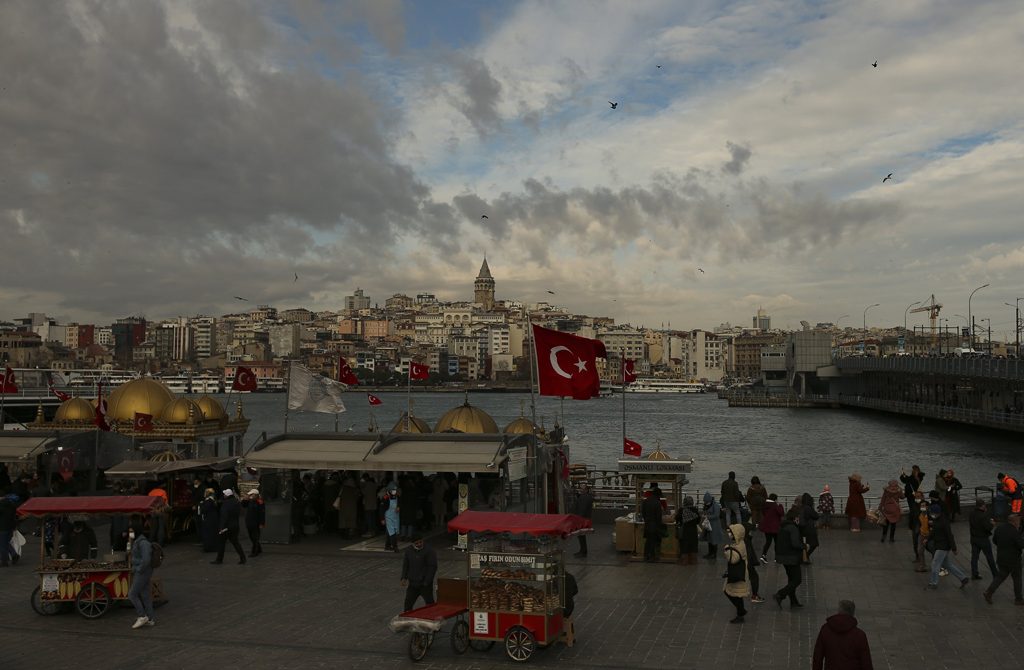 New dynamics in Turkish politics and debate on presidentialism

Leaders of Turkey’s major political parties are meeting more frequently, as President Recep Tayyip Erdoğan's "alliance" talks with the Felicity Party (SP) reinvigorated the opposition. There is an effort underway to keep relations warm between the main opposition Republican People’s Party (CHP), the Good Party (IP), the SP, the Democracy and Progress Party (DEVA) and the Future Party (GP) over proposals of an “augmented parliamentary system.”

Leaders of Turkey’s major political parties are meeting more frequently, as President Recep Tayyip Erdoğan’s “alliance” talks with the Felicity Party (SP) reinvigorated the opposition. There is an effort underway to keep relations warm between the main opposition Republican People’s Party (CHP), the Good Party (IP), the SP, the Democracy and Progress Party (DEVA) and the Future Party (GP) over proposals of an “augmented parliamentary system.”

Over the next months, four topics, interacting with one another, will fuel tensions in Turkish politics: the fate of the Peoples’ Democratic Party (HDP), the emergence of new political movements, efforts to change the balance of power between electoral alliances and the debate over Turkey’s political system.

Most recently, footage taken at the HDP’s local office in Esenyurt, Istanbul – full of terror propaganda – established yet again that the party won’t be able to distance itself from the terrorist organization PKK.

It remains unclear whether the Nationalist Movement Party’s (MHP) call for the HDP’s closure will give way to an actual trial – and whether the Constitutional Court would green-light the closure of a political party.

Due to the elevated legal threshold for closure, it is possible that a closure case against that party won’t end it. For the record, the HDP leadership appears to encourage, rather than seek to prevent, their party’s closure.

Yet the movement’s legitimization, in its current state, would clearly not contribute to Turkish democracy. As such, the HDP will continue to fuel a war of words between rival alliances and politicians and inform their steps.

A potential decision by the SP, which is rooted in the “National Vision” (Milli Görüş) tradition, to join the ruling Justice and Development Party’s (AK Party) People’s Alliance won’t have a huge impact on numbers, but it would make it harder for DEVA and the GP to align themselves with the CHP.

Indeed, it seems that the SP is divided over joining the People’s Alliance. Yet their shared ideology and relatively mild disagreement over presidentialism push the AK Party and the SP closer together.

Furthermore, the SP leadership entered into talks with the AK Party twice, inconclusively – which did not earn them any points. In other words, being part of the opposition Nation Alliance, alongside the CHP, didn’t attract new voters to the SP.

By contrast, the SP could lure away certain AK Party voters (just like the MHP did) upon joining the People’s Alliance. That would also curb the influence of DEVA and the GP over the ruling party’s base.

Such calculations will keep the SP in the spotlight for some time. Recent statements by that party’s senior officials suggest that they find it difficult to decide whether to stay where they are in the political spectrum.

The policy changes that they expect from the government may be subject to negotiation within the broader framework of Erdoğan’s reform agenda.

The opposition is currently looking for a “social glue” to stay together. All opposition parties, except the HDP, already have their own proposals for Turkey’s potential return to parliamentarism. They will soon unveil their plans to the public.

The IP appears to want a nonpartisan yet powerful president, whereas the CHP and the GP assign a “symbolic” role to the presidency.

Will those disagreements over an “augmented parliamentary system” serve to bring opposition parties together? As the debate continues, we will come to appreciate that the conversation is reactionary in many ways: The opposition parties are opposed to the current role of the president as a powerful player affiliated with a political party.

However, they do not want the nonpartisan, unaccountable and powerful presidency that the 1982 Constitution created. To address the instability of Turkey’s pre-1982 parliamentary system, they call for certain “rationalization” practices.

It will be extremely difficult for opposition parties to agree on a concrete proposal capable of addressing those multiple issues. At the same time, they will have to convince the Turkish people, who elected their presidents directly in 2014 and 2018 under the 2007 amendment, to give up that power.

Moreover, the opposition has to contest the 2023 election under the current rules, win enough votes to amend the Constitution and get a presidential candidate who is compatible with that plan to win the race.

If the opposition were to engage in a genuine debate over Turkey’s system of government, they would have offered to revise the current system in their own way.

Instead, they pay lip service to “restoring the parliamentary system” with “augmented” proposals in an attempt to bring together otherwise incompatible political movements – just one more ingredient that goes into their recipe of anti-Erdoğanism. It is a forced attempt to forge a “pro-democracy bloc” against the backdrop of fresh changes around us.

Here’s the bottom line: The debate over presidentialism will serve the interests of the ruling party.

US, EU must play effective role in Turkish-Greek ties
Next
Loading...
Loading...
We use cookies to ensure that we give you the best experience on our website. If you continue to use this site we will assume that you are happy with it.Ok