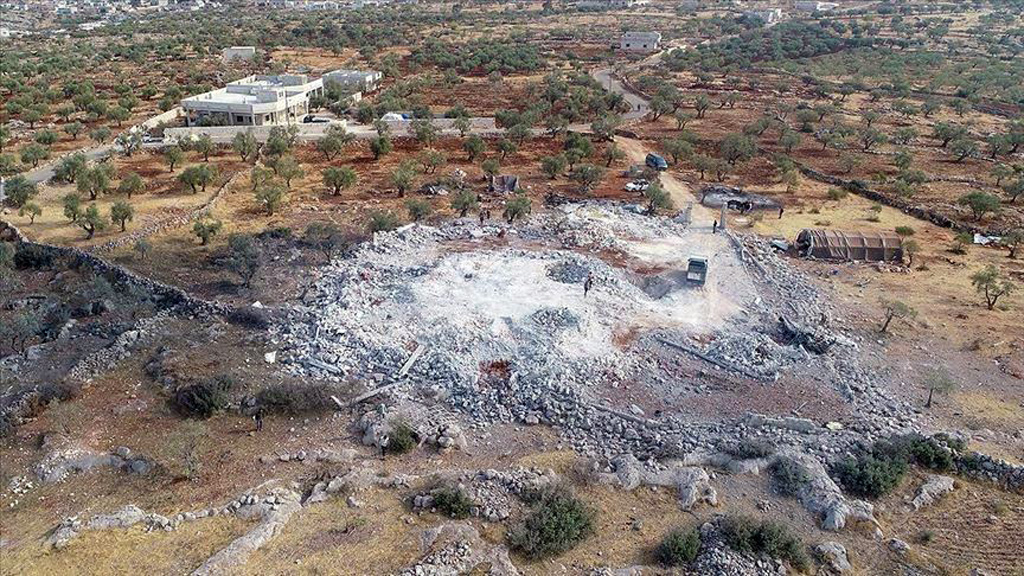 Footage captured by an Anadolu Agency drone in northern Syria depicts the location where Abu Bakr al-Baghdadi, the head of terrorist group Daesh, or ISIS, was killed by the U.S. forces.

The United States has declared that it killed Abu Bakr al-Baghdadi, the leader of Daesh, after a successful military operation on Oct. 27. The death of Baghdadi will be a new turning point for the struggle against international terrorism and for Middle Eastern politics. The de-territorialization of Daesh was also a turning point, because with de-territorialization, Daesh had lost its claim on a caliphate and statehood. Therefore, in the near future, it has to restructure itself according to the new realities.

The United States has declared that it killed Abu Bakr al-Baghdadi, the leader of Daesh, after a successful military operation on Oct. 27. The death of Baghdadi will be a new turning point for the struggle against international terrorism and for Middle Eastern politics. The de-territorialization of Daesh was also a turning point, because with de-territorialization, Daesh had lost its claim on a caliphate and statehood. Therefore, in the near future, it has to restructure itself according to the new realities.

From the beginning Daesh has been known as a multifunctional tool as well as a threat for regional and global actors. For sure, it was and is a threat to regional powers such as Syria, Iraq and Turkey. It had controlled a large part of the two Arab countries, namely Iraq and Syria, for several years and has destroyed the entire social and political balances in these states. It led the Shiization of Iraq, after the vicious actions in the country against the Shia population, Kurds and especially the unprotected Yazidis. As a reaction to the Daesh brutalities, hundreds of Hashdi Sha’bi organizations were established and attacked the Sunni Arabs living in Iraq. In the end, they eradicated Sunni Arabs from the political landscape and politically Shiized the country.

Likewise, Daesh attacked Turkish cities many times and killed several hundred innocent civilians. There are still many members of the organization in the country who continue to pose a threat to Turkey. At the very least, its militants have been infiltrating the Turkish territories. Turkey had to launch a military operation, Operation Euphrates Shield, in 2016 against Daesh in the northern part of Syria in order to clean its border from the Daesh threat.

Furthermore, Turkey had to build a wall along its border with Syria to prevent the infiltration of terrorists. That is to say, Turkey has paid heavy human, political and economic prices in its struggle against Daesh.

On the other hand, Daesh has been instrumentalized by global states who have been involved in the Syrian crisis. Daesh has played a multifunctional role for the domestic and foreign policies of global powers as well as for the Middle Eastern politics.

For instance, the U.S. adduced Daesh for its military intervention into the Syrian crisis and for its support to the so-called Syrian Democratic Forces (SDF), made up primarily of PKK-affiliated People’s Protection Units (YPG) terrorists.

Compared with the regional countries and even with the European states, the U.S. is too distant to be a direct target for Daesh attacks. In spite of Daesh’s harsh anti-American rhetoric, the U.S. is the least affected country. In addition, the U.S. administrations have been using the Daesh threat as a ploy for domestic consumption and politics as well.

Similarly, the Russian Federation has not been targeted so far, but Daesh still constituted the main reason for the Russian military intervention in 2015, at a time when the Assad regime was about to collapse. Russia has instrumentalized Daesh and hit it several times; however, it mostly targeted the mainstream Syrian opposition groups and de-territorialized these groups in favor of the Assad regime.

European countries led by France, Germany and the United Kingdom do not want to be on the ground in the Syrian crisis, but they want to be safe from the negative repercussions of the crisis. European countries cannot challenge the influence of either the U.S. or Russia and they remain aloof from the developments on the ground. However, they expect the U.S. and regional countries such as Turkey to struggle against Daesh and save the Europeans from the Daesh threat.

Ultimately, Daesh predominantly fought with the Syrian opposition groups who were fighting against the Assad regime, and gained most of its territory, almost 85%, from these groups.

Later, Daesh abandoned almost all of its territory to the YPG/SDF with the support of the international anti-Daesh coalition led by the U.S. That is, the territory under the control of the Syrian opposition was indirectly given to the U.S.-backed YPG/SDF.

In conclusion, although it has been posing a threat to most regional and global actors, Daesh, like a Swiss army knife, has also been directly or indirectly serving the interests of global powers. They have been exploiting the Daesh threat to empower some regional actors against others.

What the Turkish public thinks about developments in Syria
Previous