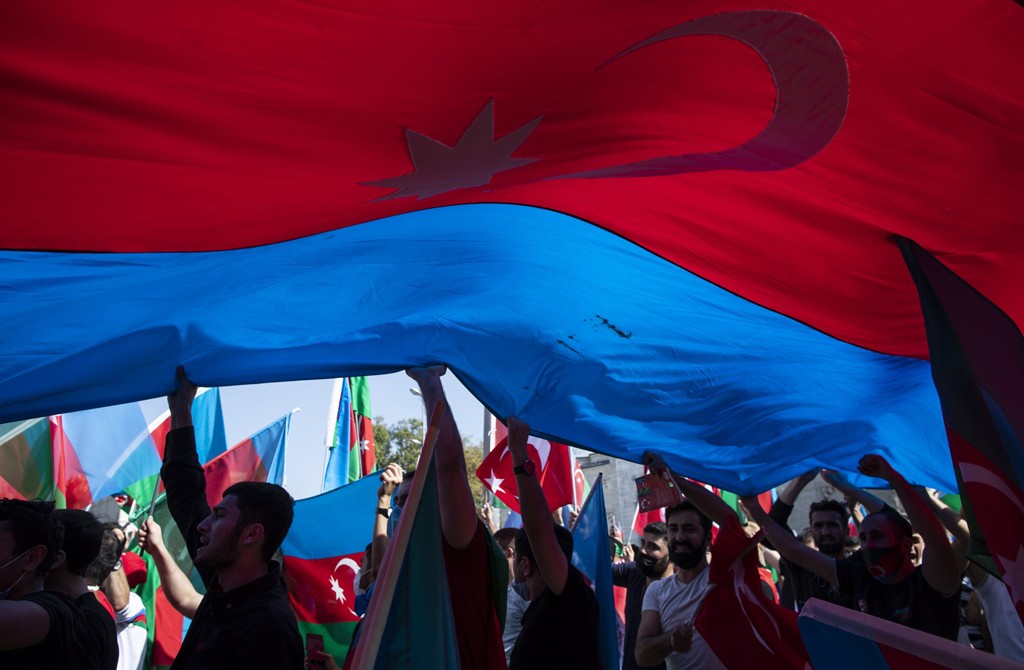 Neither war nor peace in Nagorno-Karabakh

The ongoing conflict between Armenia and Azerbaijan – which began with the former's recent aggression – has escalated rapidly since Azerbaijan retaliated in kind. Baku has indeed turned Yerevan's miscalculation into an opportunity to regain lost territories. So far, Azerbaijan has made some remarkable military gains to liberate some of its territories from the Armenian occupation.

The ongoing conflict between Armenia and Azerbaijan – which began with the former’s recent aggression – has escalated rapidly since Azerbaijan retaliated in kind. Baku has indeed turned Yerevan’s miscalculation into an opportunity to regain lost territories. So far, Azerbaijan has made some remarkable military gains to liberate some of its territories from the Armenian occupation.

While the Azerbaijani side has focused on regaining Nagorno-Karabakh and the surrounding regions amid the recent military escalation, the Armenian side is trying to further expand the crises by bringing in external support.

So far, Armenia’s expectations of military aid have not materialized on the part of Moscow. It seems that so long as the Azerbaijani military focuses solely on its occupied territories, Russia will not militarily intervene.

That does not mean that Moscow will stay neutral in the current crisis. Despite Moscow’s mistrust of the Nikol Pashinian government in Armenia, Russia is still much closer to Yerevan than Baku.

Almost all segments of Turkey’s political community, as well as the county as a whole, have strong support for Azerbaijan. Ankara is much closer to Baku than any time before, which is an advantage for Azerbaijan.

Still, it would be misleading to put the responsibility for the recent escalation on President Recep Tayyip Erdoğan. It is becoming fashionable nonsense in international media and certain Western countries to explain away almost every conflict with some reference to Erdoğan.

The current escalation is the consequence of a frozen conflict, maintained for decades by the inaction of international actors and unfair treatment of Azerbaijan. The Armenian side has never felt the urgency to come up with some political solution.

The unbearable lightness of accusing Turkey of everything going on in the region is the newfound comfort formula of political analysts. This formula covers up the deeply rooted sources and complicated dynamics of the Nagorno-Karabakh conflict, just as it does with those elsewhere.

Azerbaijan is trying to regain territories illegally occupied by Armenia. Yerevan can only maintain its illegal occupation with the support of the Minsk Group – headed by Russia, France, and the U.S. Without the political and military permission of the Minsk trio and strong weight of the Armenian diaspora, Armenia could not continue its occupation.

The main reason behind the recent aggression is a loss of faith in diplomacy and the weakness of political initiatives. The Armenian diaspora has supported and sponsored the Armenian side and advised citizens to stand tough on Ankara and Baku, promising to maintain their resistance against both.

Armenian citizens gained nothing from such policies – they just got poorer and became more dependent on the Armenian diaspora and other international actors. They are also isolated from their neighbors.

For more than two decades, Baku has been carefully preparing to regain territories it has lost since the early 1990s. Nagorno-Karabakh and the regions surrounding Karabakh are a strategic asset for both sides, but it has been a matter of national honor and pride.

For experts who follow the region and the Nagorno-Karabakh conflict, it is evident that it would be tough to maintain the status quo, considering both sides’ nationalistic discourses.

The Organization of Security and Co-operation for Europe (OSCE) founded the Minsk Group in 1992 to encourage the peaceful settlement of the conflict. The co-chairs of the Minsk Group – Russia, France, and the U.S. – have helped maintain the status quo for more than 25 years.

So far, the maintenance of the status quo has only served the interests of the Armenian side, which occupied nearly 20% of Azerbaijan’s territories since the early 1990s. Russian military aid as well as the U.S. and French political support have been critical for maintaining the status quo.

Armenia has thus not taken political initiatives seriously because of their advantageous diplomatic position. Yerevan has twisted its relations between Moscow and Washington and other European capitals and for a long time, this helped it maintain frozen conflicts in its favor.

There has not been much pressure or any severe sanctions on the Armenian side, despite having violated international law and U.N. Security Council (UNSC) Resolutions. The Minsk Group’s existence has so far protected the Armenian side from both sanctions and Azerbaijani political and military initiatives.

New hope emerged after the Velvet Revolution that brought Nikol Pashinian to power in Armenia in 2018. Pashinian toppled the politicians of the powerful Karabakh elite in Yerevan, yet he never had a chance to deliver on expectations regarding how he would transform the country’s rotten political system.

Pashinian has also failed to stabilize the Armenian economy. Rather than engaging in weighty diplomatic initiatives to find common ground with Azerbaijan, he has opted to escalate military tension further with Baku.

The Azerbaijani public and political authorities have lost all hope in the diplomatic settlement of the issue. In the meantime, influential Armenian diaspora groups and lobbies have played a significant role in putting pressure on Minsk Group members to maintain the status quo.

However, over the last three decades, the balance of power has changed in favor of Azerbaijan. With its oil and natural gas resources and coordinated efforts to strengthen its armed forces and economy, Azerbaijan has made remarkable improvements with strategic patience.

Military coordination and economic ties with Turkey have boosted Azerbaijan’s strategic assets and confidence. In addition to Turkey, Azerbaijan has also improved its strategic relations with Israel and invested in links with Moscow. All these efforts have paid off.

On the other hand, Armenian elites have done little but manipulate nationalist sentiments at home.

The recent military escalation has challenged the status quo and changed the nature of this frozen conflict. Azerbaijan will not accept non-movement any longer. Azerbaijani people will request more from their political leaders to “liberate” Nagorno-Karabakh.

The Armenian side, meanwhile, will have to become either more dependent on Moscow or find a sustainable solution to the Nagorno-Karabakh conflict. A diplomatic solution to the current crisis is still possible with the involvement of a neutral mediator.

However, this new reality should be based on a new diplomatic process if the primary parties want to resolve the problem diplomatically. It is no longer possible for the Minsk Group to maintain the “neither war nor peace” situation. They have to include new actors like Turkey and try to be fairer if they still want to be relevant in solving the crisis.

There is no solution without Turkey
Previous

EU summit and Macron's brand new nonsense
Next
Loading...
Loading...
We use cookies to ensure that we give you the best experience on our website. If you continue to use this site we will assume that you are happy with it.Ok