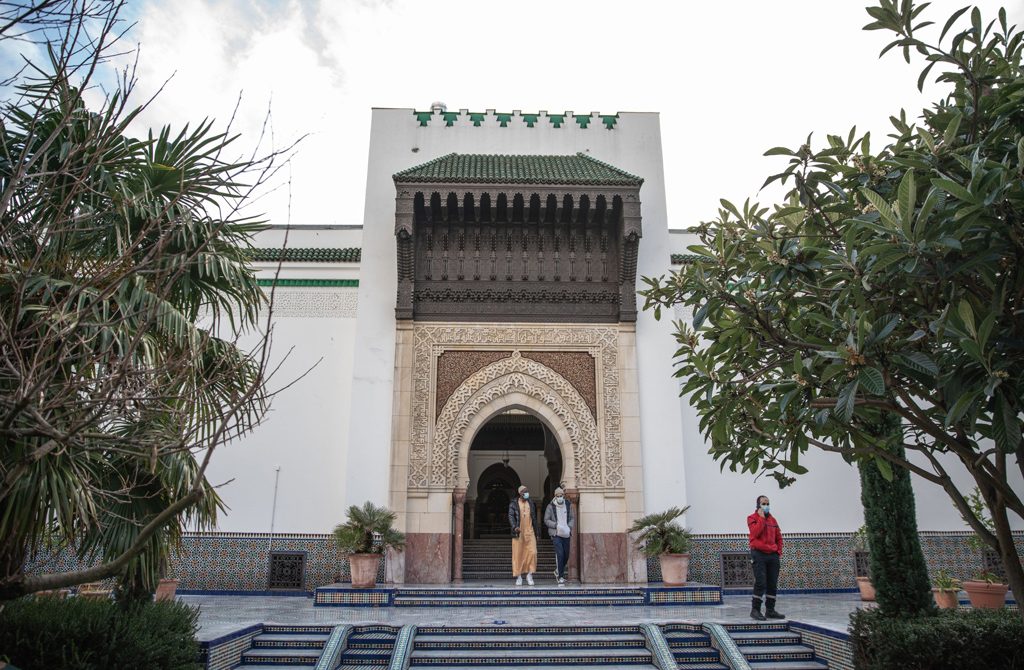 A general view of the entrance to the Grand Mosque of Paris, the capital Paris, France, Dec. 11, 2020. (Photo by Getty Images)

Based on the facts discussed so far, it is obvious that Macron, who was defeated against the central parties in the regional elections held in June, will be more Islamophobic in order to maintain his popularity in society and to gain votes from his opponents.

In France, the country of “freedom, equality and fraternity,” the policy pursued in recent years to restrict the freedoms of Muslims has now reached the point where it pushes the limits of tolerance. Mosques closed one after the other for irrational reasons, decisions that interfere with the religious freedom of Muslims and steps to exclude Muslims from the public sphere have now become the norms of daily life in the country.

On the way to normalizing Islamophobia, which has become an ordinary part of daily politics throughout France, there are concrete examples that violate the rights of Muslims in the country and restrict their freedom. First, a whistleblowing hotline was set up by the Ministry of Interior last year to combat so-called “Islamic radicalization” and French citizens were asked to report people involved in such activities. Thus, all Muslims in the country were portrayed as potential criminals.

Second, the Collective Against Islamophobia in France, one of the largest nongovernmental organizations (NGOs) of the Muslim community in the country, was closed last year by the decision of the Council of Ministers. Third, with the so-called “Law on Principles Reinforcing Respect for the Principles of the Republic,” which was approved by parliament this year, the legal ground was prepared to allow interference in the daily life and private life of Muslims in the country. Last but not least Interior Minister Gerald Darmanin admitted last month that 92 of the 2,500 mosques in the country have been closed since September 2020.

In addition to the concrete decisions taken to intimidate and marginalize Muslims in France, two more important issues that came to the fore during President Emmanuel Macron’s term should be mentioned. The first of these is the social engineering project, which is called “French Islam” and reflects the understanding of secularism from the top down. This project, voiced by Macron himself, aims to wear down the sui generis values of Islam and assimilate Muslims under the name of so-called social cohesion. Macron’s recent baseless statements such as “Islam needs to be restructured” and “Islam is in crisis” can also be seen as extensions of this social engineering project.

There are multiple reasons behind the frequent decisions made by the Macron administration against Muslims in recent years. Chief among these is the president’s desire to revive his falling popularity. It is a well-known fact that Macron, who took office by drawing a middle passenger profile during the election process in 2017, has lost support in society amid the current situation. The fact that his Republic March Movement (LREM) party suffered a great defeat in the regional elections held in June of this year confirms this. In these elections, which are seen as a kind of rehearsal for the presidential elections to be held next year, LREM received only 7% of the votes in the second round and remained below the 10% threshold.

The fact that LREM lost big cities such as Lyon, Marseille and Paris to rival parties in last year’s local elections shows that the end has already begun for the president. Therefore, we can say that Macron, who is planning to be a candidate again next year, is stuck in a corner in domestic politics. Seeing that things are not going well in terms of his own political future, he has embraced “anti-Islamism,” which has now become the “spirit of the age” in European politics, in order to reverse this situation.

It should be also noted that the extreme right figures and the national press play a facilitating role in the decisions taken against Muslims in France, as well as the leading role of the Macron administration. The Islamophobic rhetoric constantly voiced by the right-wing extremists like Marine Le Pen or Eric Zemmour, and the news of the French press fueling Islamophobia have a functional role in presenting the existence of Muslims in the country as a threat.

As a matter of fact, Islamophobia has exploded in France due to the attitude of Islamophobic actors that present the Muslim presence in the country as a threat. According to the report published by the National Advisory Commission for Human Rights, anti-Semitic actions in France decreased by 51% last year, while anti-Islamic actions increased by 52%. In other words, anti-Semitism has been replaced by Islamophobia in France. This striking figure, revealed by the official authorities, indicates that the existence of Islam and the security of Muslims in France are clearly under threat.

Based on the facts discussed so far, it is obvious that Macron, who was defeated against the central parties in the regional elections held in June, will be more Islamophobic in order to maintain his popularity in society and to gain votes from his opponents. In line with this aim, it will continue to present the existence of Muslims in the country as a threat to the security of the state and society. As an outcome of this process, it seems that new decisions might be made that restrict the freedoms of Muslims in the upcoming period.

Libya is not ready for elections
Next
Loading...
Loading...
We use cookies to ensure that we give you the best experience on our website. If you continue to use this site we will assume that you are happy with it.Ok