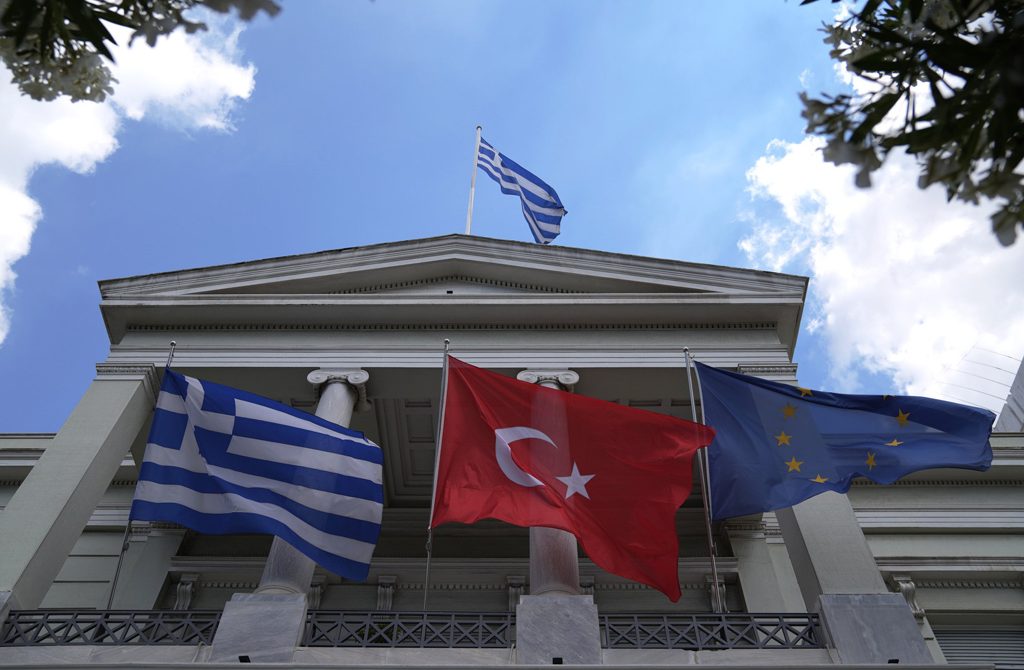 From left to right, the flags of Greece, Turkey and the European Union wave on the foreign ministry house before a meeting of Turkish and Greek foreign ministers in Athens, Greece, May 31, 2021. (AP Photo)

Ankara should also continue its call for Athens to return to constructive neighborly relations and pave the path toward that direction.

Greek Prime Minister Kyriakos Mitsotakis once proudly mentioned to the press that “Greece has successfully turned the Turkey-Greece conflict in the Eastern Mediterranean into a Turkey-EU conflict.” In the last several months, the Greek side has expanded its strategy and attempted to use the ongoing tension in the Eastern Mediterranean as a tool to isolate and contain Turkey in the region. Mitsotakis’ team is now effortlessly attempting to benefit from the disagreements between Turkey and the United States, Turkey and France, and Turkey and the other actors in the region. The Greek side is attempting to transform her security concerns into an intra-NATO issue by signing security alliances with other member countries against Turkey. Paris was enthusiastic about being a part of the anti-Turkey alliance; however, Athens’s efforts to bring Washington onto its side did not satisfy the unrealistic ambitions of the Greek prime minister.

Greek politicians’ obsessive anti-Turkey stance has led to criticism and intimidation among NATO allies and European Union member countries. If the Greek side continues to overplay their hand, this daunting policy will gradually produce reactionary responses. The Turkish side made numerous warnings before deciding to change the emerging isolation effort through the limited use of military tools in the summer of 2020. Now the two countries are purposefully dragged into an unnecessary arms race, making none of the parties feel more secure. The resources of both nations will be wasted for an extreme arms race, which can easily be constrained under the NATO mechanism.

Athens’ efforts to isolate and contain Turkey by mobilizing larger alliances might be considered smart moves by politicians in Greece. Still, even Athens’ best friends know that they are overplaying their hands in this game of escalation. On the other hand, Ankara invited Athens to resolve all outstanding problems in the region through international law, good neighborly relations, dialogue and negotiation. The Greek side believes that they are the weak side, and they do not want to sit and sort out the problems with Turkey through bilateral talks. For Athens, the asymmetric gap is expanding against their side, and they will only sit with Turkey after reassuring a broader alliance against Turkey. While Turkey tried to address the problems with its neighbor bilaterally, the Greek side struggled to include more actors and wanted to make the equation even more complicated. Such an alliance is dysfunctional and unrealistic, and will generate a different response from the Turkish side.

The tension between Turkey and the U.S., Turkey and the EU, and Turkey and other Eastern Mediterranean countries is a fact. However, there has been a gradual decline in this tension over the last several months. Turkey is relatively more comfortable engaging with its regional counterparts via diplomatic means. These contacts did not yet allow for overcoming all the critical problems, but the obstacles to a more robust diplomatic path are gradually clearing up.

Turkey continues to offer many economic opportunities and partnerships in the areas of defense and security. The Greek and Greek Cypriot efforts to situate Turkey as a hostile actor will undermine European security and generate gaps in NATO’s defense capacity. It would be advisable for the relevant authorities in the EU and NATO to stop their anti-Turkey ambitions and contribute to sincere confidence-building efforts with Turkey.

The EU is responsible for many of the aggressive moves that are committed by the Greek side. Rather than hiding behind Greece or other member countries, they should choose a more sincere and realistic political engagement to reassure trust between the parties. The EU is currently spending some time off and is stalling reengagement with Turkey, but they may not face better conditions in the future if they do not act more sincerely now. The EU and NATO should act more responsibly and moderately and be part of the solution rather than the problem.

Incorporating Turkey in a more constructive and accommodating way will strengthen NATO defense capacity and make the EU feel much more secure in this new era of marked uncertainty and weakened trans-Atlantic security cooperation. Responsible authorities in NATO and the EU need to urge Greece and its motivators to act more constructively and choose the path of good neighborly relations with Turkey. Mounting Greek fears with more significant threats will serve no one’s interests, other than those who aim to generate rifts and weaknesses in NATO and Europe’s safety and strategic interests. A period of gradual, reciprocated and sincere tension reduction steps from all the concerned parties will help boost the interests of all sides. Ankara should also continue its call for Athens to return to constructive neighborly relations and pave the path toward that direction.

'Arresting’ the West’s relations with Africa
Next
Loading...
Loading...
We use cookies to ensure that we give you the best experience on our website. If you continue to use this site we will assume that you are happy with it.Ok