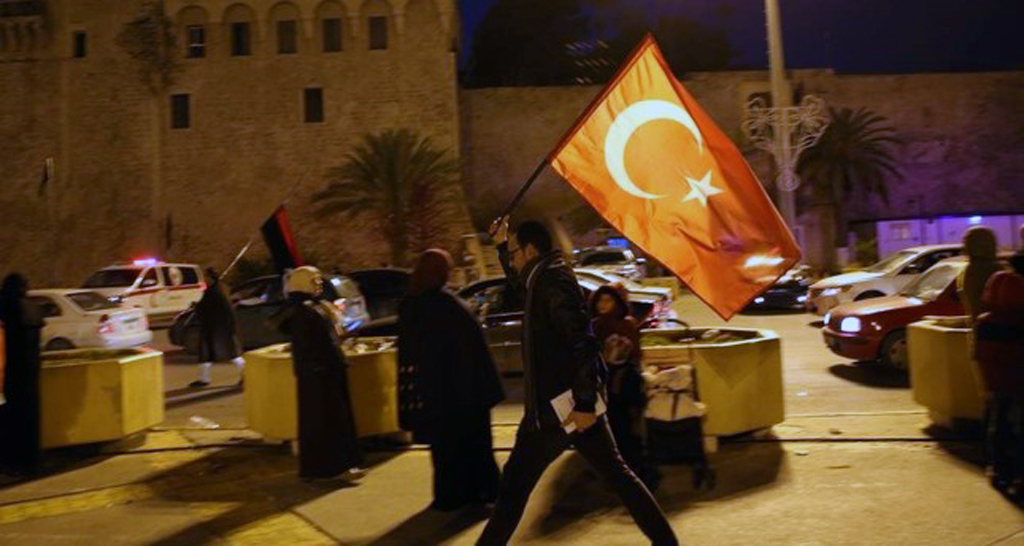 Following Turkey's decision to throw its weight on regional developments and be a more influential actor in the Mediterranean, countries trying to exclude Ankara and its rights, have been uneasy

Countries opposing Turkey’s growing influence in the Mediterranean have joined forces to obstruct its activities and goals in the region, as the country is seeking to protect its regional rights and interests following cooperation with Libya’s U.N.-recognized government on security and maritime borders.

Egypt announced Monday that it will hold a meeting with four European Mediterranean countries about developments in neighboring Libya, following the Turkish Parliament’s decision to deploy troops in the country. According to the Egyptian Foreign Ministry, Egypt, France, Italy, Greece and Southern Cyprus will meet today in the capital Cairo.

Following Turkey’s decision to deploy troops, some countries, including the UAE and Saudi Arabia, have tried to defame Turkey by starting propaganda on social media. Egypt has also talked with U.N. Secretary-General Antonio Guterres to defend its view that Turkey’s deployment of troops threatens the country’s stability. Turkey’s aim in taking these moves is to provide regional stability, benefitting the interests of both Tripoli and Ankara. Egypt has also slammed maritime and military deals signed between Ankara and Tripoli in November as “illegitimate.”

Libya’s GNA recently made a formal request for “air, ground and sea” support from the Turkish military to help fend off an offensive from the forces of Gen. Khalifa Haftar, who is attempting to take control of the capital, Tripoli. Turkey supports the U.N.-backed government against the militia and mercenaries of the latter self-proclaimed military chief.

Turkey has begun deploying soldiers to Libya after Parliament approved a motion responding to the country’s call for Turkish troops last week, President Recep Tayyip Erdoğan announced late Sunday. 35 military personnel headed by a lieutenant general have started work on the ground. The Turkish military squad will determine a place for a base in the first stage and will then provide military training to Libyan soldiers. The base will be a center from which ground, maritime and air elements will be coordinated.

Turkey is sending troops to the region to both defend its rights and support the Tripoli government recognized by the U.N. while the military units are not sent to enter the conflict but to strengthen the pursuit for a political solution, Burhanettin Duran, general director of the Political, Economic and Social Research Foundation (SETA) said during a panel on Turkey’s policy in the eastern Mediterranean organized in Washington.

Libya’s High Council of State, a body formed to end the civil war in the country in 2015, welcomed last week the passage of the mandate in a written statement saying “Countries such as the United Arab Emirates, Egypt, Russia and France support the war criminal Haftar, who has killed and tortured our people and committed destruction. This prompted us to seek legitimate support from our Turkish friends to protect our people. We welcome the adoption of the motion in Turkey’s Parliament.” Ankara is joined by Italy and Qatar in supporting Sarraj’s legitimate government in Tripoli.

The stance against Turkey has also brought together Israel and Egypt, which were at war several times throughout history. Although past economic agreements with Israel have been controversial in Egypt, where support for the Palestinians runs high, relations have been steadily warming with the recent developments in the region.

Speaking on the discontent of other countries, Ahmed Sewehli, a Libyan activist had told Daily Sabah previously, “by looking at the diplomatic responses from these countries which are attacking Libya it’s quite obvious that they are very nervous and are extremely unhappy with the Turkish intervention. The reason behind this is that basically they had an open goal and an open field to do what they want without any forces except the untrained local forces who have very little weaponry stopping them.”

On the same panel in Washington, Altınbaş University rector Çağrı Erhan underlined that Greece and the Greek Cypriot administration allocated a significant part of the Mediterranean to themselves due to the natural resources found in the region, adding “Turkey signed a deal with Libya’s Government of National Accord to protect its rights within the framework of Turkey’s and the Turkish Republic of Northern Cyprus’ (TRNC) continental shelf.”

Libya and Turkey signed agreements in November outlining cooperation in terms of security and maritime affairs, angering Mediterranean countries, including Greece and the Greek Cypriot administration, of whom the diplomatic maneuver prevents from unilaterally exploiting energy resources in the region.

Foreign Minister Mevlüt Çavuşoğlu arrived in Algiers Monday for official talks on bilateral relations and regional developments with Algerian authorities. It was expected that the recent tensions in Libya in the face of Haftar forces’ attacks on the capital Tripoli would be on the agenda of the meetings.

Çavuşoğlu’s visit came after that of Sarraj, head of Libya’s U.N.-recognized Government of National Accord (GNA) who arrived in Algeria earlier Monday. The Algerian presidency said GNA head Sarraj arrived at the head of a high-ranking team to “discuss ways to resolve the difficult situation” in Libya. He met Algeria’s newly-elected President Abdelmadjid Tebboune and held a joint press conference.

“I know our friend Turkey is a great state, the relations between Turkey and Algeria are very close,” Tebboune said, adding he was pleased to welcome Çavuşoğlu.

“Algeria regards Tripoli as a red line and expects no one to cross it,” Tebboune also said at the news conference while calling on the international community and particularly the U.N. Security Council to fulfill their responsibilities for achieving peace and stability in Libya. Algeria shares nearly 1,000 kilometers of its border with Libya.

Çavuşoğlu in a statement on Twitter underlined that both countries were determined to improve relations.

More than 280 civilians and 2,000 fighters have been killed since the beginning of Haftar’s assault on Tripoli, according to the United Nations. The fighting has displaced some 146,000 people, with the ongoing violence threatening to plunge Libya into violent chaos to rival the 2011 conflict which led to the ousting and murder of longtime dictator Moammar Gadhafi.

Since the ousting of late leader Gadhafi in 2011, two seats of power have emerged in Libya – Haftar in eastern Libya supported mainly by Egypt and the United Arab Emirates, and the GNA in the capital Tripoli, which enjoys U.N. and international recognition.

Germany favors YPG among terrorist groups, disregarding the law
Next
Loading...
Loading...
We use cookies to ensure that we give you the best experience on our website. If you continue to use this site we will assume that you are happy with it.Ok