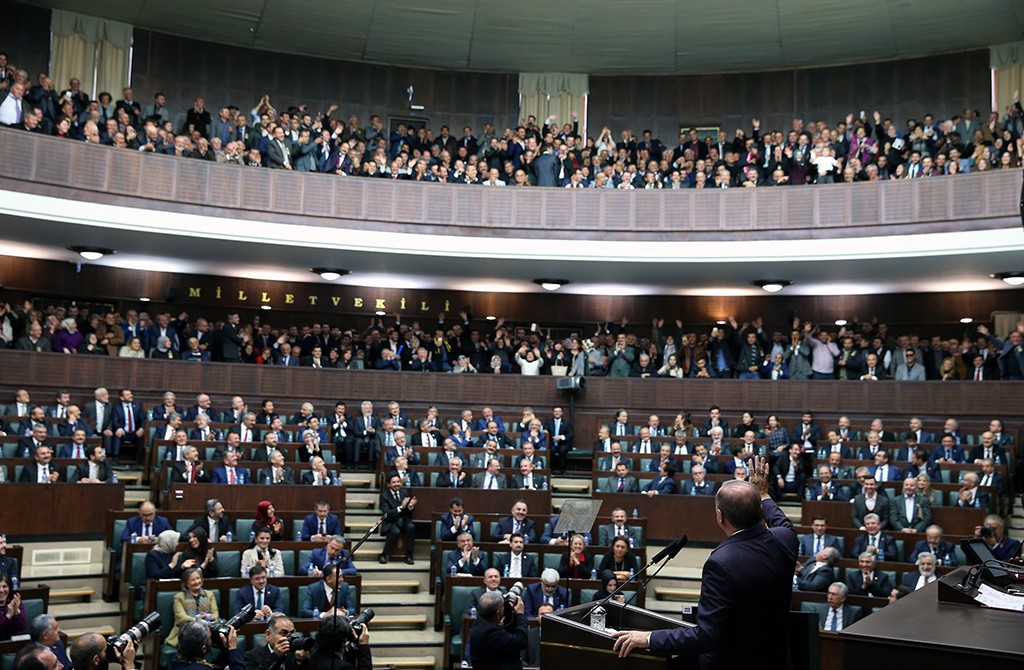 President and AK Party Chairman Recep Tayyip Erdoğan attended and delivered a speech at the Justice and Development Party’s (AK Party) Group Meeting at the Grand National Assembly of Turkey.

Turkey's Justice and Development Party (AK Party) turned 18 earlier this week. In power for 17 consecutive years under President Recep Tayyip Erdoğan's leadership, it has arguably outperformed all other movements in the multiparty era.

Turkey’s Justice and Development Party (AK Party) turned 18 earlier this week. In power for 17 consecutive years under President Recep Tayyip Erdoğan’s leadership, it has arguably outperformed all other movements in the multiparty era.

The energy of Turkey’s religious conservatives has been the driving force behind the AK Party. At the same time, the movement successfully reached out to other social groups by fulfilling promises of democratization, economic development, welfare and security. So much has happened under the AK Party that Turkey has witnessed many ideas, concepts and actions, once visions for the future, in practice. During this period, the country’s capabilities and options have withstood the ultimate test. Located in a difficult region, Turkey pushed the democratization-security dilemma to its limits.

We witnessed the liberalization of Turkey’s relations with the European Union and the process of globalization. At the same time, the country set the stage for a national-native resistance over national interests. Democratization and reform went hand in hand with questions of survival and counterterror campaigns.

Those developments made the AK Party Turkey’s most hotly debated political movement.

Various groups criticized Erdoğan’s party for its pragmatism and willingness to adapt. As such, the movement was labeled as pro-Western and pro-American at times and blamed for turning Turkey’s back on the European Union and the Western alliance at others. Observers criticized it for surrendering the Turkish economy to aggressive liberalism as well as meddling in the market economy.

That those developments took place under Erdoğan and the AK Party must be analyzed carefully. To approach this complex phenomenon with references to the movement’s “loss of reformist zeal” or “corruption in power” would make us miss important parts of the puzzle. Blaming the AK Party without engaging the reasons behind the EU accession’s failure and the hefty price tag of Washington’s misguided Syria policy is too simplistic. That approach does not offer a solution to the challenges that Turkey faces either.

It is possible to understand why the opposition would point fingers at the AK Party; yet, the current process of intense self-criticism among religious conservatives, whose demands the movement indeed met, is crucial. Taking stock and the search for a new direction are obviously needed, but constant reflection and incessant complaining has turned into a key weakness in AK Party circles. It is problematic to reproduce the opposition’s arguments and keep seeing the negatives. More importantly, I believe we have a historic responsibility not to trust the claim that religious conservatives have gone bankrupt.

The secularizing effect of modern life, for example, is a serious challenge beyond political power. The test of worldly benefits takes place on many levels, from the individual to society.

The conservative tendency to isolate themselves allowed the Republican People’s Party (CHP), the Good Party (İP) and the Peoples’ Democratic Party (HDP) to implement a new tactic. Seeing that their arguments can penetrate AK Party circles, opposition parties deliberately use positive language about conservatives. A recent CHP directive to “avoid discussions with voters on religious issues” was a case in point. Indeed, more will follow.

İP Chairwoman Meral Akşener already revealed the opposition’s strategy: “Reaching out to religious conservatives is our only shortcoming because Erdoğan erected a wall between us and them.” She believes that new movements can tear down that wall, facilitating outreach efforts. The push to remove Erdoğan and the AK Party from power, Aksener maintains, will succeed then.

The political arena is dynamic, and much can change at home and abroad over the next four years. The key issue, however, is how religious conservatives make sense of the AK Party’s power – i.e. their own power. This assessment must be realistic and focus on their own experiences rather than the dreams of others.

Turkey-US deal doesn't legitimize the YPG
Next
Loading...
Loading...
We use cookies to ensure that we give you the best experience on our website. If you continue to use this site we will assume that you are happy with it.Ok