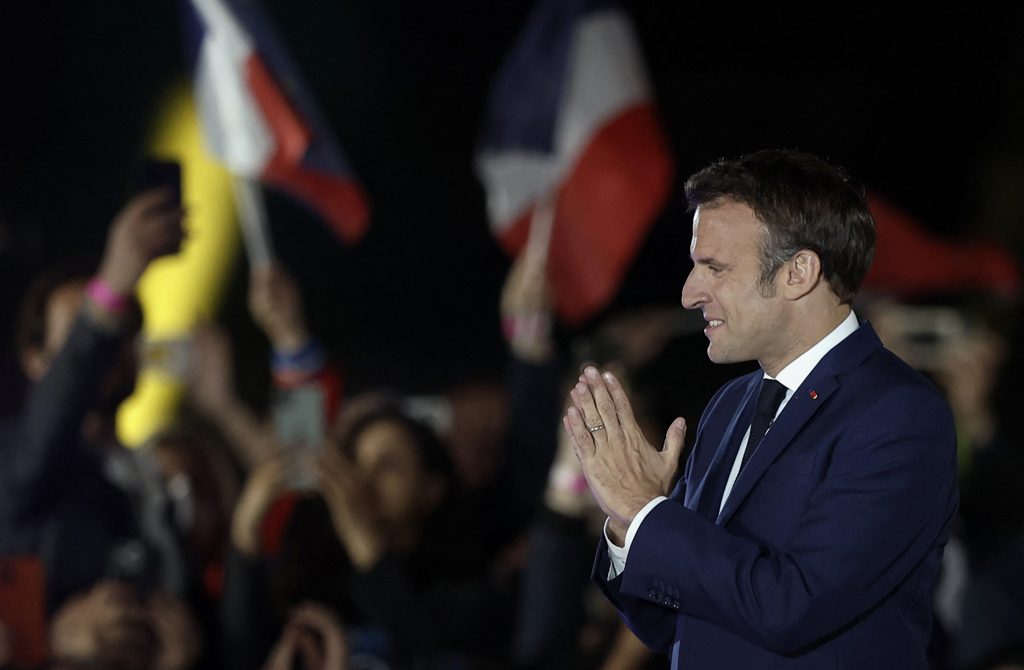 French President Emmanuel Macron gestures as he arrives to deliver a speech after being reelected as president, in Paris, France, April 24, 2022. (Reuters Photo)

France’s incumbent President Emmanuel Macron and the far-right National Rally’s (RN) Marine Le Pen secured the highest number of votes in the first round of the presidential election held on April 10 in France, paving the way for a face-off in the second round on April 24. According to the results announced by the Ministry of the Interior, in the second round, in which 72% of the eligible public voted, incumbent Macron was reelected after receiving 58.5% of the votes. His opponent, far-right leader Le Pen, won 41.5% of the vote. According to these results, Macron has started his second term in France.

The election results primarily show that Macron secured a weak victory in the election as his popularity has fallen in the five years while Le Pen’s has risen. Considering that Macron won 66% of the vote compared to his rival Le Pen’s 34% in the second round of the 2017 election, Le Pen has narrowed the vote gap between herself and Macron by 15% in the last five years. At this point, we can say the police violence against civilians during the yellow vest protests and the poor political and economic management of the coronavirus pandemic served as two of the main factors in Macron’s loss of power.

Also, the French voted for Macron in the second round not because they really believed in him, but because they did not want to see Le Pen as president. In other words, for Macron, who received 28% of the votes in the first round and 58.5% in the second, the difference of 30% represents those who do not want to see Le Pen in office, not those who support him. Indeed, the main factor behind Macron’s success is that he was able to gather the 19 million Le Pen opponents in the process leading up to the second round. As a matter of fact, after the second round results were announced, Macron clearly explained the situation in a statement: “Many of our compatriots voted for me not out of support for my ideas but to block those of the far-right.”

The 2022 presidential election also shows that the French society does not want to see a far-right leader in power yet. However, the fact that Le Pen received 41.5% of the votes, halving the gap with Macron since 2017, indicates that the far-right is one step closer to the Elysee Palace. In other words, it would not be surprising if the far-right leader comes to power in the 2027 election. Especially if the center-right and center-left, which completely failed in this election, cannot recover by the 2027 elections and fail to present a strong candidate or candidates to rival Le Pen, it seems inevitable that Le Pen will come to power in the next election. In this respect, we can see the 2022 presidential election as the first signal of the approaching threat of the far-right in power in France.

Finally, the Russia-Ukraine war, which started before the election, is one of the most important factors that facilitated Macron’s stay in power. The positive rhetoric of his rival Le Pen about Russia and Russian President Vladimir Putin before the war became an important trump card for Macron in the process leading to the second round. Indeed, in the conversation broadcast live before the second round, Macron tried to corner Le Pen by saying that the National Front had taken a loan from a Russian bank and that she was one of the first political leaders to recognize Russia’s annexation of Crimea in 2014. Le Pen’s inability to satisfactorily respond to these claims strengthened Macron’s hand.

There are three important issues on Macron’s new agenda. The first of these is related to the issue of inflation, which directly concerns French citizens. According to the data announced by the French National Institute of Statistics and Economic Research on March 31, 2022, consumer prices in France increased by 4.5% due to the increase in energy and food prices triggered by the Russia-Ukraine war. This caused discomfort in French society in the process leading up to the election. Under these conditions, the Macron administration tried to palliate citizens by increasing the minimum wage by 2.5% before the election. However, since inflation is still on an increasing trend, Macron will first try to solve the inflation problem in the new period, as he promised before the election.

Another important issue on Macron’s agenda for the new period is the Russia-Ukraine war. Macron, who tried to mediate between Moscow and Kyiv before the start of the war but was unsuccessful, seems poised to spend a lot of time on this issue in his second term. So much so that before the runoff, in a speech to a group of journalists, Macron argued that European countries should establish a dialogue with Putin, and warned that otherwise, the parties to establish peace in Europe would be non-European powers such as Turkey, India or China. This statement shows that Macron does not want to leave the task of ending the war to Turkey and will therefore attempt a new mediation effort between Russia and Ukraine in the upcoming period as an alternative to the talks in Istanbul.

The last issue on Macron’s new agenda has to do with the coming national parliamentary elections, which will take place in June this year. In this election, which is critical for the representation of Macron’s La Republique En Marche (LREM) in parliament, problems may arise between the legislature and the executive in the new period if the LREM cannot secure a majority. This, in turn, may limit Macron’s field of action in domestic politics. For this reason, Macron, who just emerged from the presidential election, will start the campaign for the national parliamentary elections, perceived as the “third round” by the French public, without a break.

As for the course of Turkey-France relations in the second Macron term, we should emphasize that bilateral relations have been subjected to a tough test in the last five years with Macron. After taking office as president, he put his country in tight competition with Turkey in Syria, Libya, Karabakh and the Eastern Mediterranean in order to prove himself to the French and European public. This power struggle caused the loss of rational ground in bilateral relations. However, at the end of the day, Turkey managed to protect its own national interests in these four competitive areas, which greatly disappointed the Macron administration. Therefore, in the process leading up to the 2022 election, Macron started to take some positive steps in order to return Turkish-French relations to a rational basis.

Here, we should mention that the Russia-Ukraine war brought Ankara and Paris closer. Following the start of the war, the Turkish and French presidents made a joint effort to end the war. As part of this process, Macron’s announcement after the EU summit held in March that France will launch a joint humanitarian operation with Turkey and Greece to evacuate civilians from Mariupol created positive expectations for increased cooperation in bilateral relations. Moreover, making a statement after the extraordinary NATO summit held in March, Macron announced that the tripartite cooperation efforts to include Turkey in the SAMP/T missile defense system, produced jointly by France and Italy, would be resumed. These subsequent statements created a positive agenda regarding the course of Turkish-French relations.

From this point of view, if the relatively positive atmosphere in bilateral relations continues, it is expected that Turkish-French relations will be back on track in the second Macron period and the two countries will prioritize cooperation rather than conflict on a rational basis. However, as mentioned above, it would be an overly optimistic approach to expect Turkey-France relations to follow a completely positive course in the second Macron term, as Macron wants to secure the title of the “hero” who ends the war in Ukraine.

Just before the second round, Macron declared that he does not want a France that prevents Muslims from eating as their religion dictates (meaning halal slaughtering) in order to appear cute to the Muslim voters. Despite this positive statement, we see that the record of Islamophobia during the first term of the Macron administration has been quite “successful.” Decisions, such as prohibiting the slaughter of poultry according to Islamic methods and establishing a whistleblowing hotline to combat so-called Islamic radicalization or the law “to strengthen respect for the principles of the Republic” that allows the secular state to intervene in the private life of Muslims in the country are just a few of the “successful” Islamophobic practices of the Macron administration.

Based on the concrete Islamophobic practices implemented in the first Macron period, it is expected that the previous decisions will be carried forward and new ones will be added in the second Macron period. This, unfortunately, paints a pessimistic picture for the country’s Muslim community in the upcoming period. However, we should here note that compared to the disaster scenario in which anti-Islamic Le Pen becomes president, Macron’s stay in office can be seen as the lesser evil.

Prolonged war has changed the balance in Ukraine
Next
Loading...
Loading...
We use cookies to ensure that we give you the best experience on our website. If you continue to use this site we will assume that you are happy with it.Ok