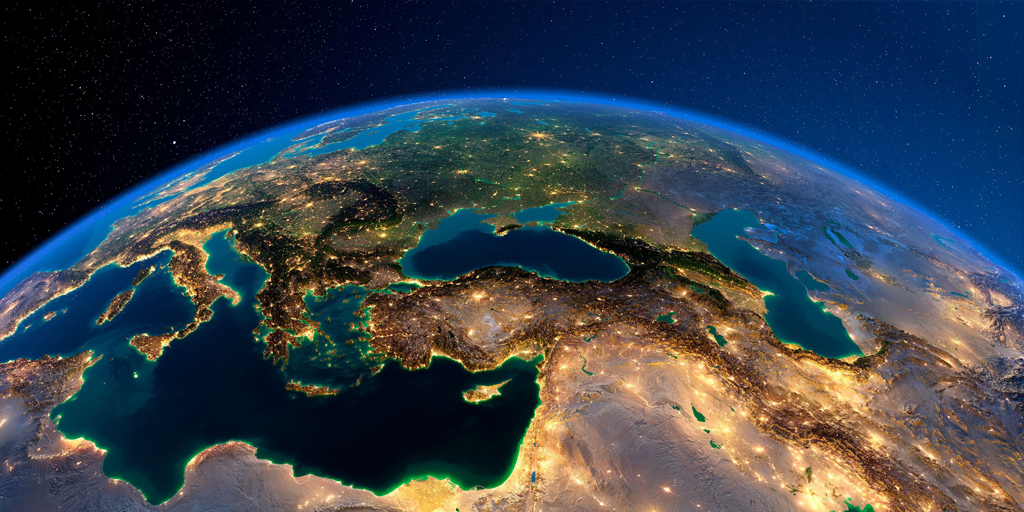 Planet Earth is lit by the lights of large cities, with Turkey seen at the center. (Photo by Shutterstock)

There has been increased activism in Turkish foreign policy in the last couple of weeks. This activism is a natural outcome of the committed and consistent efforts of Turkish diplomats, foreign policymakers and economic actors since the beginning of the coronavirus pandemic. Turkish decision-makers are trying to adapt to the new realities of the post-pandemic international order and are searching for new opportunities for political and economic cooperation within the emerging regional environment.

The latest COVID-19 omicron variant cases have not slowed down Turkey’s foreign policy activism. The official high-level contact at the presidential level, in particular, is a sign of the new routes in Turkey’s foreign policy engagement. The recent diplomatic initiatives are expected to produce more concrete political and economic outcomes in the coming months and years. In principle, Turkey’s current proactive diplomatic efforts aim to reduce existing tensions, resolve some of them if possible, extend the horizon of economic relations and boost trade volume by focusing on regions that have been largely ignored in the past.

This high-level of diplomacy was exemplified at the Economic Cooperation Organization (ECO) leaders’ summit in Turkmenistan’s Ashgabat that aimed to boost the region’s trade volume and at an Istanbul meeting of the Organization of Turkic States (previously known as the Turkic Council), designed to draw attention to Turkic states and further motivate the engagement of the member countries’ leadership. The 3rd Turkey-Africa Economic and Business Forum was a venue and initiative intended to strengthen Turkey’s political and economic relations with African countries, which have consistently risen for more than a decade. President Recep Tayyip Erdoğan officially visited 30 African countries during his more than 50 official visits to African countries.

Turkey’s active political and economic engagement in the aforementioned countries and regions created positive momentum for strengthening ties in an era of relative diplomatic inertia. Improving economic relations based on mutual gain and championing diplomatic dialogue and consultation are key to implementing the underlying logic of the mentioned summits. These recent efforts are not alternatives for Turkey but rather supplements to other regular meetings, such as the G-20 leaders’ summit.

A new era with Abu Dhabi

Turkey’s foreign policy was challenged by the conflicts and regional tensions in the Middle East and North Africa (MENA) region for more than a decade. Turkey and the United Arab Emirates (UAE) were on opposite sides in almost all regional tensions since the beginning of the Arab Spring. Abu Dhabi Crown Prince Sheikh Mohammed bin Zayed Al Nahyan’s (MBZ) recent visit to Ankara is also a turning point in improving Ankara-Abu Dhabi relations. The Turkish-UAE normalization may change the balance of power in the region and may help mitigate significant regional tensions. Turkey and the UAE have spent considerable energy to counter each other in the regional competition of power for more than a decade. The two countries have engaged in a fierce competition of geopolitical and ideological influence.

If Ankara and Abu Dhabi can manage to join forces through their current rapprochement effort, they may contribute to positive synergy to reduce inevitable tensions in the region. Both Turkey and the UAE are focusing on transforming their economic models. Turkey aims to boost its export-oriented growth model by adding new high-tech products; whereas the UAE hopes to prepare itself for the post-oil economy. Both countries have expressed interest in integrating their trade, manufacturing and investment capacities. Erdoğan recently declared that he will be visiting Abu Dhabi in February 2022. This signals the deepening of the political and economic collaboration and cooperation between Ankara and Abu Dhabi. The gradual normalization of Turkish-Egyptian and Turkish-Israeli relations may also develop in the coming months.

Turkish foreign policy was challenged by the conflicts of the MENA region for almost a decade. Many conflicts such as Syria, Iraq, Lebanon, Libya and Yemen have yet to be settled. The prospects of peace in those countries are grim, at least in the short term. The instability in those countries continues to negatively affect Turkey’s security. The ongoing conflicts also reduced the potential for strengthening economic ties.

The ongoing tensions in Crimea and the Donbass region between Ukraine and Russia and the tensions between Azerbaijan and Armenia are also significant concerns for Turkey. Turkey is closely monitoring the possibility of uncontrollable escalations in the Black Sea and Caucasus regions as well. The political stability in Sudan, Tunisia and Bosnia-Herzegovina are also followed closely by Ankara. In addition, Greece’s rising maximalist claims and Greek authorities’ anti-Turkey statements and anti-Turkey alliances generate concerns in Ankara. Ankara has maintained its sober position vis a vis Athens, but Turkish authorities are alarmed by the potential tensions in the Eastern Mediterranean. Turkey’s initiatives to improve relations with Egypt and Israel may balance Athens’ unrealistic expectations. It is clear that Turkey still needs to engage more actively and constructively to reduce the risks that may emanate from the existing tensions.

All the ongoing civil wars, asymmetric conflicts, hybrid wars and political tension in those countries and regions have negative consequences for Turkey’s security and the Turkish economy. The conditions of the pandemic helped to soothe some existing conflicts; yet, there is significant potential for those tensions to re-escalate after the pandemic. The current trends of armament and troop deployments confirm the concerns of the experts.

Within the context of the ongoing pandemic, economic activity in many parts of the world has slowed down. Due to the political instability, precious resources are being allocated to the security sector and arms buildup in the surrounding regions. This is not a positive sign for the future of regional peace and stability. Reducing the risks and costs of security, improving new trade and economic opportunities to boost joint interests and generating better communication venues to reduce the diplomatic tensions are some ways to mitigate potential risks.

Since the beginning of the pandemic, most international relations experts have predicted that the world order will be quite different once the dust settles. So far, prominent international actors have been unable to improve solidarity to overcome the problems generated by the health crisis. Significant risks await Turkey in the post-pandemic global context, but rather than choosing a defensive approach, Turkey also tries to explore new opportunities. With its recent diplomatic activism, Turkey tries to reduce regional tensions and uncertainties, generate new economic opportunities and boost its resilience to potential shocks.

Turkmenistan visit and Turkic world's search for integration
Next
Loading...
Loading...
We use cookies to ensure that we give you the best experience on our website. If you continue to use this site we will assume that you are happy with it.Ok