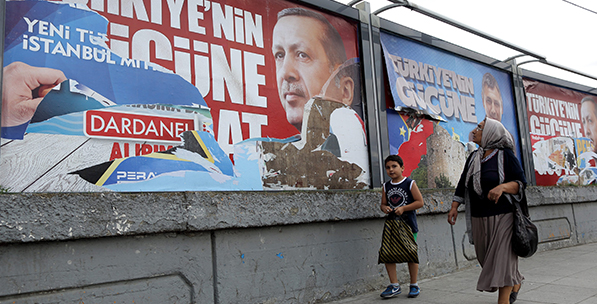 Lessons of the Presidential Election

The opposition leadership, however, continued to rely on the political engineering skills of their allies and sought to exploit the anti-Erdoğan sentiments of their base instead of setting out a concrete roadmap for the future.

Campaigning in Turkey’s presidential election has ended. Over the past few weeks, presidential candidates have had plenty of opportunities to make the race more competitive and exciting than the previous local and parliamentary elections. As a matter of fact, the Supreme Electoral Council (YSK) expected the contenders to run intensive campaigns over a short period of time. On Aug. 10, 2014, the people have directly elected the country’s president for the first time in the Republic’s 90-year history, which added to the symbolic value of yesterday’s election. Meanwhile, the nomination of Prime Minister Recep Tayyip Erdoğan by the ruling Justice and Development Party (AK Party), and his statements about exercising the entire range of presidential powers under the 1982 Constitution has created fertile ground for over-reliance on anti-Erdoğan sentiments, which has been the opposition’s election strategy of choice in recent years. In the most recent local elections on March 30, 2014, the Republican People’s Party (CHP) and the Nationalist Movement Party (MHP) received enough combined votes to balance out the AK Party supporters and therefore made it easier for the opposition to make a strong effort in the presidential election.

What actually happened, however, was quite different: The presidential race was neither exciting nor competitive. Presidential candidate Ekmeleddin İhsanoğlu and the chairmen of the CHP and the MHP, the two main sponsors of his campaign, did not organize major campaign events. Meanwhile, Selahattin Demirtaş, who ran on behalf of the Kurdish political movement, addressed crowds whose size could not measure up to the masses that came together for campaign events during previous parliamentary elections. Sure enough, Prime Minister Erdoğan was the only contender whose campaign strategy was reminiscent of parliamentary elections in the sense that he addressed the crowds at over 30 campaign rallies. Despite his clear advantage ahead of the historic vote, Erdoğan took the campaign seriously and outclassed his opponents with help from mass public events. The fact that Prime Minister Erdoğan’s challengers opted for small gatherings with NGO representatives and exclusive interviews with various media outlets raised questions about the future of large public events in election campaigns. It is important to touch upon the relative lack of interest in the presidential election, which, as a matter of fact, represents a much more symbolic contest than parliamentary and local elections.

The primary reason behind the campaign season’s relative lack of excitement related to the broadly-shared view, including among AK Party and opposition ranks, that another election victory for the prime minister was already a foregone conclusion. Popular perceptions about the presidential race was largely informed by the outcome of the March 30 local elections, when the opposition parties turned the local races into a vote of no confidence for the AK Party government and effectively transformed the local elections into a de facto first-round vote for the presidential election. Having been reduced to bringing down Prime Minister Erdoğan’s government, the 2014 local elections marked a landslide victory for the ruling AK Party and led a sizeable chunk of political analysts and voters to believe that Erdoğan would win the presidential race if he opted to run for the highest public office in the country.

The aforementioned belief that the race had been lost before election day became further aggravated when the opposition parties made the wrong decision about their joint candidate. Had they learned the lessons of the March 30 local elections and kept in mind the radical changes that the presidential election would entail, the opposition camp could have turned the people’s early perceptions around and persuaded their supporters that the joint candidate could still clinch victory on Aug. 10. The opposition leadership, however, continued to rely on the political engineering skills of their allies and sought to exploit t

President Erdoğan's Mission
Next
Loading...
Loading...
We use cookies to ensure that we give you the best experience on our website. If you continue to use this site we will assume that you are happy with it.Ok