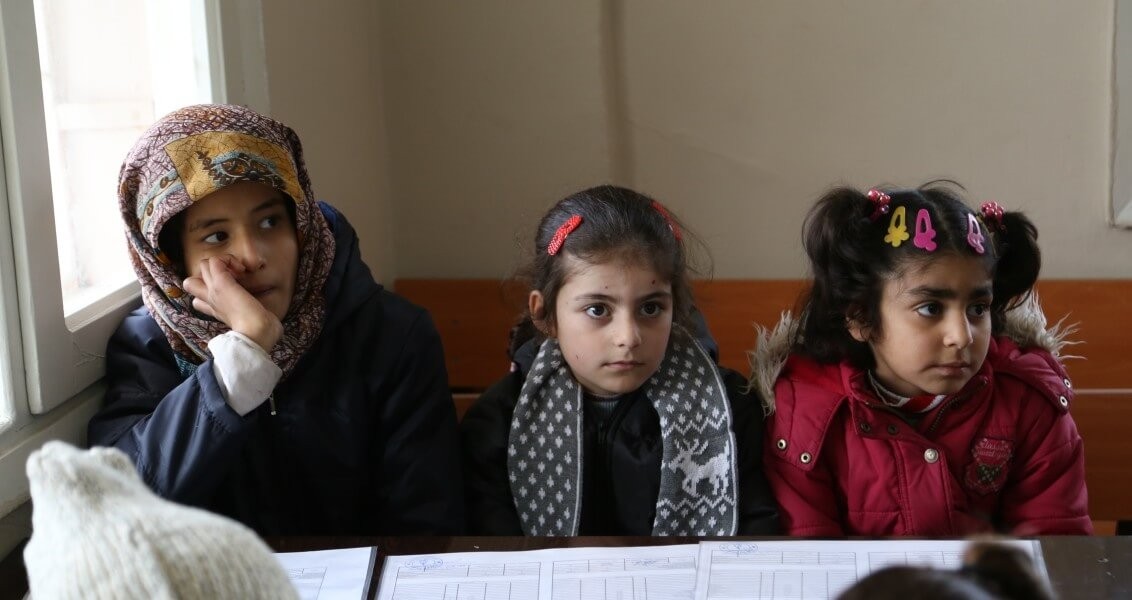 A new report by SETA and Theirworld highlights the need to overcome language barriers and urges for more international aid to sustain the education of Syrian refugees, 41 percent of school-aged children are still not in school

Education is a key concern for Turkey, which is embattled with the influx of refugees from its war-torn neighbor Syria. Despite ongoing efforts, some 41 percent of refugee children of school age in Turkey remain out of school due to various factors.

A report by Turkish think tank The Foundation for Political, Economic and Social Research (SETA) and Theirworld, an international charity for children, says that language barriers and low international support to Turkey for schooling are the main obstacles to increasing the schooling rate.

Of the 3 million Syrian refugees in Turkey, 833,039 are school-age children between the ages of 5 and 18. Yet, figures show that Syrian students schooled in Turkey in the past academic year were only 492,544.

A majority of them are enrolled in temporary education centers set up exclusively for refugee children while the rest were enrolled in public schools.

In his foreword to the report, SETA General Coordinator Burhanettin Duran says the integration of Syrians into social life is crucial in Turkey, “the country in which the largest number of refugees has taken shelter.”

Duran underlined that education is an important factor for their social inclusion “as students are faced with the risk of becoming a lost generation when they are distanced from educational opportunities due to the crisis.”

Since 2011, Syria has been locked in a conflict that shows no sign of ending any time soon, especially with the emergence of new actors such as the Daesh terrorist group.

Though a low number of refugees have returned to their homeland after the liberation of Daesh-held towns by the Syrian opposition, most are expected to stay in Turkey longer than first expected, experts say.

Children make up a substantial portion of the refugee population that fled their devastated country for Turkey, Lebanon and Jordan and are among the most vulnerable.

The report says that international funding was not sufficient given the need. Citing the Ministry of Education, the report says financial support covers only 10 percent of the current school and classroom requirements in Turkey.

A plan by the EU, which is part of a deal between Turkey and the EU, is among the few large-scale education projects catering to Syrians. Promoting the Integration of Syrian Children to Turkish Education System, or PICTES, project has a budget of 500 million euros and more than half of the budget aims to increase the quality of Syrians’ education.

Language barrier is “at the forefront” of obstacles to higher schooling rate, according to the report which urges designing mechanisms for Syrians both acquire Turkish skills and preserving their native language and culture.

Researchers say long-term solutions are needed to address the problem of lack of schooling among Syrians. They say that temporary education centers may be effective but they are not a sustainable model in the long run and it is necessary to integrate refugees within the public school system of Turkey and advise integrating Syrian teachers at those centers in the education system as well.

Though Turkey embraces refugees at a national level with no rampant anti-refugee campaigns as is the case in Europe, Syrians still need to be integrated into the society according to other studies.

The SETA report suggests providing adaptation programs for Turkish students to “enhance their tolerance toward Syrians.”

The report also delves into reasons why Syrian refugees opt not to send their children to schools or education centers.

One factor is single parenting and related economic reasons. Particularly Syrian women who lost their spouses in the ongoing war do not allow, usually their eldest son, to attend schools so that they can help the family to earn a living as a substitute for the father. People interviewed for the report say that many of the school-age children who are not in school are working. The report also links low schooling to “mobility rates” of Syrian families, which often move from city to city in pursuit of a better life.

Breaking Down Barriers: Getting Syrian Children into School in Turkey
Previous