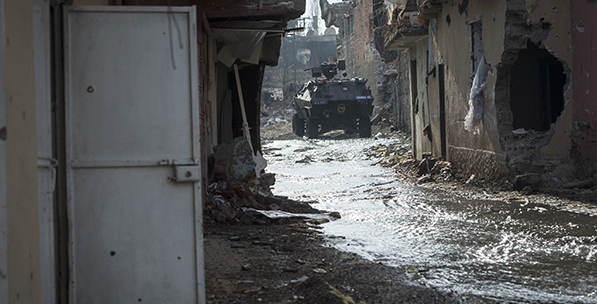 The HDP made significant progress in the political arena, but it must keep in mind that a toxic mix of violence and cross-national alliances will not secure legal status for their voters.

The Syrian civil war has triggered two crucial developments in the Middle East. The first is a sectarian divide across the Islamic world and the second is an ethno-nationalist quest for legal status.

The first challenge manifested itself in the form of Shiite expansionism and radical Salafist movements, which have been fighting proxy wars in the region. The second challenge, in turn, took the form of Kurdish nationalism. Fueled by the interests of great powers in reshaping the Middle East and regional powers’ desire for more power, both trends have brought about a significant amount of destruction.

Personally, I believe that the future of Kurdish nationalism and its impact on the region is more important than sectarian tensions. The Cold War’s end, followed by 9/11 and the Arab Spring, empowered Kurdish nationalists and created a friendly environment for their quest for legal status. In the aftermath of the U.S. invasion of Iraq, they formed a regional government in Northern Iraq. Now, Kurdistan Regional Government (KRG) President Masoud Barzani is seeking to gain independence from Baghdad. Since the rise of DAESH, the Democratic Union Party (PYD) leadership in northern Syria has been trying to accomplish the same thing. In a way, the shortcomings of the Syrian and Iraqi governments rendered the quest for legal status irreversible.Inevitably, however, the situation in Turkey and Iran are more complicated. Although Tehran has thus far kept its Kurds under control, Ankara has been fighting Kurdish separatists. Excited by the opportunities in northern Syria, the PKK leadership unilaterally ended the two-year cease-fire in July and proceeded to engage the security forces in residential areas. According to the Peoples’ Democratic Party (HDP) leadership, Kurdish autonomy, or self-rule, is a right under international law.

Another important accomplishment that Turkey’s Kurdish nationalist movement made was to create dozens of organizations such as the HDP, PKK, Kurdish Communities Union (KCK) and Patriotic Revolutionary Youth Movement (YDG-H) under the command of the PKK leadership in Northern Iraq’s Qandil Mountains. The multitude of PKK-affiliated organizations provides them with a crucial opportunity to simultaneously use diplomatic channels and armed militias to target security forces and civilians.

At a time when the PYD’s armed People’s Protection Units (YPG) mobilize local communities for a Western- and Russian-backed resistance in northern Syria, the KCK and YDG-H are fighting for self-rule. The HDP, in the meantime, engages in diplomatic talks in capitals around the world and claims that the trenches reflect the people’s need to defend themselves. By criticizing Turkish foreign policy, they have been asking Washington and Moscow to contribute to the PYD campaign a little more. To be clear, HDP Co-Chair Selahattin Demirtaş recently visited the United States, Russia and Belgium not to speak his mind as a politician, but to get Western powers involved in the Kurdish nationalist movement’s bid for legal status.

Provided that Washington has little more to contribute, the HDP turned to President Vladimir Putin’s Russia for support. In response, Russian Foreign Minister Sergey Lavrov reiterated his government’s commitment “to actively cooperate with Kurdish groups that are fighting ISIS [DAESH] in Syria and Iraq.” Receiving support from the Kremlin, which has been practicing Cold War politics against Turkey since it downed a Russian jet, could be poisonous. For years, the relationship between Kurdish nationalists and “imperialists” has been in question. Under the circumstances, it is quite likely that Kurdish nationalists will be seen as traitors serving U.S. or Russian interests in the Middle East.

The HDP made significant progress in the political arena, but it must keep in mind that a toxic mix of violence and cross-national alliances will not secure legal status for their voters. Instead, there is a good chance that the current game plan will raise further questions about the HDP’s legitimacy and marginalize its demands.

Is Negotiating With the PKK Still Possible?
Previous

Self-Governance: The PKK's New Weapon
Next
Loading...
Loading...
We use cookies to ensure that we give you the best experience on our website. If you continue to use this site we will assume that you are happy with it.Ok