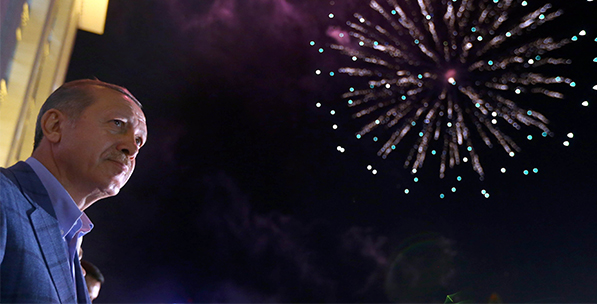 Erdoğan's victory on Aug. 10, despite serious attempts to undermine his administration, marks the beginning of a new era in Turkish politics.

The political developments of the last couple of years hovered around the 2014 presidential election. Prime Minister Recep Tayyip Erdoğan’s potential bid and the emergence of the Presidential Palace as the political system’s new focal point in line with the 2007 constitutional amendments had concentrated all attention on the presidential race. Meanwhile, pundits interpreted all domestic and international developments during this period with reference to Erdoğan’s candidacy, as the country encountered a series of revolts, political engineering efforts, alliances and plots.

Erdoğan’s victory on Aug. 10, despite serious attempts to undermine his administration, marks the beginning of a new era in Turkish politics. Given the presidential election’s political significance, it is safe to say that the Erdoğan presidency will reshape the country’s political landscape and have serious effects on opposition parties in at least four areas. How individual parties will react to changes in these areas will set the future course of politics in Turkey.

First and foremost, the presidential vote has triggered a quest for a new chairman and prime minister from among the AK Party ranks. The most successful political circle in the history of Turkish democracy is thus faced with a vital question that closely relates to protecting the party, its mission and its popularity. As such, AK Party executives will pick Erdoğan’s successor according to a number of criteria, including the ability to work with the Erdoğan, keeping the party popular and loyalty to the AK Party’s positions on domestic and international issues. Thus far, all signs point to Foreign Minister Ahmet Davutoğlu whose new role would no doubt have serious repercussions for his party as well as the country.

The nature of Erdoğan’s presidency represents another key area, since the 2007 constitutional amendments and his political background challenge the president’s traditional role in Turkish politics. Erdoğan’s inauguration, therefore, will introduce the nation to a new type of president, which he described as a strong president, in his relations with the government and other political parties.

Furthermore, how the election results will transform the opposition parties remains to be seen. The Republican People’s Party (CHP) and Nationalist Movement Party (MHP) have long settled for a politics of alliance on the basis of “anti-Erdoğanism” instead of developing the kind of political vision that their bases urgently need. The presidential vote, however, has raised serious questions about their over-reliance on polarization and identity politics. While Erdoğan, around whom the politics of alliance has emerged, assumed a new position outside the domain of party politics, opposition candidate Ekmeleddin İhsanoğlu failed to impress voters who, for the record, sent a strong message to opposition leaders by either not going to the polls or voting for İhsanoğlu’s opponents. Although the chairmen of either party have not lost their seats yet, the pressing need for change will compel both the CHP and the MHP to reform their platforms.

Last but not least, the Kurdish political movement’s commitment to appealing to voters across the nation will have a serious influence on Turkey’s political agenda. Having emphasized civilian politics over military struggle against the backdrop of the Kurdish peace process, the movement had started looking for ways to expand its base. Nominating Selahattin Demirtaş for president represented a premature challenge for the movement’s new agenda that, considering the number and geographical distribution of his supporters, pointed to the electorate’s interest. Although Demirtaş could not pierce the 10-percent threshold (having received 9.8 percent), a psychological barrier for the movement, his popularity nonetheless sends a strong signal in favor of a greater emphasis on civilian politics. Keeping the latest election results in mind, it would be no surprise for the Kurdish political movement to achie

All Power to Erdogan
Next
Loading...
Loading...
We use cookies to ensure that we give you the best experience on our website. If you continue to use this site we will assume that you are happy with it.Ok