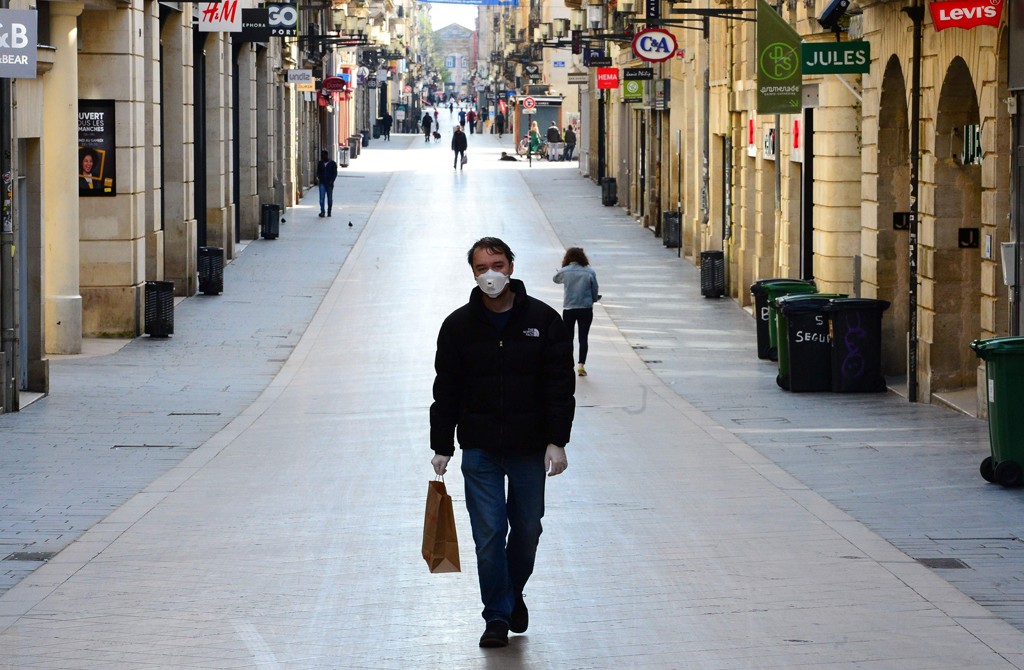 A man wearing a protective mask and gloves walks down a near empty St. Catherine Street in the southwestern French city of Bordeaux, Friday, March 20, 2020. (AFP Photo)

It’s time to come together for coronavirus diplomacy

Turkey’s Health Minister Fahrettin Koca has become the embodiment of the country’s fight against the coronavirus. He urged everyone last week to “declare their own state of emergency” – possibly suggesting that the Turkish government was not prepared to impose an official curfew yet.

Turkey’s Health Minister Fahrettin Koca has become the embodiment of the country’s fight against the coronavirus. He urged everyone last week to “declare their own state of emergency” – possibly suggesting that the Turkish government was not prepared to impose an official curfew yet.

Despite Koca’s emphasis on personal precautions, his idea of declaring one’s own state of emergency essentially summarizes what the world’s leading nations are doing to stop the pandemic. Each country has been taking precautions to the best of their ability. In other words, everyone has been trying to protect themselves. The fact that nations around the world focus on their own problems in case of a disaster is hardly surprising. It seems, going forward, all countries will pursue some level of self-sufficiency in fundamental areas – including health care. Yet the problem at hand is far more complex than the assertion that globalization is dead and the time has come for the rebirth of nation-states.

Indeed, the initial response to the pandemic was notably devoid of international cooperation, solidarity and coordination. The European Union’s refusal to send medical supplies to Italy and Serbia established a precedent that the idea of European solidarity was a fairy tale.

Matteo Salvini, who chairs the right-wing Lega Nord, said, “Italy needed help and it has been given a slap in the face,” complaining that Europe would do nothing but watch the stock exchange collapse. To be clear, in light of the EU’s helplessness on irregular migration, Italy’s loneliness was hardly surprising. Nor is anyone sure that any government heeded U.N. Secretary-General Antonio Guterres’ warning: “If we let the virus spread like wildfire – especially in the most vulnerable parts of the world – it would kill millions of people. Our world faces a common enemy. We are at war with a virus.”

U.S. President Donald Trump, who should have been expected to show some leadership in the face of a global virus outbreak, did not attempt to mobilize international organizations. The EU and others, too, kept their silence. To the best of my knowledge, there have been no high-level meetings outside of President Recep Tayyip Erdoğan’s teleconference with the leaders of Britain, France and Germany.

In an attempt to save his reelection campaign, Trump is busy blaming the pandemic on China. He will possibly even build his campaign around the idea that a Chinese virus has inflicted damage to the U.S.

The question is, how long can world leaders keep going like this? Are people around the world ready for a significant decline in their living standards if, say, the global supply chain were to break down? To what extent can we limit the free movement of goods, people and capital?

According to French President Emmanuel Macron, this is just the beginning. In other words, the war on COVID-19 must be fought over a long period of time. If the idea that future historians will make a distinction between the years before and after the coronavirus has already taken hold, it is safe to assume that this pandemic will radically change the world. This change will likely impact the economy, everyday life and all social norms.

If we will fight this virus in the coming years, rather than weeks or months, the knee-jerk reaction of everyone trying to protect themselves won’t lead to success. The world cannot afford to let a propaganda war between the United States and China spin out of control. We will need international cooperation, solidarity, and coordination instead.

Some selfish and reckless mistakes have indeed been made. China kept the world in the dark about the virus, turning the outbreak into a pandemic. Italy and Iran suffered many casualties for failing to take precautions in due time. President Trump, who initially dismissed the virus as a nuisance, finally came to terms with the pandemic. As we all look for ways to deal with this global health emergency’s repercussions, the pursuit of joint action against the virus must be on everyone’s agenda.

This cannot wait – it’s time for some corona diplomacy.

How prepared are we for a new global crisis?
Previous