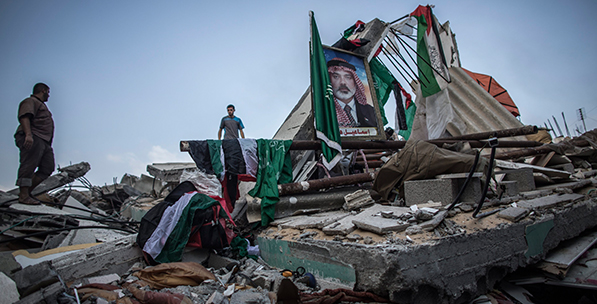 What did Israel want to achieve in its latest assault on Gaza? What does the Palestinian reconciliation reveal at this current stage of the Israeli Palestinian conflict? Have the international and regional perceptions changed with this latest attack on Gaza?

On July 7 2014, under the code name “Operation Protective Edge” (“Operation Strong Cliff” in Hebrew, or Mivtza’ Tzuk Eitan,), Israel launched a military aggression on the Gaza Strip. Home to 1.8 million Palestinians, Gaza witnessed the third Israeli air aggression in the last 7 years, extending to a ground invasion on July 18, 2014.

Causing a greater volume of humanitarian disaster than the two first operations combined; the recent Israeli attack was described by US Secretary of State John Kerry as “a hell of a pinpoint operation.” According to the latest situation report published by United Nations Office for the Coordination of Humanitarian Affairs (OCHA), the Israeli assault has caused the death of 1,976 Palestinians and 67 Israelis (64 soldiers). In addition, 380,000 people have been displaced and 16,800 homes in the Gaza Strip have been destroyed or severely damaged.

Israel’s official narrative holds that the operation was initiated as a revenge for 1) the kidnapping and subsequent killing of three Israeli settlers in Hebron attributed to Hamas and 2) the continuing launching of rockets by the resistance groups from Gaza. Convenient to its storyline, the Israeli timeline of recent events is leaving quite a bit of the story untold. At a very fundamental level, no footnote regarding the history of the Israeli government’s expansionist and annexationist agenda is inserted, let alone hinted. While the space allocated here does not permit for an exhaustive overview of Israel’s history of disposition of the Palestinian people, it is however worthy to rethink the point of departure of the most recent assault on the Palestinian people. The trigger for the latest operation was indeed the unity government emerging from the reconciliation of Hamas and Fatah. The reconciliation as a starting point provides a sober understanding of Israel’s military and political objectives in its latest assault on Palestinians in Gaza and the West Bank.

All Power to Erdogan
Previous

Russia and Egypt: Déjà Vu?
Next
Loading...
Loading...
We use cookies to ensure that we give you the best experience on our website. If you continue to use this site we will assume that you are happy with it.Ok