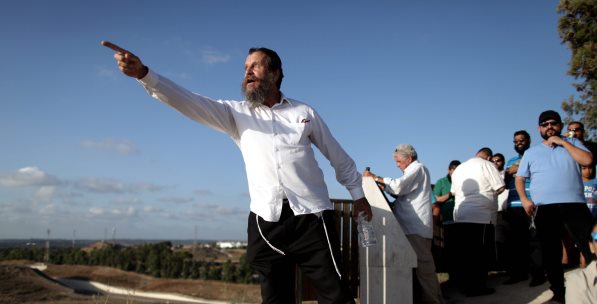 Almost every Zionist practice that Palestine has had to endure bear either direct or symbolic resemblance to Nazi policies.

In 2004, a year before Israel’s unilateral disengagement from the Gaza Strip, Dov Weissglass, éminence grise to Ariel Sharon, explained the initiative’s purpose to an interviewer from Haaretz: “The significance of the disengagement plan is the freezing of the peace process … And when you freeze that process, you prevent the establishment of a Palestinian state, and you prevent a discussion on the refugees, the borders and Jerusalem. Effectively, this whole package called the Palestinian state, with all that it entails, has been removed indefinitely from our agenda. And all this with … a [U.S.] presidential blessing and the ratification of both houses of Congress …

The disengagement is actually formaldehyde. It supplies the amount of formaldehyde that is necessary so there will not be a political process with the Palestinians.” ( Israel Mows the Lawn, Mouin Rabbani, London Review of Books ) Israel has almost never moved away from the 2004 plan. The Palestinians, who saw leaflets, followed by bombs, raining down on their neighborhoods, continued to be pushed toward a small piece of land which amounts to 41 kilometers in length and 12 kilometers in width. In Gaza, the world’s most densely populated area with over 5,000 people per square kilometer, the great push toward the town center looks awfully similar to Nazi concentration camps.

Each time Israel, in cooperation with the el-Sissi regime, destroys a tunnel, the Palestinian population gets pushed a little further toward the center. Creating a no man’s land in Gaza to shrink the strip by 40 percent, Israel’s most recent occupation has relocated the Palestinians from the open air prison they called home to the town center.

Almost every Zionist practice that Palestine has had to endure bear either direct or symbolic resemblance to Nazi policies. The tunnels represent one such example. “Into the Tunnel,” the award-winning biography of 11-year old Marion Samuel who died at Auschwitz in 1943, was borrowed from a sentence that Samuel said about the Jews running away from the Nazis: “People disappear into the tunnel.” Seventy years later, the tunnels are back on Israel’s agenda.

For the past two weeks, the most popular image in U.S. and Israeli media features a Jewish soldier standing inside one of the tunnels leading from Gaza to occupied territories. “Terror Tunnels,” the caption reads.

Surely enough, the image of a Jewish soldier inside the tunnels embodies the perfect portrait of Israel. Having surrounded the Palestinians and, by extension, itself, with apartheid walls, Israel is now stuck in the tunnels. The rational and moral qualities that emerged out of all the suffering the Jews endured at the hands of Nazis amounts to little more than what the world witnesses in Gaza today. The learning curve of a tribe, which suffered the most sophisticated and cruel form of slaughter through German engineering, only leads to occupation. Can Israel escape the tunnel in which it fell? It looks difficult. After all, the Zionist project built upon Eretz Israel has no vision for future, as it merely seeks to reconstruct the past. It is therefore impossible for Israel to see a light at the end of the tunnel, let alone escape it. As Samuel said, they will continue to “disappear into the tunnel.”

When I was writing these lines, Alan Dershowitz, who has been commentating on the heaviest bombardment of Gaza since July 6 on CNN, argued that “Israel is under attack from the underground, the sea, and the air,” and added: “Just consider how many Jews will die if Israel does not attack Gaza and destroy Hamas.” So this is the final vision. What a moment of madness!

Ukraine, Gaza and the New World Order
Next
Loading...
Loading...
We use cookies to ensure that we give you the best experience on our website. If you continue to use this site we will assume that you are happy with it.Ok