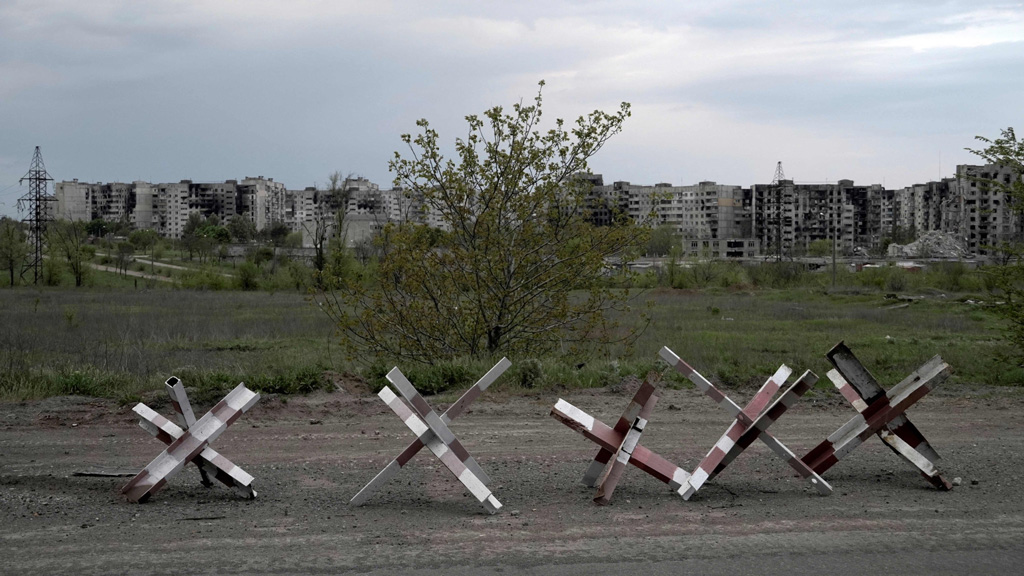 A view of the Ukrainian Black Sea port city of Mariupol amid the ongoing Russian military action in Ukraine, May 9, 2022. (AFP Photo)

Is there a chance for sustainable cease-fire in Ukraine?

To mitigate the negative impacts of the prolonged war in Ukraine, Turkey's solution for a sustainable cease-fire can be adopted by all sides

Kyiv did not initiate the Ukrainian war and it’s obvious that it will not end it either. When President Recep Tayyip Erdoğan explained that he will suggest Russian President Vladimir Putin find an “honorable exit” from Ukraine and end the war, it was not welcomed by the warring sides. For Russia, its objectives are not fully realized yet. For the Ukrainian government, a complete withdrawal from all Ukrainian territories, including the Crimean Peninsula and the Donbass region, is the only way to reach a solution and a cease-fire.

It is clear that these two perspectives are not feasible under the current conditions. In other words, given the balance of power between Ukraine and Russia, the demands of the warring sides can be considered maximalist. Therefore, a compromise and middle ground is needed in order to reach a solution. That is, both sides have to give up some of their expectations.

Ukrainian territorial integrity was damaged as a result of the consistent intervention of both the Western countries and the Russian Federation into the domestic affairs of Ukraine. The intervention of global powers has polarized Ukrainian politics. Before the Russian invasion of Ukraine, political actors were divided into two conflicting camps. Although the war has consolidated Ukrainian identity and nationalism, Ukraine has lost its territorial integrity.

The Russian intervention in 2014 did not receive a harsh reaction from the West. Accordingly, Western countries did not consolidate their power to deter Russia from invading some parts of the Ukrainian territory, namely the Crimean Peninsula and the Donbass region. In other words, they indirectly encouraged, if not forced, the Russian government to invade Ukraine. It seems to be almost impossible to force Russia to withdraw from Crimea and the Donbass region.

It means that the Ukrainian expectations will never be met, forcing Ukraine to continue its liberation war against Russia. This is exactly what most Western countries want in the Ukrainian crisis: A damaged Ukraine and a weakened Russia. Seeds of strife were sown between Ukraine and Russia and continue to poison the bilateral relations between the two Slavic and Orthodox Christian states. It will take a long time to restore relations between these two nations, which means Ukraine will serve as a buffer state between the West and Russia.

Within this context, Erdoğan’s offer was/is one of the most favorable alternatives for a reasonable solution and a sustainable cease-fire. Turkey has been pushing the two sides toward a realistic solution. However, it is very difficult for Ankara to persuade the warring sides for a sustainable cease-fire. There are two main challenges against the Turkish mediation efforts. First, the West does not want Turkey to reap the fruits of the crisis. Due to the otherization of the Turkish government and Erdoğan, the West will not easily accept Turkish mediation efforts.

Second, I think even if Russia accepts Turkey’s offer, the West will not allow Ukraine to reach a compromise and a cease-fire with Russia. Since Ukraine is heavily dependent on Western military support to continue with the war against the Russian war machine, there is no other choice but to follow the Western perspective.

Third, the relatively “maximalist” positions and discourses of the warring sides will block the way to a sustainable cease-fire. Ukraine, naturally and rightfully, claims that it will not give up any piece of land to any state. However, the Russian government has been trying to expand its invasion of Ukraine. That is, the two sides have been struggling not to ease but deepen the crisis.

Despite the challenges, Turkey and other states that are affected by the war should unite their efforts in finding a sustainable solution to end the Ukrainian war. The continuation of the war will increasingly continue to erode the world economy, especially the rocketing food and energy prices. Otherwise, a prolonged war will reshuffle the regional and global cards in the near future.

Confusion in Turkish opposition grows
Next
Loading...
Loading...
We use cookies to ensure that we give you the best experience on our website. If you continue to use this site we will assume that you are happy with it.Ok