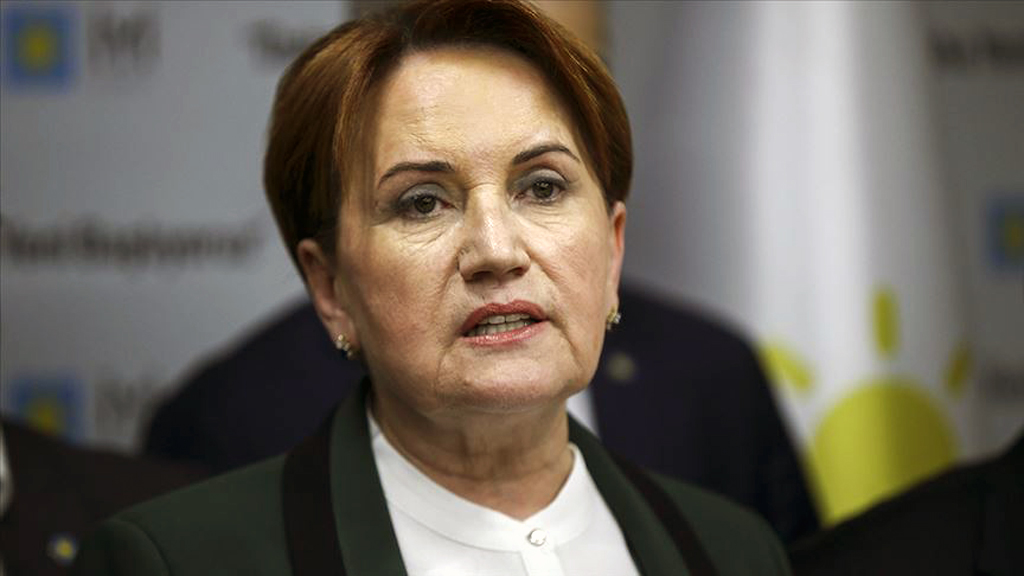 Is a new electoral alliance in the making under Meral Akşener?

Recent remarks by Good Party Chairwoman Meral Akşener about the links between the Peoples’ Democratic Party (HDP) and the PKK terrorist organization has sparked fresh controversy about the future of electoral alliances in Turkish politics. Recalling the HDP’s inability to distance itself from terrorists, she carved herself out some room to maneuver and revived questions about the possibility of a third electoral alliance emerging in the future.

Recent remarks by Good Party Chairwoman Meral Akşener about the links between the Peoples’ Democratic Party (HDP) and the PKK terrorist organization has sparked fresh controversy about the future of electoral alliances in Turkish politics. Recalling the HDP’s inability to distance itself from terrorists, she carved herself out some room to maneuver and revived questions about the possibility of a third electoral alliance emerging in the future.

Let us recall that Temel Karamollaoğlu, who chairs the Felicity Party (SP), has been saying since November 2019 that there could be new alliances in future elections. In light of the most recent controversy, he reiterated that the pro-opposition Nation Alliance was an obligatory partnership and stressed that new alliances could emerge as the next election approaches.

Although opponents of the People’s Alliance will keep looking for potential partnerships, it seems unlikely that concrete steps would be taken without an actual election on the horizon. The Republican People’s Party (CHP) and the HDP have been talking about a “democratic alliance,” yet there is no reason for any opposition party to bear the burden of formally joining that duo, especially the latter, right away.

Over the last week, the PKK attacked a group of social workers delivering supplies to quarantined people in Van, and five HDP-affiliated mayors were detained. As Turkey’s fight against the PKK actively continues in three countries, there is an ongoing spat between Turkish leftists and Kurdish ethno-nationalists within the HDP. Unable to liberate itself from PKK commanders, the party cannot be expected to launch a political initiative to end its marginalization, nor can the CHP leadership, which HDP officials urge to “take up the Kurdish issue,” reasonably take additional steps to legitimize that movement. Indeed, Akşener’s most recent statements drove up the costs of a potential move.

The existing political alliances have rather distinct dynamics and chemistry. The People’s Alliance was formed after the July 15, 2016, coup attempt to protect Turkey from such attacks. It doesn’t limit itself to elections and aims to accomplish the country’s goal of becoming an independent and powerful player under the new world order. The alliance institutionalized the presidential system and adopts a “national-native” position on fundamental issues.

The Nation Alliance, in turn, is a loosely structured partnership that plays a more active role around elections. It unites ideologically incompatible political parties over their mutual opposition to President Recep Tayyip Erdoğan. The only other thing that this alliance’s members have in common is their desire to restore the parliamentary system.

Moving forward, the following questions will have to be answered: In light of Akşener’s latest move, will her party partner up with the Felicity Party, the Future Party (GP) and the Democracy and Progress Party (DEVA) to form a third alliance? Would that move amount to a departure from the loosely structured Nation Alliance? Could those four political parties develop a fresh and different common language? Last but not least, why would the leaders of those three parties accept Akşener as their political overlord?

A third alliance, however it performs, would clearly strengthen the Good Party. It could give Akşener more leverage over a potential joint presidential campaign by the opposition parties, just as she played a crucial role in the 2018 presidential election. For the newly established AK Party offshoots, joining that alliance would amount to an official admission of their limited goals. Those movements are still looking for an original voice to oppose the AK Party, as the Future Party continues to attack the AK Party in an attempt to come to terms with its past. By climbing on the CHP’s “authoritarianism” bandwagon, it merely reproduced existing lines of criticism against Erdoğan. DEVA, in turn, has merely warned against a coming economic crisis and claimed to be uniquely positioned to address that problem. By joining the third alliance today, they could hope to liberate themselves from the criticism of bandwagoning behind the main opposition CHP. Accepting to live under the Good Party’s shadow, however, would effectively mean that they would stomach being reduced to a secondary consideration in Akşener’s plans.

All signs point to the possibility of a third electoral alliance being formed only when there is an actual election to contest, mainly to enter into negotiations with the People’s Alliance and the Nation Alliance.

If we forget COVID-19 outbreak...
Next
Loading...
Loading...
We use cookies to ensure that we give you the best experience on our website. If you continue to use this site we will assume that you are happy with it.Ok