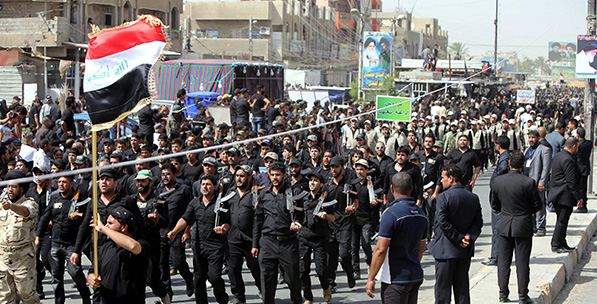 The U.S. identified a new priority: The containment of Iran. Having secured the support of Israel and several Gulf countries, the U.S. president recently unveiled a new, strongly-worded Iran strategy. And he refused to certify the Iran nuclear deal to compel Congress to take action.

During a recent visit to Saudi Arabia, U.S. Secretary of State Rex Tillerson said that Shiite militias in Iraq “must go home,” citing the impending end of the anti-Daesh campaign. It was noteworthy that Mr. Tillerson made the above statement at a meeting of the Saudi-Iraqi Coordination Council in Riyadh. In an effort to stop Iran from exerting total control over the administration of Haider al-Abadi, the United States has been promoting closer cooperation between Saudi Arabia and Iraq. At the same time, Washington tries to find ways to limit Iran’s influence in Iraq, Syria and Lebanon.

By the same token, Washington’s decision to distance itself from Masoud Barzani’s independence referendum was part of an effort to not lose Iraq to Tehran. It is no secret that the threat posed by Iran and its proxies is a top priority for the U.S. Therefore, Secretary Tillerson will probably urge the Shiite militias in Syria to return home as well.

Washington’s policy to contain Iran, for lack of a better word, is complicated. First and foremost, Iranian expansionism was fueled by mistakes made by the U.S. in Iraq and Syria after the Arab Spring – and it continues to feed off the same factors. Most recently, Washington identified a set of goals that it cannot achieve with inadequate tools and misguided policies. Since the late Obama period, Washington has been struggling to develop an effective and coherent policy regarding Syria and Iraq. Over the past few years, this situation has made things quite difficult for Turkey and other U.S. allies in the region. To make matters worse, the Trump administration’s approach to the Middle East has been messier than the previous administration.

In his final years, President Obama signed a nuclear deal with Iran to reintegrate Tehran into the international system and made the fight against Daesh his top priority. Nonetheless, he failed to develop an effective policy. Quite the contrary, the Obama administration enlisted the services of proxies as a ground force to limit Washington’s military expenditure and footprint – which entailed U.S. support for the People’s Protection Units (YPG) forces and a rapid decline in Turkey-U.S. relations. Under the circumstances, Washington deemed it sufficient to conceal the PKK, which it considers a terrorist organization, behind the smoke screen of the Syrian Democratic Forces (SDF). Having failed to fix his predecessor’s mess over the past year, President Trump has been trying to come up with a new Syria/Iraq policy. As the anti-Daesh campaign nears its end, the U.S. thus identified a new priority: The containment of Iran. Having secured the support of Israel and several Gulf countries, the U.S. president recently unveiled a new, strongly-worded Iran strategy. And he refused to certify the Iran nuclear deal to compel Congress to take action.

At this point, Europe seems opposed to President Trump’s efforts to call off the nuclear deal. In light of the most recent developments, officials from the EU, Germany and France promptly announced that they would not stop trading with Tehran. Recalling that the Iran nuclear deal was a multilateral treaty, they warned that U.S. withdrawal could heighten the risk of war in the region.

Unlike Mr. Obama’s policy, President Trump’s new Iran strategy focuses on Shiite extremism among other things and blames Iran’s destructive activities in the Gulf region on the Revolutionary Guards. As such, there is talk of Washington’s plans to introduce additional sanctions against Iran vis-à-vis the Revolutionary Guards and ballistic missile systems. At the same time, President Trump said he had no problem with Germany and France making money by trading with Iran. Tillerson, by contrast, had called on European companies to comply with economic sanctions against Tehran. Although disagreements between President Trump and Secretary Tillerson over policy wouldn’t be unprecedented, this isn’t about policy at all. Instead, the United States is trying to adopt a strategy to contain Iran without revising existing Syria and Iraq policies. Needless to say, the whole thing is a futile endeavor. Sadly enough, Washington believes that it can get rid of the Shiite militias by working with Saudi Arabia, Israel and Gulf countries without addressing the problems it has been experiencing with Turkey over U.S. support for the PKK-YPG militants. The Americans have a saying: “Easier said than done.” That’s a great point indeed.

US's Middle East Policy behind Ankara's Axis shift
Next
Loading...
Loading...
We use cookies to ensure that we give you the best experience on our website. If you continue to use this site we will assume that you are happy with it.Ok