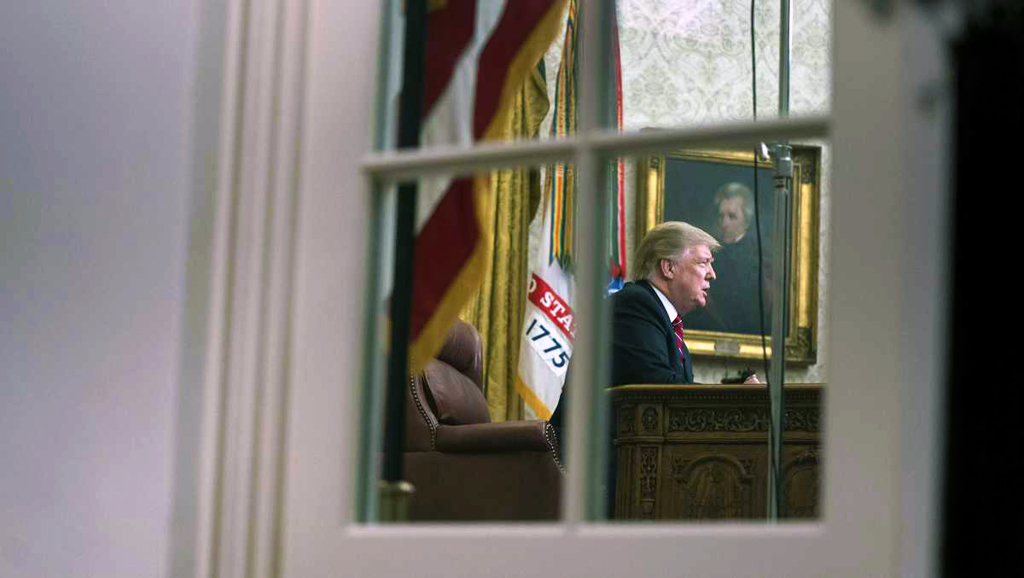 In Trump’s Middle East, Vladimir Putin is the real master of the art of the deal

U.S. President Donald Trump changed his mind about pulling American troops out of Syria – again. The latest reversal of policy reflects the Pentagon's concerns that the U.S. withdrawal will play into the hands of Russia and Iran. The return of U.S. servicemen to Kobani and Qamishli, and the military buildup in eastern Syria suggest that the White House is on board.

U.S. President Donald Trump changed his mind about pulling American troops out of Syria – again. The latest reversal of policy reflects the Pentagon’s concerns that the U.S. withdrawal will play into the hands of Russia and Iran. The return of U.S. servicemen to Kobani and Qamishli, and the military buildup in eastern Syria suggest that the White House is on board.

As always, Trump does not hide why the United States decided to stay: “We are keeping the oil. I’ve always said that – keep the oil. We want to keep the oil, $45 million a month. Keep the oil. We’ve secured the oil.”

People always used to say that the distribution of Middle Eastern oil around the world was the driving force behind Washington’s aggressive policy decisions. They argued that the United States used the oil to exert influence over China and other developing nations, concluding that Washington would never leave the region.

No U.S. president had ever been as straightforward as Trump. Needless to say, not mincing one’s words is not the same as being virtuous. It is merely an embodiment of American audacity.

Still, Trump reveals the naked truth to the world by speaking his mind freely – unlike Barack Obama and the rest of his predecessors. He does not make an effort to legitimize American interests by paying lip service to “values.”

Even Bashar Assad, who killed hundreds of thousands of innocent people, is aware of what’s happening. In a recent interview with NBC, the Syrian president claimed that Trump was the best U.S. president ever; not due to the merits of his administration’s policy but because he is completely transparent. When Trump wants Syria’s oil, Assad said, he asks for it openly: “What would anyone want but a transparent enemy?”

Turkey’s preoccupation, however, is the prospect of Trump inviting Ferhat Abdi Şahin, the ringleader of the terrorist organization PKK’s Syrian component, to Washington and allowing the group to finance its operations by selling Syria’s oil. Indeed, Washington keeps making mistakes. Having delivered thousands of truckloads of weapons to the PKK in Syria, the United States now considers using oil to sponsor the organization. It seems that U.S. Central Command (CENTCOM) desperately wants to keep its proxy, in which it invested several billion dollars.

Turkey’s military incursion in northern Syria, dubbed Operation Peace Spring, dealt a heavy blow to the People’s Protection Units (YPG), the PKK’s Syrian branch. The group’s ongoing effort to continue its operations as a “political entity” will fail sooner or later, and Ferhat Abdi Şahin will go down in history as the leader of PKK’s Syrian offshoot – no matter how many times his handlers rebrand him. Turkey will keep hunting him and do everything in its powers to obliterate the YPG. Meanwhile, PKK militants in Syria will take turns cozying up to the United States, Russia and the Assad regime, as Washington keeps protecting the YPG in Syria’s oil-rich areas.

To be clear, neither oil revenue nor the West’s extraordinary propaganda mill will be enough to legitimize the YPG. Nor can they protect the group on the ground.

Ignore the West’s empty words about the supposed betrayal of the Kurds. Europeans stopped worrying about another refugee wave when the local population of Ras al-Ayn and Tal Abyad returned to their homes once Turkey and its local partners secured the area. Europe doesn’t care about the PKK’s fate so long as Syrian refugees stay where they are.

Once Turkey begins to resettle refugees to the safe zone in northern Syria, European governments will fall in line. The world used to assume that the YPG-controlled parts of northern Syria enjoyed some level of stability and therefore blamed Turkey for disturbing the peace. Turks will show the international community what real stability looks like by facilitating the permanent return of Syrian refugees to their homes.

Meanwhile, the Arab world never buy into the narrative of the YPG’s betrayal. Arab leaders, who criticized the Turkish incursion, are trying to cope with the uncertainty surrounding Washington’s Middle East policy. They keep inching toward a settlement with Iran, with Russia as mediator.

Although Trump considers himself a master of the art of the deal, Russian President Vladimir Putin looks like the real deal.