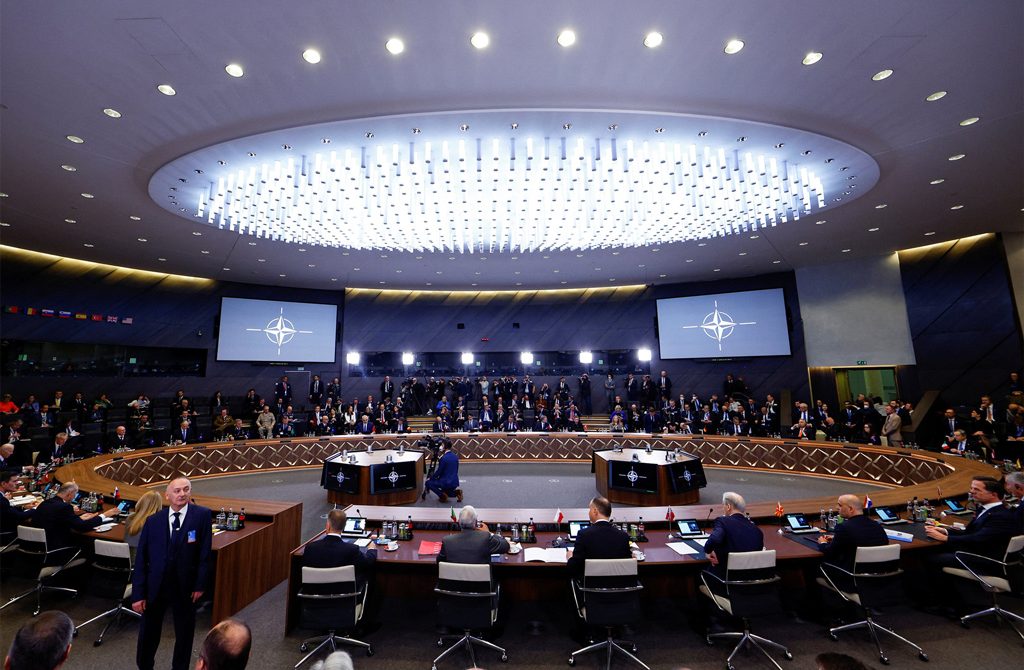 A general view at the start of a round table meeting during a NATO summit to discuss Russia's invasion of Ukraine, at the alliance's headquarters in Brussels, Belgium, March 24, 2022. (Reuters Photo)

In the aftermath of NATO’s extraordinary gathering

Almost one month into the Russian occupation of Ukraine, I joined President Recep Tayyip Erdoğan on his trip to Brussels, where he attended NATO’s emergency summit. The leaders of 30 allied nations gathered there to discuss the future of Russia and Eastern Europe in line with the Ukraine crisis. Erdoğan, who made his mark on the latest crisis with leader-to-leader diplomacy and his balanced policy, also held tete-a-tete meetings with the leaders of France, Italy, Estonia, Spain and the United Kingdom at the NATO headquarters.

The decision to extend NATO Secretary-General Jens Stoltenberg’s term by another year was undoubtedly informed amid the ongoing crisis with Russia. Meanwhile, the joint statement referred to the Russian aggression as “the gravest threat to Euro-Atlantic security in decades.” In addition to reiterating their commitment to providing further political and practical support to Ukraine, that statement not only condemned Russia’s aggression but also identified the various steps that Moscow is expected to take. In this sense, the joint statement touched upon ending the occupation, humanitarian aid and corridors, ensuring the safety of nuclear reactors and the possibility of Russia’s use of biological and chemical weapons. The allies, which endorsed sanctions against Russia and Belarus, highlighted the Open Door Policy and recognized each nation’s right to choose its own security arrangements. Last but not least, NATO decided to establish four additional multinational battlegroups in Bulgaria, Hungary, Romania and Slovakia.

Judging by that statement, all members countries are set to increase their defense spending. Obviously, the NATO allies are trying to provide the maximum amount of military support to Ukraine without getting dragged into a war with Russia. Unhappy with the alliance’s indirect support, Moscow brings up the possibility of using nuclear weapons at regular intervals. NATO’s attempt to contain the war in Europe within Ukraine could still fail if Russia chooses to meddle with the delivery of military aid through Poland.

At a time when the NATO allies must stand in solidarity with each other to ensure the safety of the Eastern European states, some member countries, starting with the United States, need to straighten their attitude toward Turkey. Ankara’s message is quite obvious: The first step in promoting solidarity among the allies is for the allies to stop imposing sanctions on each other. The U.S. and the EU – which abandoned Turkey in its fight against the PKK terrorist group and the Gülenist Terror Group (FETÖ) – need to revise their policy.

The uncertainty, which Russia creates in the international system as a great power, and its potential repercussions require the Western alliance to make a fresh strategic assessment. As such, the European leaders, who have met with Erdoğan in recent days, made positive statements with regard to repairing their relations with Turkey. Judging by the public statements of German Chancellor Olaf Scholz and Dutch Prime Minister Mark Rutte, in particular, it appears that the EU has already started to warm up to Turkey by abandoning its cold shoulder policy and sanctioning Turkey’s defense industry.

To revive the Turkey-EU relationship, Erdoğan called on the bloc to jumpstart the membership talks and engage in negotiations for the Customs Union’s modernizations without further delay. Despite the Russian threat, however, it seems that a strategic transformation of the European perspective about Turkey remains a challenge.

The latest case in point was the EU’s Strategic Compass, which many describe as its new security doctrine. The document, which discusses bilateral interests, does not treat Turkey as a candidate country. At most, it portrays the nation as a neighbor, which is located in a region with no shortage of threats. To make matters worse, the Strategic Compass identifies Turkey as the one causing a security issue in the Eastern Mediterranean – as per the narrowly defined interests of Greece and the Greek Cypriots. Despite having been updated following the Ukraine crisis, the fact that the document does not place Turkey (as opposed to the U.K.) within the context of “a broad and ambitious security and defense engagement” speaks volumes about Europe’s strategic blindness.

Notwithstanding, the Russian threat should be expected to consolidate the growing sense of solidarity among the NATO allies in the long run and force Europe to change its perspective with time. The bottom line is that the EU, which now faces Russia, won’t be able to develop a new security mechanism without creating a comprehensive security framework together with the U.K. and Turkey.

Experts Respond: All Eyes on NATO, 6 Takeaways from the Emergency Summit
Previous

How to manage transformation in Turkey-West relations
Next
Loading...
Loading...
We use cookies to ensure that we give you the best experience on our website. If you continue to use this site we will assume that you are happy with it.Ok