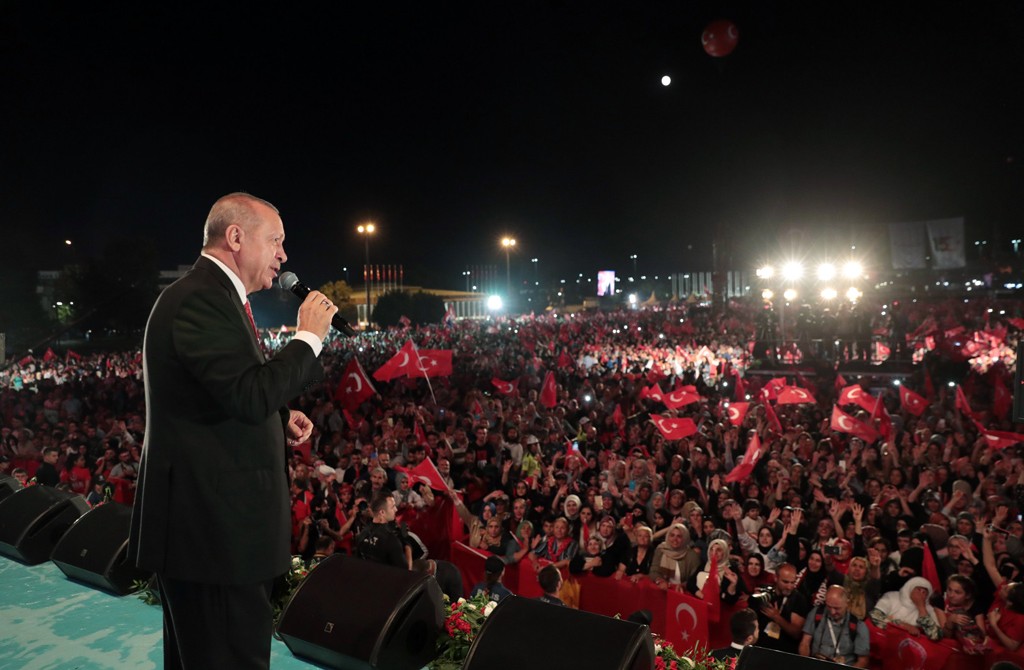 The Gülenist Terror Group's (FETÖ) July 15 coup attempt in 2016 was one of the darkest moments in Turkish political history. It was a traumatic event for the Turkish bureaucracy and military.

The Gülenist Terror Group’s (FETÖ) July 15 coup attempt in 2016 was one of the darkest moments in Turkish political history. It was a traumatic event for the Turkish bureaucracy and military.

The Turkish people and actors of the state mechanism were shocked by such a heinous attack. Turkey’s bureaucracy, military and government underwent a structural transformation after the coup attempt. It will, however, take longer for the Turkish institutions to get completely rid of FETÖ elements.

This new alliance also affected Turkey’s foreign policy preferences and security policies. There was already deep skepticism and mistrust for NATO and the European Union’s handling of Turkey’s critical foreign policy and security issues before the coup. In the areas of counterterrorism, handling of the Syria and Iraq issues and the development of broader cooperation beyond transatlantic relations, those institutions were dysfunctional for Turkish interests.

Turkey’s NATO allies have implicitly and explicitly sponsored YPG/PKK activities. Members of terrorist groups like the PKK, the Revolutionary People’s Liberation Party/Front (DHKP-C) and FETÖ act comfortably in many European cities, where they threaten Turkish citizens.

Turkey’s existing skepticism only grew deeper after the coup attempt. Neither the European delegations nor the NATO staff demonstrated any sympathy and support for the Turkish government, which was startled by a disparaging coup attempt. The EU and European politicians were much more supportive of putschists like Egypt’s Abdel Fattah el-Sissi.

Many European political actors and journalists even accused President Recep Tayyip Erdoğan of using the coup to silence his political opponents. Only a few countries demonstrated support for Turkey after the coup attempt and Turkey strengthened its ties with those countries. Russia was one of them. Qatar, Pakistan, Azerbaijan and some Balkan countries also backed Turkey’s elected government.

The traumatic experience of the coup attempt and the muted response from international actors forced Turkey to reshape its foreign and security policies. The AK Party and MHP alliance prioritized reducing Turkey’s dependency on the U.S. and European actors. They instead tried to diversify Turkey’s foreign policy and security cooperation.

For decades, Turkey’s conventional counterparts in its security alliances did not help Turkey in developing military technology. They even prevented the sale of key military equipment, such as high-altitude air defense systems, key engine parts and surveillance technologies. The equipment was critical in Turkey’s struggle against terrorist groups and its strategic interests in the region.

Turkey’s initial responses were in the direction of launching cross-border counterterrorism operations against Daesh and the YPG/PKK in Syria, without consulting its NATO allies. The success of Operation Euphrates Shield – just two months after the coup attempt – restored the deterrence of the Turkish Armed Forces (TSK), both domestically and internationally.

Reducing dependency in strategic areas, being more proactive and preventive in counterterrorism policy and engaging in a more flexible, issue-based alliance with various actors in areas of its interests were the new priorities of Turkey’s foreign policy and security in the post-coup era.

Another priority was reducing dependency on the other international actors in the areas of defense technology and energy. Being dependent on NATO in terms of air forces, air defense systems and on some strategic weapons made Turkey more vulnerable to external intervention and manipulations.

The AK Party government had already made reducing Turkey’s dependency on defense technology one of its key policy agenda. The coup attempt only accelerated the efforts to make Turkey less dependent on foreign military equipment.

NATO and the U.S. were reluctant to provide some strategic weapons to Turkey, to maintain the country’s dependency on NATO.

In the area of military technology, Turkey cooperated with Russia in buying the S-400 missile defense system. There are also some joint projects with other actors.

Turkey also tried to reduce its dependency in the energy sector. Being dependent on imported energy, especially oil and natural gas, made the Turkish economy and industry susceptible to external shocks. Oil and Natural gas exploration efforts in the Eastern Mediterranean and the Black Sea region were part of Turkey’s efforts to reduce Turkey’s energy dependency. Turkey increased its energy cooperation with Azerbaijan and Qatar.

By taking a more pragmatic approach, Turkish officials managed to cooperate with different actors without aligning with them. However, it is much difficult to maintain Turkey’s fragile and complicated diplomatic relations within the uncertain context of the post-COVID-19 world.

Trying to diversify its relations and reduce its unilateral dependency on particular actors in strategic issues has increased Turkey’s immunity to additional political and military shocks. It is still important for Turkey to make its foreign policy and security more predictable by gradually strengthening its coordination and cooperation on some issues.

A minimal level of empathy and support from Turkey’s international counterparts is also expected before a change occurs in the way the Turkish authorities deal with their NATO and EU counterparts.

Jaws, COVID-19 and American tragedy
Next
Loading...
Loading...
We use cookies to ensure that we give you the best experience on our website. If you continue to use this site we will assume that you are happy with it.Ok