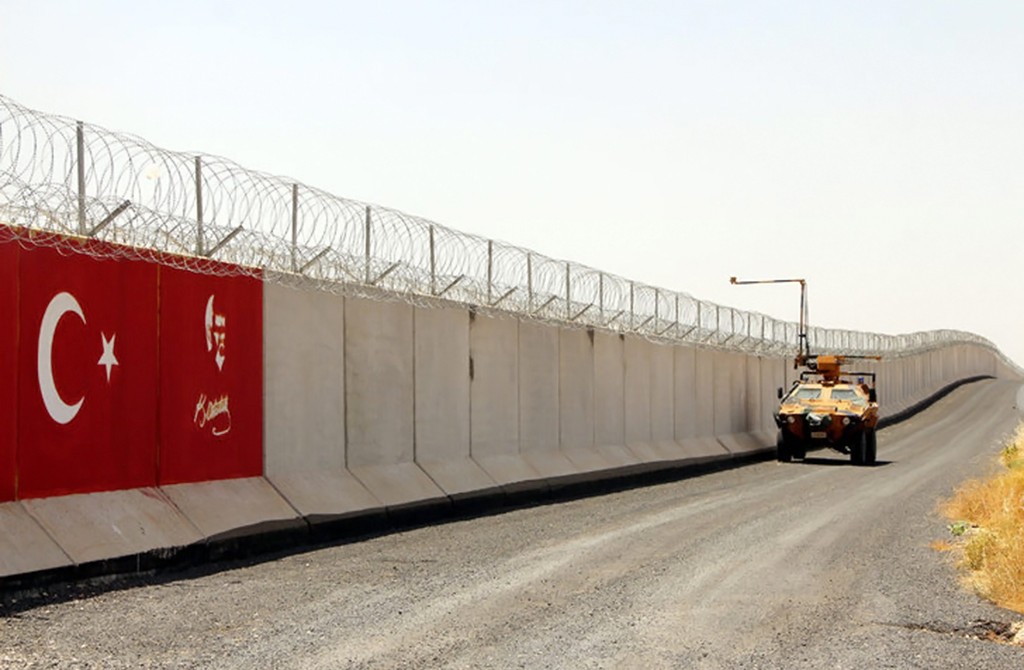 A Turkish military vehicle passes by a perimeter wall on Turkey's southern border with Syria's Idlib, as worries about a possible offensive against the Syrian province and its consequences are discussed by world and regional powers, Aug. 30.

Idlib will not be Syria’s endgame

Syrian regime forces are preparing to launch a major military operation against opposition-led groups in the Idlib province of northern Syria.

Syrian regime forces are preparing to launch a major military operation against opposition-led groups in the Idlib province of northern Syria. Russia and Iran are helping the regime forces in its military buildup around Idlib. Russia has already sent scores of naval vessels to the Eastern Mediterranean to prevent an international intervention against the Syrian regime.

Russian and Iranian military advisers are helping regime forces that are besieging the city. U.N. Syria envoy Staffan de Mistura said a potential “perfect storm” is looming over Syria’s Idlib province, with possible military implications beyond the region. The U.N. and many countries in the region and the EU are concerned about a humanitarian catastrophe in Idlib. Armed confrontation between Syria and Iran and anti-regime international actors including the U.S., the U.K. and France is also a possibility. Those actors may want to show off their forces against Russia and Iran in the context of Idlib. Turkey is among the actors that will be most affected by a regime intervention in Idlib. How the Idlib confrontation will be handled will change Turkey’s position vis-a-vis Russia and Iran and Turkey’s willingness to collaborate with these two countries.

Idlib is the last major stronghold the oppostion groups, and those groups may mobilize all their resources and capabilities for survival against the regime-led forces. Idlib was declared as a de-escalation zone according to the Astana talks. A dominant opposition group, the Hayat Tahrir al-Sham (HTS), which is linked to the al-Qaida group is the primary target in Idlib. However, many other opposition groups and more than 3 million civilians live in Idlib. Many were those who fled former opposition strongholds and moved to Idlib from other parts of Syria especially after the evacuation of Aleppo. It is challenging to distinguish millions of civilians from around 10,000 militants linked to the HTS group.

There are also much smaller but more extremist armed groups within Idlib who have different agendas. All of the different actors are concerned about the provocative moves of these radical groups. Both the regime and the opposition groups in Idlib have warned the international community about the possible use of chemical weapons by the other side in case of confrontation. The use of chemical weapons from either side may lead to a humanitarian catastrophe and can escalate a conflict between Russia, Iran and the U.S.Turkey is extremely concerned about a humanitarian catastrophe in Idlib that may lead to the flow of millions of refugees to its border. Hosting millions of refugees has already cost Turkey a lot, and such a move may have the potential to create social and political unrest in Turkey, which is already experiencing economic instability due to currency fluctuations and foreign currency rates against the Turkish lira.

The Idlib crisis will not be the endgame in the prolonged civil war in Syria. The confrontations between the regime and the opposition forces, as well as the competition for influence over Syria between international actors may continue for more than a decade. Regime forces may declare their victory against the armed opposition if they manage to take control of Idlib after an operation if everything goes to plan. Such military action may lead to civilian casualties and destroy the infrastructure of the city. The stability and safety of Idlib are also crucial for the return of millions of refugees and internally displaced persons (IDPs) to Syria.

Turkey will continue to play a significant role in the future stability of Syria even after the parties manage to reach a peace deal. For Turkey, what is concerning is how its counterparts Russia and Iran handle the crisis, such as the current Idlib confrontation. If these actors take Turkey’s primary security concerns and long-term interests in Syria into account and work closely with Turkey when they are dealing with the Idlib issue, Turkey may play a much more constructive and cooperative role for the future of Syria. However, if they try to exploit the situation and outmaneuver Turkey by allowing regime forces threaten Turkey’s national security concerns, this may damage the possibility of future collaboration of the Astana trio. For Turkey, Idlib will be a test for its partnership with Russia and Iran. The tightrope in Idlib will be necessary for determining the direction it will take for Syria’s unpredictable endgame.

The United States in trouble with its alliance network
Previous

Report: The political economy of the transformation of Islamic finance in Turkey
Next
Loading...
Loading...
We use cookies to ensure that we give you the best experience on our website. If you continue to use this site we will assume that you are happy with it.Ok