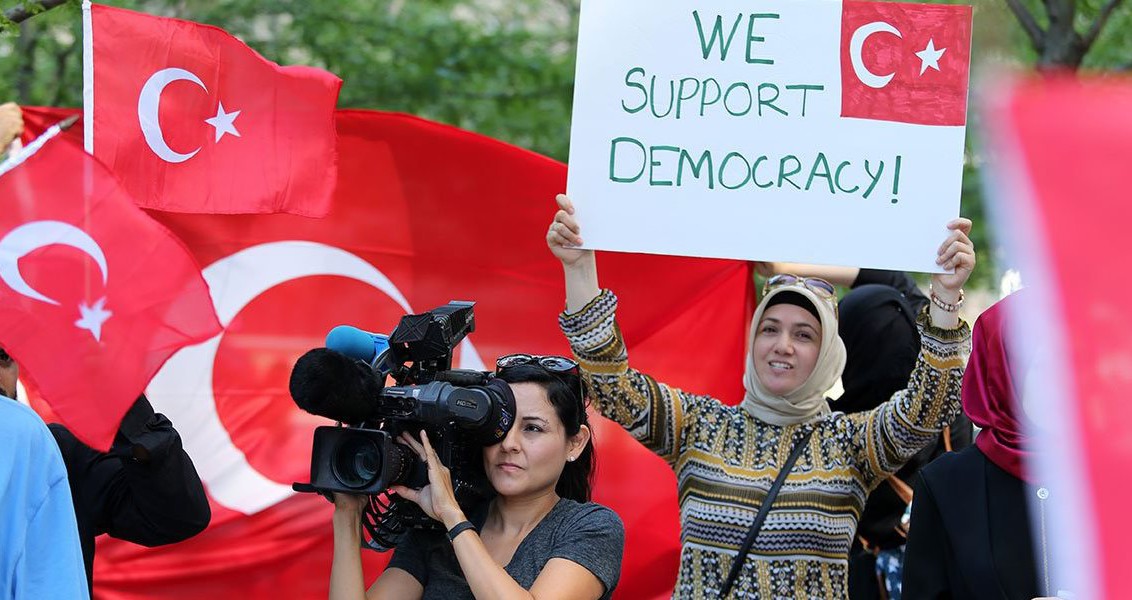 How to Prevent another Coup In Turkey

It is almost impossible to defeat the Fethullahçı organisation by just focusing on its institutional infrastructure. It is also absolutely necessary to defeat the movements messianic ideology and belief system.

The night of 15 July was probably one of the longest in Turkey’s political history. A junta within the Turkish military organised by the Fethullahçı terrorist organisation (FETO) wanted to take control of the government and planned to assassinate President Recep Tayyip Erdoğan and Prime Minister Binali Yıldırım. Fighter jets controlled by the putschists bombed the parliament building while armoured vehicles and soldiers shot at Turkish citizens who opposed their coup.

It was a long and a bloody night; more than 240 Turkish civilians were killed, with another 1,500 wounded. President Erdoğan’s leadership, the Turkish people’s solidarity and brave resistance all over the country as well as the police forces’ fight against the putschists and the media’s rapid response against the coup all played important roles in the common victory against the plotters.

While the threat of a coup appears to have abated for the time being, two important questions still come to mind: How did we end up with such a bloody coup in 2016? How can we prevent another coup? The answers are interconnected. The following reflections may help to defeat the next coup against the elected government in Turkey and elsewhere.

Don’t trust your “friends” and “allies” in the West; all they want is a loyal and harmonious partner, not necessarily a democratic one. Whether the government in Turkey is democratically-elected or not is neither here nor there as long as it works in tandem with Western economic and political interests. The political will and the prosperity of the Turkish people are at the bottom of the West’s concerns with regard to Turkey. It is even more efficient and effective for these “friends” to negotiate with a weak government or a dictator rather than a strong, democratically-elected leadership. They will try to tarnish the image of a strong leader like Erdoğan who wants to bargain on behalf of his own people’s interests. The allegations by powerful media and institutions may succeed in tarnishing the image of the leader if he or she is tough in the negotiating room.

If media slanders are not enough, then the pro forma reports of the “Human Rights NGOs” are always available as an optional extra to put more pressure on Turkey or discredit its leader. Western public opinion doesn’t much like dictators, autocrats or Islamists, so such buzzwords are hard to counter. It is even more difficult to defeat the image that is created by the Western media than defeating your enemies in an open fight. Get ready to challenge these allegations if you really resist the aspirations of Western leaders, and don’t forget to make more friends beyond Europe and North America in case the West insists on sympathising with the putschists.

Turkey experienced hybrid forms of a coup before last month’s failed takeover attempt. Efforts to arrest the chief of the National Intelligence Agency (MIT) in February, 2012, for example; the corruption allegations against the ruling AK Party ministers and Erdoğan’s family in December, 2013; the Gezi Protest of June 2013; and the termination of the Kurdish Peace Process last summer were hybrid efforts to topple the elected government in Turkey.

Erdoğan and his party were more resilient than the planners of those plots expected. Only after the economic, bureaucratic, judicial and electoral efforts to topple the government failed did the more conventional military coup swing into action. The latter was a desperate act by Fethullahçı and its leader Fethullah Gülen; such means are not always the best option, especially in parliamentary democracies. Making the government more resilient to shocks like this and preparing the people to resist hybrid coup efforts is important. Democratic elections, peace processes, efforts to reduce social and political tensions and strong economic growth make the country more resistant to coups of all kinds. Despite their political differences, almost all segments of Turkish society gave consistent responses to the coup. Maintaining the trust of democratic institutions is crucial for such a collective response against putschists.

Social and political polarisation is risky at all times, but more so in times of crisis. Ethnic, sectarian and ideological tensions may bolster the appetites of the enemies of the Turkish people in their efforts to destabilise society. The spillover from the Syrian Civil War, the failure of the Kurdish Peace Process and more attacks by Daesh in Turkish cities have increased social tensions and damaged the people’s sense of security. Erdoğan’s strong leadership and public support have helped to manage those tensions, but the next leader in Turkey may be unprepared to manage such crises. Increasing social capital and trust within society in times of polarisation and tension is thus crucial. The coup plotters may hesitate more when there are fewer conflicts and political tensions within society.

Equality of opportunity and providing the basic conditions for upward mobility to everyone in society is extremely important to limit recruitment to clandestine organisations like Fethullahçı. I know that that many loyalists join the organisation in their quest for a better education, a position within the bureaucracy, faster promotion and its networking possibilities. Indeed, its network provides many opportunities to members and loyalists and, like other secretive bodies and elites, it seeks to exploit the Turkish people’s desire to better themselves and their families. Providing free and fair public education opportunities and a meritocratic employment system is crucial for the prevention of networks which can exploit inherent weaknesses in society. Special mechanisms and institutions need to regulate the distribution of senior ranks in the civilian and military bureaucracy.

Effective public scrutiny and regulation of the state institutions is extremely important for maintaining their efficiency and professionalism. There were obvious early warning failures in intelligence in the run-up to the July coup. An effective military reaction to the junta soldiers was also missing on the night of 15 July. The expected professional standards were not met, pointing to the need for the decision-making processes, human resource management and performance processes of these institutions to be regulated, not just in terms of outcomes. Whether these institutions are serving the public interest and maintain their professionalism during crises has to be reviewed and monitored. This is especially so in the security sector, intelligence community and judiciary, where there is no effective oversight and regulation to increase efficiency and maintain professional standards. Such regulatory bodies should increase effectiveness across those institutions; the security sector should not be exempt from professional supervision.

It is almost impossible to defeat the Fethullahçı organisation by just focusing on its institutional infrastructure. It is also absolutely necessary to defeat the movement’s messianic ideology and belief system. Its material aspects and international aid are secondary to the leadership and its teachings. Because of the group’s messianic and apocalyptic views it may not consider the current purge of the state bureaucracy as an ultimate defeat. Its leaders and members will, rather, continue to believe that when the time is right they will rise again and take control of Turkey and probably the entire world. Fethullahçı loyalists believe that they are on the right side of history and those of who try to contain them are destined to fail. It is very difficult to convince them otherwise. Using Islamic texts and some other sources, Fethullah Gülen formulates a messianic narrative, which is hard to counter and defeat. Turkey’s Directorate of Religious Affairs, the Diyanet, and religious scholars, as well as social scientists, need to deal with Fethullahçı’s ideational and religious sources.

The factors mentioned above may not necessarily rule out the threat of another military coup in Turkey completely. They are, though, likely to reduce such a risk to a large extent, and ensure that such attempts to usurp democracy are unsuccessful.

A Call for Sobriety to Europe
Previous

West's Post-Modern War on Turkey
Next
Loading...
Loading...
We use cookies to ensure that we give you the best experience on our website. If you continue to use this site we will assume that you are happy with it.Ok