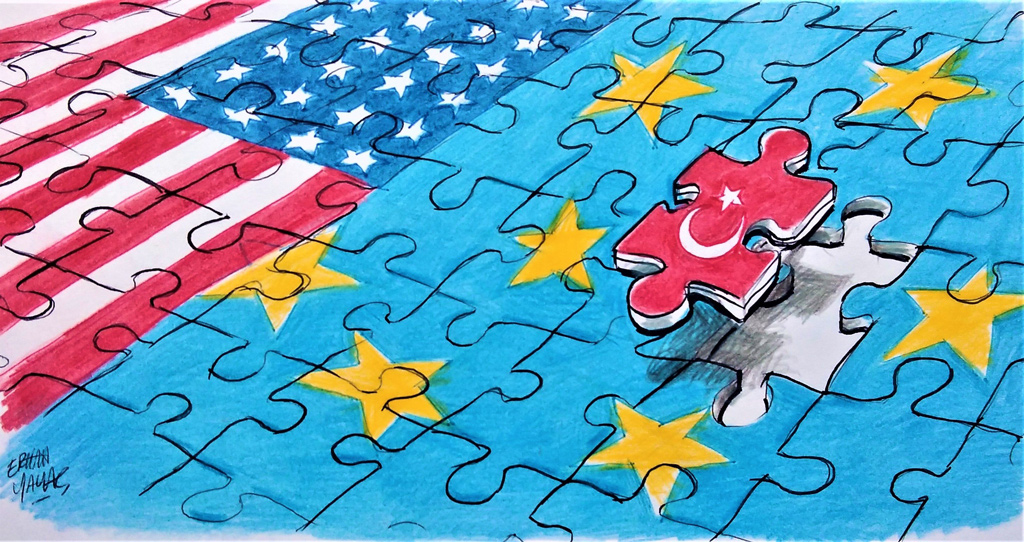 How to manage transformation in Turkey-West relations

President Recep Tayyip Erdoğan’s original policy on Ukraine has made Turkey quite popular in the West. One can reach that conclusion by looking at last week’s NATO summit and the long list of Western leaders who recently visited Ankara. Likewise, one could also take a quick look at the stories and comments circulating in Western media.

German Chancellor Olaf Scholz and Dutch Prime Minister Mark Rutte both made positive remarks during their respective visits to the Turkish capital. That trend continued with French President Emmanuel Macron and Italian Prime Minister Mario Draghi’s warm treatment of Erdoğan in Brussels. It goes without saying that Turkey’s relationship with the West is undergoing a strategic transformation. The key questions now are what expectations that warmth entails and what concrete results it will yield. Another important issue is how that process of strategic transformation will be managed as it depends on the outcome of the Russian invasion of Ukraine.

Certain areas already show promise of progress. Primarily, there is an inclination to lift restrictions on Turkey’s defense industry. At the same time, the Eurosam talks between France, Italy and Turkey could possibly continue and there is growing interest in Turkey (and the Eastern Mediterranean) in regards to supplying Europe’s natural gas.

Meanwhile, the complete rapprochement between Macron, who is up for reelection next month, and Erdoğan signals that Turkey could turn over a new leaf in its relations with France.

U.S. President Joe Biden’s administration, in turn, supports the sale of F-16 fighter jets to Turkey (and their modernization) and seems inclined to make an effort to persuade the U.S. Congress. Still, the slow pace of normalization between Ankara and Washington is largely due to the latter’s lack of focus. Repairing the relationship with Turkey is an increasingly popular idea among Democrats and Republicans alike. Occasionally, those thought exercises evolve into radical proposals that completely disregard Turkey’s own realities. The most recent case in point was the “proposal” that Ankara, which remains sanctioned by its allies, send its Russian S-400 air defense system to Ukraine. On the flight back from Brussels, Erdoğan told a group of journalists, including myself, that the S-400 was Turkey’s property and that such suggestions only “stir up trouble.” Let me add that the Turkish president placed heavy emphasis on the importance of NATO allies not sanctioning each other.

It would be unrealistic to expect Turkey to adopt the same approach toward Russia (including sanctions) as the United States and the European Union. Erdoğan already ruled out the possibility of Turkey casting aside its relationship with Russia, citing natural gas and the Akkuyu nuclear power plant as concrete reasons. From energy and trade to national security, Turkey’s unique circumstances must be respected. As such, Turkey should be seen as a NATO ally that can engage in negotiations and, in some areas, continue cooperating with Russia. Indeed, Turkey, which offered Russia an “honorable exit” from Ukraine, ought to be kept as a reliable partner that contributes to that solution.

It was noteworthy that the NATO allies called on China not to provide economic or military support to the Russian invasion in a joint statement on Thursday.

Judging by the current state of the Russia-Ukraine crisis, the United States and the European Union seem determined to contain Russia and weaken Russian President Vladimir Putin.

As such, the Western governments continue providing military assistance to Ukraine in order to stop the Russian invasion from moving forward. Yet that assistance is offered in a way that prevents a direct confrontation between NATO and Russia. For example, the West has refrained from enforcing a no-fly zone over Ukraine whilst sending all kinds of military equipment to the Ukrainians that could undermine the Russian forces on the ground.

It appears that their objective is to teach Putin a lesson in Ukraine and to ensure that he cannot launch similar attacks in the future.

That requires Europe to end its dependence on Russian energy and calls for the decisive implementation of a long-term policy that will maintain a certain balance in Russia’s relations with global powers like China. For that purpose, the West opts to respond in a way that does not cross the line that would risk direct confrontation with Russia.

It remains unclear whether or when Putin will use certain weapons – including chemical, biological and tactical nuclear weapons – out of desperation. Any response by the U.S. and the EU, in turn, would mean a new world war. If the U.S. and the EU adopt a new long-term policy on Russia, their expectations from Turkey must be in line with Ankara’s priorities and differences. Cooperation and rapprochement must not be symbolic or limited to public statements.

In this sense, the West cannot adopt an approach that exclusively focuses on its narrowly defined interests, as it did regarding the Syrian civil war and the fight against Daesh.

Instead, the West’s approach has to adapt to the current realities of Turkey, which plays an active role in dealing with problems stemming from the world’s current state of disorder.

Turkey has combined its balanced approach to the Ukraine crisis with its existing policy of normalization with the U.S., EU, Gulf, Greece and Israel, and is eager to contribute to the strategic transformation in its relations with the West.

However, for that to happen “the strategic compass” must function properly.

Finally, let me note that Macron’s comments on the Ukraine war creating a strategic opening with Turkey regarding the situation in Libya, the Near East and the Middle East within the context of NATO should be welcomed.

In the aftermath of NATO's extraordinary gathering
Previous

Experts Respond: President Erdoğan’s Visit to Uzbekistan, Bilateral Relations and Regional Impact
Next
Loading...
Loading...
We use cookies to ensure that we give you the best experience on our website. If you continue to use this site we will assume that you are happy with it.Ok