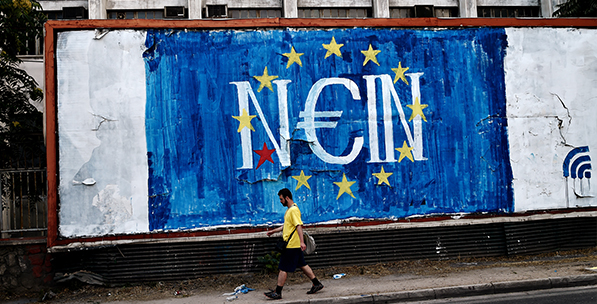 Grexit and the Future of Austerity

The austerity program imposed on Greece as a solution to its deep economic crisis has transformed into a threat to the entire eurozone.

The recent financial calamity that struck Greece and raised serious concerns about its future in the eurozone and the sustainability of the broader project for an integrated Europe triggered parallel theoretical and policy-oriented discussions fed by analyses from a variety of angles. Particular interpretations of the crisis in Greece, its underlying dynamics and potential outcomes, unveiled the premises of different politico-economic standings and ideological positions regarding the relative shares of irresponsible politicians, aggressive international lending practices, double-standards of international institutions such as the International Monetary Fund (IMF) and the EU and the weaknesses of an unproductive national economic system.

Greece became a real laboratory of austerity and different actors proposed different diagnoses. For left-leaning economists, Greece’s predicament was clearly a result of aggressive lending policies pursued by European and international banks under the watchful eyes of the EU and the IMF that triggered an unsustainable accumulation of debt. The orthodox austerity package was designed to guarantee the safe return of the credit received, particularly from the German and French banks, as a strategic priority, rather than injecting funds into the economy and disadvantaged groups to speed up recovery. For neoliberal and conservative European politicians, the EU and the IMF, irresponsible, corrupt, opportunistic and short-sighted Greek politicians have abused the generosity of creditors as well as the financial clout provided by the eurozone to sustain the artificially created welfare regime as long as possible by manipulating their financial figures and resisting to dismantle clientele networks. For eurosceptics in and outside of Europe, the entrance of Greece into the euro system was a completely political and unjustified decision starting from the mathematical acrobatics of Goldman Sachs aimed at reflecting a better-than-real fiscal portrait. They believed that the romanticized image of Greece as the “cradle of European civilization” provided Greek governments unfair an advantage in their dealings with the EU compared to other countries with better economic fundamentals, i.e., Turkey, and whatever happens on the ground, the “strategic intelligence of Europe” will find a way to keep Greece inside the eurozone and the EU.

Whatever position one adopts on the issue, the fact that Syriza was democratically elected as a left-wing, anti-austerity coalition in a country in the EU and eurozone and managed to receive 61 percent of the vote, the “no” votes in the recent referendum created novel regional and global dynamics regarding the relationship between austerity programs and democratic legitimacy. Austerity programs conventionally managed by the IMF and World Bank or IMF and EU double anchors include strict conditionality criteria that are applied regardless of the vagaries of domestic political tribulations, and currency devaluation is used as one of the standard policy tools. In Greece, there is a unique case in which strong democratic legitimacy is smartly used by Prime Minister Alexis Tsipras to create public pressure against the leadership in Germany and France as well as the bureaucratic institutions of the EU in view of the rise of similar political movements such as Podemos in Spain, while a de facto devaluation will substantiate the much-feared Grexit scenario. The Greek government submitted its highly anticipated new three-year plan for the country’s economic overhaul to the bailout authorities, but we will see this weekend whether the package will be perceived as a “credible reform proposal” to use the terminology Guy Verhofstadt used in his theatrical speech at European Parliament.

At a time when even the IMF and the U.S. administration seem more tolerant than the German Chancellor Angela Merkel or Minister of Finance Wolfgang Schauble toward debt relief or restructuring to rescue strategically importan

What to Expect From Turkey's Coalition Government
Previous