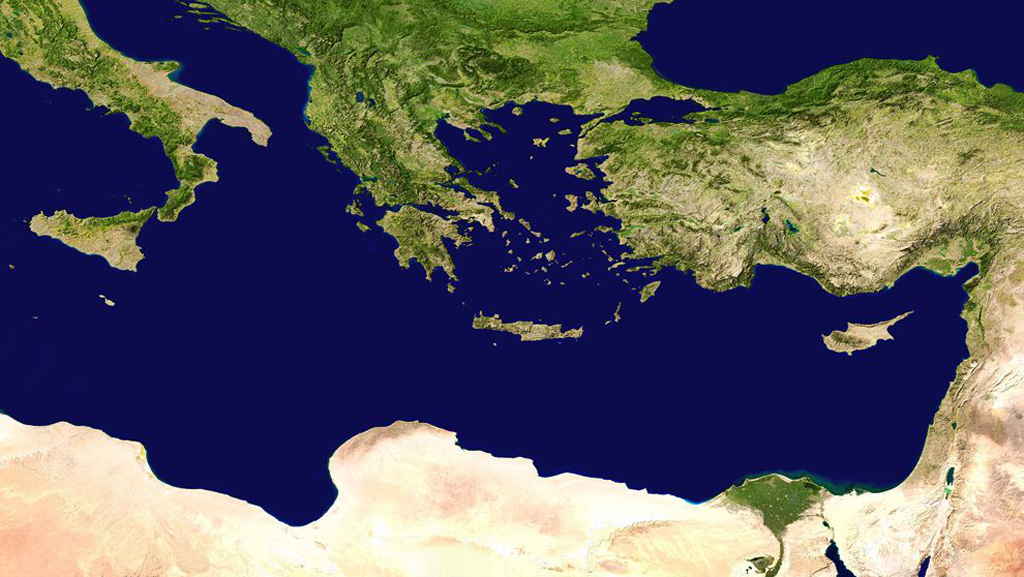 The Greek Cypriot Administration of Southern Cyprus (GCA) is concerned about recent steps taken by Turkey and Egypt toward normalization in the Eastern Mediterranean, which has been a source of deep disagreements on the international and Turkish foreign policy agendas in recent years. Indeed, the GCA had been working with Greece, its political protector, for some time, in an attempt to isolate and neutralize Turkey in the Eastern Mediterranean, taking advantage of Ankara’s strained ties with Athens, Cairo, and Tel Aviv. However, the GCA’s disproportionately ambitious policies toward the Eastern Mediterranean, despite its small surface area, now appear to have hit a dead end with the announcement that Ankara and Cairo have initiated diplomatic negotiations.

Why does the GCA pursue anti-Turkey strategies?

Before we get into the GCA’s Eastern Mediterranean policies, let’s take a look at why it has been pursuing anti-Turkey policies with Greece for so long. The main explanation for the GCA’s anti-Turkey policies in the Eastern Mediterranean is the Cyprus issue. In 1974, Turkey had to carry out an intervention, using its powers as a guarantor over the region, in order to prevent the planned genocide of Turks in Cyprus by Greek Cypriots. Cyprus has since been divided between Turks and Greeks geographically on a northern-southern axis. Despite being the main culprit behind the division, Greek Cypriots continue to disregard the island’s division and blame the Turkish side for all negative developments, insisting that Cyprus is a single state and refusing to recognize the Turkish Republic of Northern Cyprus (TRNC). In addition, they do not hold back from carrying out international defamation campaigns against Turkey, which they portray as the party responsible for this impasse regarding the island. Furthermore, it should not be forgotten that the Greek Cypriots signed exclusive economic zone (EEZ) delimitation agreements with Egypt in 2003, at a time when the Annan Plan was being discussed, with Lebanon in 2007 and with Israel in 2010, all in an attempt to isolate the TRNC, which has the right to speak on behalf of the island as one of its two legal voices, and Turkey, the country with the longest coastline in the Mediterranean. To sum up, the Greek Cypriots’ opposition to Turkey and the Turks is not something merely conjunctural.

This growing opposition is also motivated by economic considerations, as the rich hydrocarbon resources discovered in the Eastern Mediterranean basin have the potential to offer a lifeline to the small Greek Cypriot economy, which has yet to recover from the impact of the global financial crisis of 2008. For this reason, the Greek Cypriots are looking to profit unilaterally from the Eastern Mediterranean’s natural resources while leaving the Turkish side (Turkey and the TRNC) completely out of the equation. The Greek Cypriots unilaterally dividing the region into 13 parcels and awarding multinational energy companies exploration and drilling licenses in these parcels is solely a product of this quest.

GCA’s activities against Turkey in the Eastern Mediterranean

One of the foremost activities the GCA has been carrying out against Turkey in the region in cooperation with Greece is the “Eastern Mediterranean Pipeline Project” (Eastmed). This project plans to transport natural gas from the Eastern Mediterranean to Greece via the GCA and the island of Crete, and from Greece to Central Europe via Italy. Although various initiatives have been taken regarding the EastMed project, which has also received institutional support from the European Union (EU) as well, field activities have not yet begun. In addition, even though delivering gas to Europe through Turkey is both cheaper and safer, this rational alternative is being discarded as a result of the actions of the Greek-Greek Cypriot duo. As a result, Italy, one of the potential partners of this project, saw through the scheme and declined to participate in the agreement signed between the GCA, Israel and Greece. We can accordingly conclude that the anti-Turkey Greek-Greek Cypriot alliance has been attempting to get actors supportive of the project to make irrational decisions.

It is also worth noting that, in reaction to Turkish activities in the Eastern Mediterranean, the GCA has taken a number of joint measures with Greece within the EU, and that the EU has taken a number of decisions against Turkey as a result. As far as recent decisions are concerned, we should recall, for instance, that the EU Foreign Ministers, who met in July 2019, agreed to suspend the high-level talks and the Comprehensive Aviation Agreement negotiations with Turkey, as well as to cut pre-membership funding due to Turkey’s drilling activities in the region. Following that, at the EU Leaders’ Summit in December 2020, they decided to impose gradual sanctions on Turkey, once again due to Turkish activities in the Eastern Mediterranean. The Greek-Greek Cypriot duo’s persistent calls for harsh sanctions and an arms embargo, on the other hand, were not approved at the summit. When these developments are taken into consideration, it becomes apparent that the Greek-Greek Cypriot duo is trying to turn the Eastern Mediterranean issue into a security issue in the eyes of the EU.

The GCA has recently incorporated France into its policies against Turkey in the Eastern Mediterranean. In this regard, the Defense Cooperation Agreement signed between the two countries was revised in 2017 and France was given a military base in return for the modernization of the Greek Cypriot army. Following this agreement, the two countries began to cooperate in the Eastern Mediterranean and held joint military drills frequently. We can better understand the economic and political foundations of the French-Greek Cypriot partnership developed in recent years by looking at the French energy company Total, which has been actively engaged in natural gas exploration in the parcels declared unilaterally by the GCA, in an attempt to benefit from the region’s wealth. In addition, we might argue that the GCA has been endeavoring to turn what should have remained an exclusively Eastern Mediterranean issue into an international one by bringing in a country from outside the region.

Parallel to these acts, it is important to remember that the Greek-Greek Cypriot duo recently joined forces with a variety of regional countries under an official umbrella. The Eastern Mediterranean Gas Forum (EMGF), which started as an unofficial mechanism led by the two countries in 2019, has expanded into an international organization based in Cairo and gained an official status last year. According to the statements released, the mission of the organization is to ensure a fair distribution of the natural resources in the region among the countries in the region. The fact, however that Turkey — once again; the country with the longest coastline in the Mediterranean — was not invited to the organization is a clear indication that Turkey is not wanted in the regional equation. Therefore, the organization’s ostensible mission is clearly at odds with the facts of the situation.

Lastly, the GCA has granted licenses to multinational companies for hydrocarbon exploration and drilling activities in the parcels it unilaterally declared, ignoring Turkey and the TRNC. Having made deals with international energy companies, i.e., the US ExxonMobil and Noble Energy, France’s Total, the UK’s BP, Italy’s ENI, Qatar’s Qatar Petroleum and South Korea’s KOGAS, and thereby endeavoring to make the Eastern Mediterranean issue an international one, the GCA is trying to preclude a possible Turkish intervention.

Against the alliance initiatives of the GCA with various countries in the region, and particularly Greece, as well as with multinational energy companies, Turkey maintains an active political presence, with both the diplomatic steps taken at the negotiation table and its military presence in the field, in defense of its national interests. In this context, the most important recent initiative taken by Turkey at the negotiation table is, without a doubt, the agreement signed with the Libyan Government of National Accord (GNA) on Nov. 27, 2019, because, with this agreement, the two countries have delimited their maritime zones in the Mediterranean in accordance with international law. Later on, the agreement was officially registered by the United Nations (UN) on Sep. 30, 2020. Thus, all efforts of the Greek-Greek Cypriot to misinform the international public about the agreement came to nothing. The strategic importance of this development for Turkey is that Turkey was able to interfere in the international scheme, led by the GCA and Greece, to unfairly delimit the maritime zones in the Eastern Mediterranean, and it therefore managed to have its national interests guaranteed under international law.

The signals of normalization with Egypt, with whom Turkey had tense relations for a long time, have to do with Turkey’s latest initiatives in the Eastern Mediterranean, which have deeply concerned the Greek Cypriots. The process that began with a recent move from Egypt, which recently put out a tender for natural gas exploration taking care not to include any one of the areas Turkey declared as its own, took on a new dimension when Turkish Foreign Minister Mevlut Cavusoglu stated that a maritime boundary delimitation agreement could be made with Egypt as well. The alliance that the Greek-Greek Cypriot duo has been trying to establish in the region is expected to weaken if the ongoing diplomatic talks between Turkey and Egypt yield a positive result. In fact, if Turkey and Egypt conclude a maritime boundary agreement similar to the one between Turkey and Libya, the Greek-Greek Cypriot duo’s claims to the Eastern Mediterranean will be legally nullified once again.

In addition to these diplomatic steps taken at the negotiation table, Turkey does not abandon its decisive stance on the ground either. Turkey’s activities on the ground continue with the dispatch of exploration and drilling ships to the Eastern Mediterranean, as well as the deployment of its military in the area to serve as a deterrent. It should be noted here that in 2018 a drilling ship of Italian ENI was stopped by Turkish warships while attempting to conduct exploration activities in parcels which Turkey had declared to be within its maritime boundaries. Following this development, the company announced that it had temporarily suspended its activities in the region. Therefore, Turkey, based on the principle of reciprocity, responds to the Greek Cypriots’ attitudes towards it in the Eastern Mediterranean.

In conclusion, we see that the GCA, in collaboration with its political patron Greece, has been following intense securitization policies against Turkey in the Eastern Mediterranean in recent years. However, the modest “successes” achieved through these securitization policies should not be regarded as major ones with permanent implications because they do not really amount to much in the face of a country like Turkey, which is not afraid to use its political clout at the negotiation table and its military strength on the ground to defend its national interests. Besides, the recent steps taken towards normalization with Egypt clearly demonstrate that, when necessary, Turkey can make game-changing moves and thwart the colossal ambitions of the GCA.

Yet again, Macron murmurs 'Turkeyphobia' for own sake
Previous

Analysis: Waiting for the Biden Administration: Can we expect a Change in Eu-Russia relations?
Next
Loading...
Loading...
We use cookies to ensure that we give you the best experience on our website. If you continue to use this site we will assume that you are happy with it.Ok