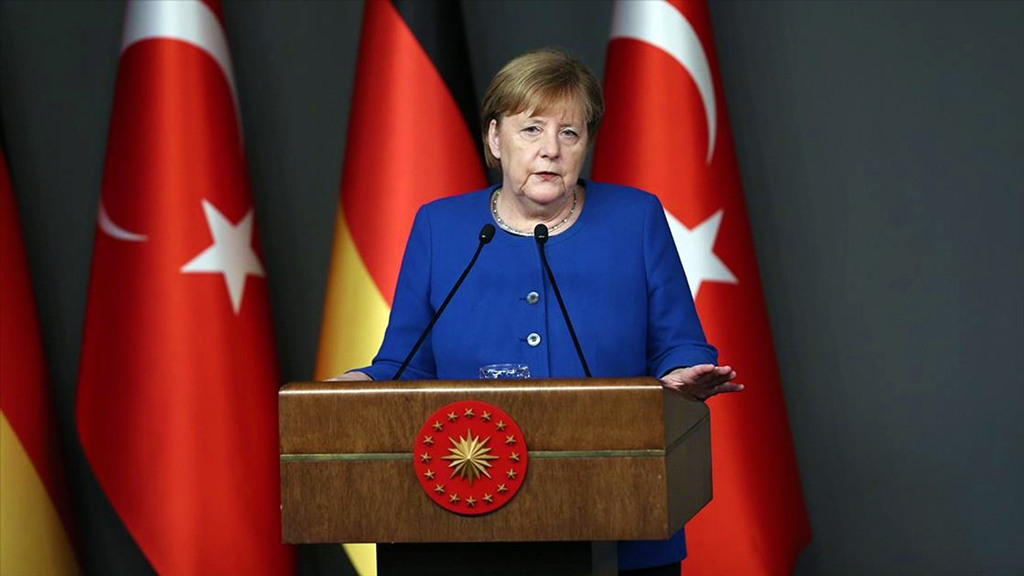 German Chancellor Angela Merkel, on a diplomatic offensive since the Berlin conference, visited Istanbul on Friday. The wide range of topics on her agenda included bilateral trade, the European Union, the situation in Idlib, the proposed safe zone, the Eastern Mediterranean, Libya and refugees, all of which stressed the importance of strengthening German-Turkish cooperation.

German Chancellor Angela Merkel, on a diplomatic offensive since the Berlin conference, visited Istanbul on Friday. The wide range of topics on her agenda included bilateral trade, the European Union, the situation in Idlib, the proposed safe zone, the Eastern Mediterranean, Libya and refugees, all of which stressed the importance of strengthening German-Turkish cooperation.

Let’s give credit where credit is due: Merkel’s foreign policy is far more reasonable than French President Emmanuel Macron’s approach. She understands that the road to protecting European interests goes through Turkey. Merkel played a key role in de-escalating tensions between Turkey and the EU back in 2017. Approaching the end of her tenure as chancellor, she hopes to cooperate with President Recep Tayyip Erdoğan to complete her political mission. The German leader appreciates the impact of refugees and the Libyan conflict on the EU’s future and the heavy lifting that Germany needs to do to keep Europe afloat. In the wake of Brexit, she grasps that Europe’s future depends on strong relations with three powerful outsiders: Russia, Turkey and Britain.

Angela Merkel knows that the U.S. abdication of its global responsibilities compels Europeans to take care of themselves and, by extension, to work with Erdoğan’s Turkey. In recent years, Ankara has been quite active in the geopolitical arena of Iran and North Africa. Most recently, Turkey’s two bilateral agreements with Libya reaffirmed the Turks’ indispensability.

Germany could cooperate with Turkey to strengthen its influence over key issues like the refugee deal, Iran sanctions, the allocation of Eastern Mediterranean energy reserves and the political process in Libya. After all, each new crisis in this part of the world reaffirms Ankara’s stabilizing role. The anti-Turkish sentiment in Europe contributes zilch to the resolution of Turkey-EU problems. For example, European politicians should stop interpreting Erdoğan’s warnings against Middle Eastern instability and the refugee crisis as “blackmail.” The potential influx of asylum seekers into Europe isn’t some card that Ankara intends to use against its friends and allies. If anything, Erdoğan’s statements should be seen as an offer of cooperation.

Turkey has borne the brunt of the Syrian civil war’s spillover, including terrorism and the refugee problem. Burden sharing is absolutely unavoidable in those areas. Europe’s commitment to ignoring the Syrian conflict rendered the EU more fragile and poisoned its relationship with the Turks. Europeans cannot repeat the same mistake in Libya. Merkel’s Libya policy and statements in Istanbul hinted at a continued need to heed the lessons of Syria. Still, her promise to provide additional financial support for Syrians in Turkey and a housing project in Idlib was a welcome development. Merkel did not rule out cooperation on the proposed safe zone either, leaving it up to the United Nations.

Still, the EU’s inability to devise a common foreign policy is no secret. Libyan warlord Khalifa Haftar won’t end his aggression without sanctions either. At a joint press conference on Friday, Erdoğan recalled that Haftar had refused to sign the cease-fire agreement and therefore could not be trusted.

To improve Germany’s relations with Turkey and keep the upper hand in Libya, Merkel needs to overcome two obstacles: French and Greek adventurism. Macron undermines Libyan peace and stability by throwing his weight behind Haftar, laying the groundwork for a new refugee wave and a heightened terror threat.

Another state sponsor of the Libyan warlord, Greece, is in an even worse situation. The Greeks have taken the EU hostage with their maximalist demands in the Eastern Mediterranean. It is obvious that Turkey’s maritime jurisdiction cannot be limited to the Gulf of Antalya. Greece can’t live up to its responsibilities regarding the resettlement of Syrian refugees either.

For the sake of Europe’s long-term, common interests, Germany has to stop France and Greece. Let’s see if Merkel will manage to wrap up her political career by completing this urgent mission.

The War in Syria
Next
Loading...
Loading...
We use cookies to ensure that we give you the best experience on our website. If you continue to use this site we will assume that you are happy with it.Ok