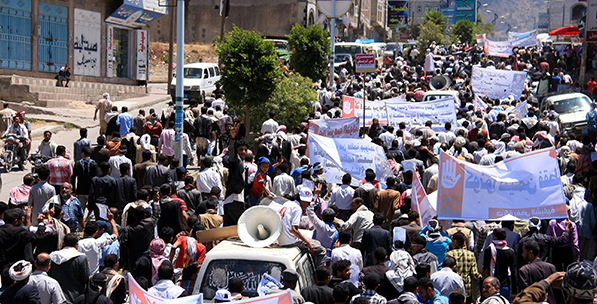 From Tolerance to Civil War?

While the wind of change turns cold in yet another country, Washington continues to make history by failing to manage the Arab Spring revolutions.

The most recent developments in the Middle East put Yemen’s world-famous “tolerance” to test. The country, where the Arab Spring led to a mild transition embodied by former President Ali Abdullah Salih’s replacement with Vice President Abdurabbu Mansour Hadi, had endured political turmoil for some time. With the Iranian-backed Houthi Movement seizing Sanaa and moving toward Aden, the country came to the brink of civil war. In response, President Hadi requested the United Nations as well as the Gulf Cooperation Council and the Arab League to authorize an international coalition to launch a military intervention to de-escalate the situation. Deeply disturbed by Iran’s growing influence and knowing that a Houthi government in Yemen would be a strategic loss, Saudi Arabia answered the call even though King Abdullah had turned a blind eye to the capture of Sanaa in order to weaken the Muslim Brotherhood in Yemen.

Many observers expected a fight between the Muslim Brotherhood and the Houthi Movement, but the former group decided to avoid sectarian clashes. The Houthi advances, therefore, resulted in the resignation and relocation of President Hadi to Aden. Meanwhile, the recently crowned King Salman moved to make up for his predecessor’s mistake and militarily engaged the situation in Yemen through the proxy of the Gulf Cooperation Council. On Wednesday night, 10 countries launched airstrikes against Sanaa – which turned the situation in the Yemeni capital into a full-blown proxy war between regional powers like in the Syrian and Libyan cases.

The United States currently provides logistics and intelligence support to the GCC-led military operation in Yemen. Most recently, National Security Council spokeswoman Bernadette Meehan turned down speculations about U.S. military involvement but announced that they worked closely with Saudi Arabia. What specific role Washington will play, of course, bears tremendous importance: For quite some time, Riyadh had not gone to great lengths to conceal their concerns over the Iran nuclear talks. The Obama administration, in turn, was reluctant to confront Tehran for the sake of achieving some success in the negotiations. At this point, the administration’s decision to support the latest military operation indicates that Washington will move to counterbalance Iran’s growing power in Yemen. Within a broader context, however, the Obama administration merely seeks new local partners to intervene in regional crises on its behalf – a low-cost strategy that perpetuates instead of addressing the problems.

While the wind of change turns cold in yet another country, Washington continues to make history by failing to manage the Arab Spring revolutions. Today, the most critical question relates to the repercussions of the Saudi-led military operation. It seems unlikely that Saudi Arabia will be able to strong-arm the Houthi Movement into diplomatic negotiations with no boots on the ground. It seems unlikely, however, that Iran and Saudi Arabia will risk a regionwide war. That the intervention will fall short of an undisputed victory for the Yemeni government represents the single greatest risk today, since such a scenario would entail the deepening of Yemen’s civil war as well as the proxy war between Saudi Arabia and Iran. In this case, a Syria-style civil war between the Houthi Movement, GCC-backed Sunni groups and al-Qaida/ISIS would not be a remote possibility.

The Economic Impact of a Presidential System
Previous

A Tale of Four Augusts: Obama's Syria Policy
Next
Loading...
Loading...
We use cookies to ensure that we give you the best experience on our website. If you continue to use this site we will assume that you are happy with it.Ok