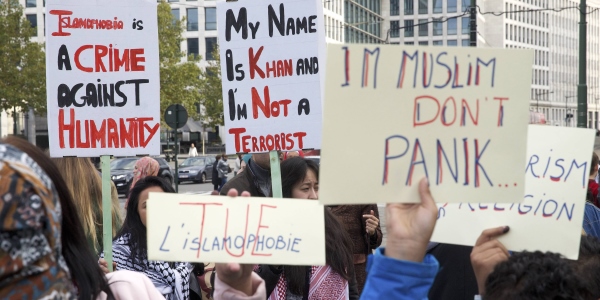 The Report is an annual report, which is presented for the first time this year. It currently comprises 25 national reports regarding each state and the tendencies of Islamophobia in each respective country.

As the leading think tank in Turkey, SETA felt an urgent need to address this problem. In fact, there are still people denying the very existence of racism against Muslims. Many state and civil society institutions, from the Fundamental Rights Agency (FRA) to the countless civil society organisations throughout Europe, have done priceless work to prove and establish the opposite. Yet, institutions like the FRA publish only irregular reports on a restricted number of countries while most civil society organisations tackle racism in general and only few focus on Islamophobia in particular – this is the urgent gap our report wishes to fill.

The European Islamophobia Report (EIR) is an annual report, which is presented for the first time this year. It currently comprises 25 national reports regarding each state and the tendencies of Islamophobia in each respective country. The current report features the work of 37 extraordinary scholars. In the years to come we will attempt to cover even more countries. This report aims to enable policymakers as well as the public to discuss the issue of Islamophobia with the help of qualitative data. At the same time, several of its unique characteristic features make a difference to the current state of the debate on Islamophobia. Studies on Islamophobia have in the past predominantly concentrated on Western Europe. This is especially the case with reports focusing on Islamophobia. The EIR is the first to cover a wide range of Eastern European countries like Serbia, Croatia, Hungary, Lithuania, and Latvia. This will enrich the debate on racism in general and Islamophobia in Europe in particular.

The EIR looks at the employment sector, education, politics, media, internet, the justice system, and networks. Islamophobia works without Muslims, as can be shown by the fact that Islamophobia played a role in the politics of many European countries, which has only a very small Muslim population. This trend was especially strengthened by the so called ‘refugee crisis’. Both attacks in Paris, which happened in 2015, became a discursive event that shaped the debates on Islam and Muslims throughout Europe.

The EIR reveals that Islam and Muslims and people perceived as such frequently become victims of exclusionary and discriminatory projects legitimized and fueled by Islamophobic ideology; be it women with a headscarf, who are refused a job, mosques that are attacked, or people, who suffer racial profiling. The EIR suggests a number of recommendations to overcome Islamophobia and strive towards more just and democratic societies. Most important is that Islamophobia has to be acknowledged as a crime and should be included in all national statistics throughout Europe. Also, the Muslim minorities have to be empowered to be able to use the rule of law and civic engagement against all forms of discrimination. More educational tools have to be offered to journalists, lawyers, police (security officials) and legal authorities in all European countries.

PS: For more Information about EIR: https://www.islamophobiaeurope.com/ (The Website will be accessible from 21.03.216 and you can download the whole report as well as national reports from EIR Website.)

The PYD Left Alone for a Federal Kurdish Entity in N. Syria
Previous

If We Do Not Want More Bombs to Go Off
Next
Loading...
Loading...
We use cookies to ensure that we give you the best experience on our website. If you continue to use this site we will assume that you are happy with it.Ok