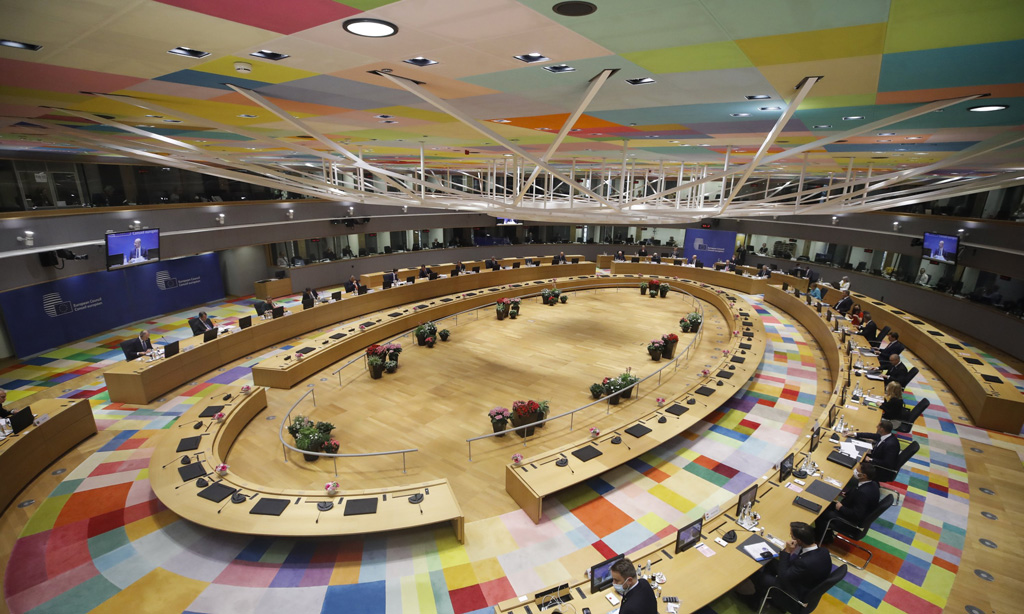 EU leaders gather in a main room during an EU summit at the European Council building in Brussels, Belgium, June 24, 2021. (AP Photo)

The leaders of the EU held another high-level meeting at the end of June. The meeting came after a busy diplomatic schedule for the month. With the G-7, NATO and U.S.-EU summits in June 2021, trans-Atlantic relations gained new momentum under Joe Biden's presidency in the U.S.

The leaders of the EU held another high-level meeting at the end of June. The meeting came after a busy diplomatic schedule for the month. With the G-7, NATO and U.S.-EU summits in June 2021, trans-Atlantic relations gained new momentum under Joe Biden’s presidency in the U.S.

The destructive effects of former U.S. President Donald Trump’s legacy have not been reversed yet, but Washington demonstrated a new enthusiasm to work with its allies in the European continent.

There were mixed feelings in Europe about strengthening cooperation with Washington, especially in security and foreign policy.

Biden’s efforts so far are not enough to restore the trust and solidarity between the U.S. and the EU after the negative legacies of the Trump presidency and COVID-19.

Certain controversial topics such as how to engage with China as well as economic cooperation and coordination for post-coronavirus recovery were postponed in order to maintain the positive tone in trans-Atlantic relations.

A chapter with Moscow

Engaging with Russia was one of the critical debates among the European leaders at the latest leaders’ summit. How to engage with Russia and the limits of the EU’s autonomy in foreign policy and defense were points of disagreement among the EU member states.

While the Baltic countries, Poland, the Czech Republic and Romania, defend a more hardline approach against Moscow, Germany and France support a more constructive, conditional approach that leaves space for dialogue. This issue will continue to fragment EU member states in the coming years.

After the NATO and EU-U.S. summit, Biden went to Geneva to talk to his Russian counterpart Vladimir Putin more confidently. However, for Moscow, it is clear that the issue will continue to be a disagreement between Brussels and Washington.

It seems that aims to contain Moscow using a multifaceted approach will continue to be unpopular in Europe.

If Moscow takes intelligent, well-balanced and constructive diplomatic approaches with key EU members, the division within the EU could deepen even further.

However, another cycle of aggressive diplomatic and military moves from the Russian side will unite and strengthen the position of European actors against Moscow.

One key achievement of the last leaders’ summit was the struggle against the coronavirus pandemic and the economic recovery plan.

The EU leaders have made remarkable strides by agreeing on a post-coronavirus recovery plan, which is also harmonized with the green transformation.

For Turkey, the latest leaders’ summit failed to promise any constructive steps. Indeed the summit was a big disappointment for Ankara, who was preparing to reenergize relations with Brussels.

The discourse of the positive agenda with Turkey failed to result in concrete outcomes. It is now clear for many in Turkey that the supposed “positive agenda” was in fact insincere and only mentioned to contain Ankara’s autonomous efforts.

The final declaration had nine items related to Turkey but none of those articles mentioned Turkey as a candidate country. There were no concrete steps to substantiate a positive plan with Turkey, even the dialogue with Turkey was connected to certain conditions. Turkey needs no conditions to talk to her European counterparts.

Aid to Syrian migrants was mentioned in the final declaration, but migration cooperation is not a peculiar step for Turkey. There were no specific references to the EU-Turkey statement of March 18, 2016.

Despite nine months of “positive agenda,” no concrete steps have been taken to normalize relations with Turkey. The European side had promised things such as:

The main points of the EU-Turkey statement of March 18, 2016, seem to be far on the horizon. But Turkey continues its commitments related to migration and efforts to reduce tensions in the Eastern Mediterranean.

Talk of the positive agenda excited supporters of the EU agenda in civil societies as well as official actors. This short period of optimism quickly turned into disappointment due to the EU’s constant procrastination.

Given the established Euroscepticism in Turkey, the only disappointed actors were the Europhiles. It is evident and proven in the past that when Turkey-EU relations do not move forward, they tend to move backward.

Some EU member countries may be happy about the deterioration of EU-Turkey relations, but maintaining the negative stalemate will also weaken the EU’s long-term strategic posture.

The official position in Turkey is that the EU’s “positive agenda” concerning Turkey is “insincere.”

This will make the collaborative approach in Turkey-EU relations in Turkey more challenging than six months ago when there were looming hopes.

The beneficiaries of this insincere approach are the Turkophobic circles in Europe and the widening Eurosceptic circle in Turkey.

EU leaders should stop hiding behind the Greek and Greek Cypriot claims as an excuse to delay improving relations with Turkey.

The credibility of the ‘positive agenda’ is at stake. Ankara and the wider Turkish public may lose interest and enthusiasm to improve dialogue and collaboration with the EU if this insincere official position continues.

What does the Second Berlin Conference mean for Libya?
Previous

Is the last EU summit surprising?
Next
Loading...
Loading...
We use cookies to ensure that we give you the best experience on our website. If you continue to use this site we will assume that you are happy with it.Ok