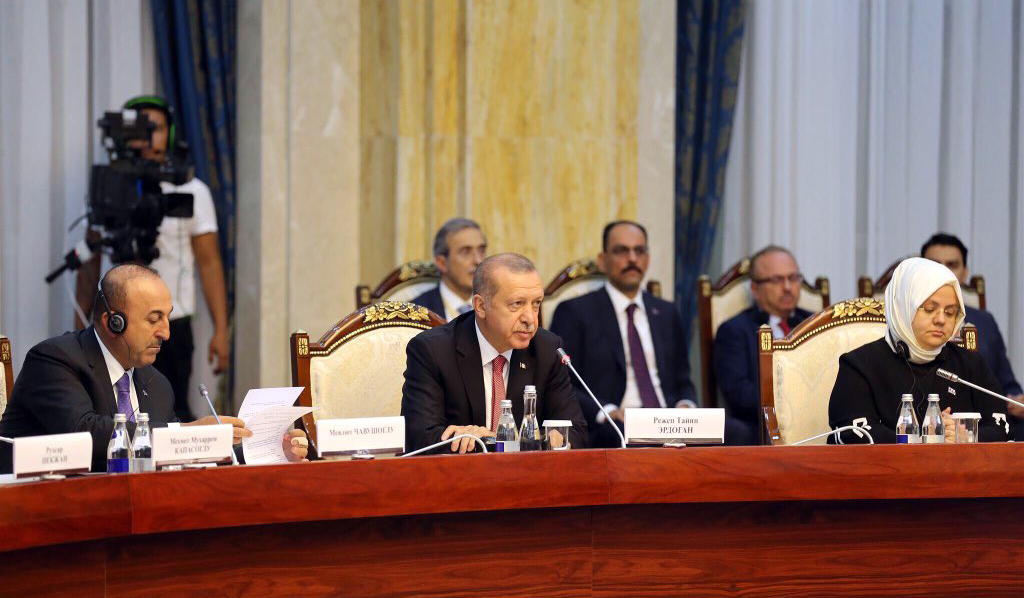 Earlier this week, President Recep Tayyip Erdoğan was in Bishkek, Kyrgyzstan along with a large delegation, including myself. The top two items on the agenda were the economic integration of the Turkic world and the fight against the Gülenist Terror Group (FETÖ).

Earlier this week, President Recep Tayyip Erdoğan was in Bishkek, Kyrgyzstan along with a large delegation, including myself. The top two items on the agenda were the economic integration of the Turkic world and the fight against the Gülenist Terror Group (FETÖ).

Attending the 6th Summit Meeting of the Turkic Council, Erdoğan called on his counterparts to “trade in local currencies to eliminate the Turkic world’s dependence on the U.S. dollar.” The Turkish leader has been making this recommendation to emerging economies, including the BRICS – namely Brazil, Russia, India China and South Africa, and the rest of Turkey’s trade partners. Having witnessed first-hand how Washington weaponizes the greenback, Ankara has discussed this idea with other players that are directly or indirectly affected by U.S. President Donald Trump’s trade wars. Although some time is needed to complete this transition, the idea is starting to take hold. A new global trade regime cannot emerge unless the world questions the U.S. dollar’s existing hegemony.Another indispensable part of Erdoğan’s agenda on international trips has been to crack down on FETÖ’s safe havens outside Turkey. This effort is key to preventing the organization from elevating itself to a strategic threat at home and to eliminate its networks in friendly countries, where it exploits Turkey’s name and resources. To be clear, the Turkish president isn’t just trying to eliminate anti-Turkey elements abroad. Turkey has a responsibility to raise awareness about the true face of FETÖ in all countries with which we enjoy cordial relations. After all, the organization uses the same tactics in all countries, where they operate behind the facade of educational institutions. It admits the children of elites into those schools and, later, uses new recruits to infiltrate public institutions of the host country. Finally, the group seeks to take control of key sectors and shape the country’s political landscape – to the advantage of whichever powers it serves and against the vital interests of the host country, of course.Kyrgyzstan is particularly significant in the fight against FETÖ as the organization created a vast network there, along with the rest of Central Asia, following the Soviet Union’s disintegration. Since 1992, it has founded a university, 27 schools and countless student housing facilities to recruit over 10,000 new members in Kyrgyzstan. Today, FETÖ owns an estimated $100 million worth of property in the country. Moreover, the Turkish authorities maintain that thousands of FETÖ members have relocated to Kyrgyzstan in the wake of the July 15, 2016 coup attempt in Turkey. In this regard, the country finds itself extremely vulnerable to the FETÖ threat.

In his address at the Manas University, Erdoğan reiterated this point: “You are our brothers and sisters. The people who carried out a coup attempt on July 15 against us could launch a similar attack against you in the future. They are traitors and lowlives. We want to warn our brothers and sisters. These people will take control of your military, your law enforcement, your judiciary and your universities. Then, one night, the unexpected could happen without any advance warning.” This was a friendly warning out of concern for a fellow nation’s sovereignty.Cracking down on the FETÖ network would serve Bishkek’s interests the most. The Turkish government expects Kyrgyzstan to transfer the ownership of FETÖ-linked schools to the Maarif Foundation and to extradite 13 senior leaders of the organization to Turkey. It is important to note that the country’s newly elected president, Sooronbay Jeenbekov, has taken Ankara’s warnings far more seriously than his predecessor, but there’s a certain path that must be followed. For the time being, the Kyrgyz government has increased state control over FETÖ-linked schools and sent away Turkish teachers. At the same time, it has allowed Turkey to launch new schools under a bilateral treaty.

Despite those positive developments, it is crucial to keep in mind that the FETÖ members in Kyrgyzstan, along with fugitives from Turkey, have accumulated enough power to darken the country’s future. Under the circumstances, the Kyrgyz government has no choice but to gradually eliminate the FETÖ presence within its borders. Bishkek has many lessons to learn from Turkey’s fight against the organization. It would be wise to heed President Erdoğan’s warning.

Zero progress from Washington's Syria desk
Next
Loading...
Loading...
We use cookies to ensure that we give you the best experience on our website. If you continue to use this site we will assume that you are happy with it.Ok