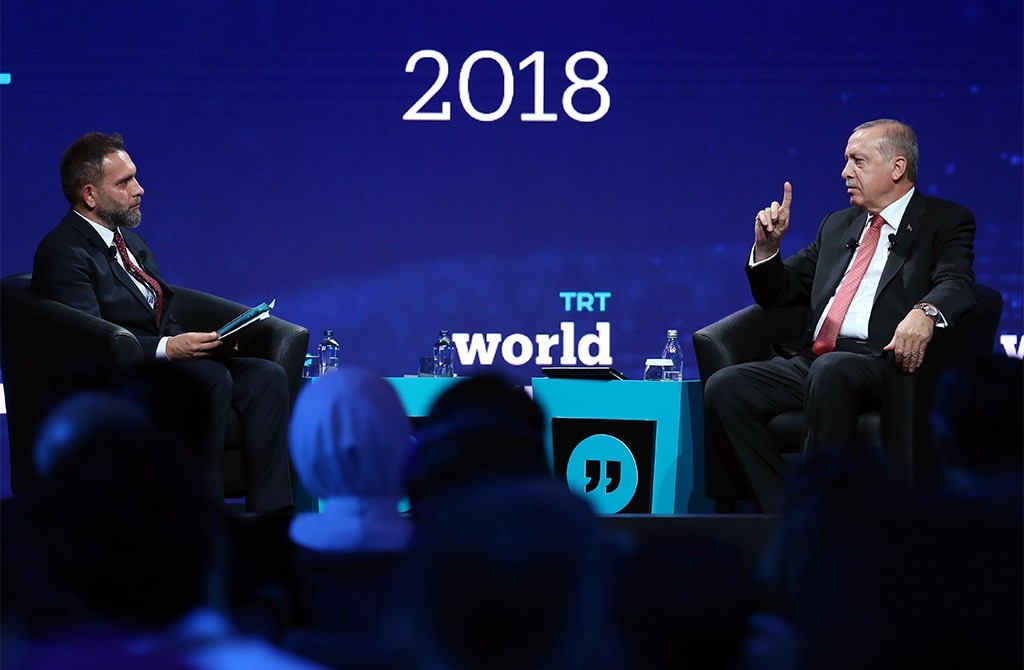 President Erdogan: “There are many things that we can contribute to the European Union. They may have things to contribute to us but what should be done is, I suppose, to consult with 81 million people [in Turkey] and see what they will decide.”

In an interview at the TRT World Forum, Turkish President Recep Tayyip Erdoğan said that voters could decide the fate of Turkey’s European Union membership bid. He publicly announced that a referendum could be held to decide whether or not to pursue full membership in the organization. Erdoğan talks about pressing problems in Turkey’s relations with the European Union quite frequently. As a matter of fact, he has repeatedly called on European nations to stop keeping his country at bay and to reach their final decision without further delay. After all, the Turks have been sitting in the European Union’s waiting room since 1963. During this period, a number of countries have been granted membership despite failing to meet the Copenhagen criteria – which Erdoğan finds unacceptable. To be clear, this isn’t the first time that the Turkish president talked about a referendum on EU membership. Around the same time as the Brexit referendum, Erdoğan had said that a similar development could take place in Turkey.

It was noteworthy that the Turkish leader discussed the possibility of a referendum against the backdrop of his country’s ongoing rapprochement with Germany and the Netherlands, and ahead of a quadripartite summit featuring representatives of Turkey, Russia, Germany and France in Istanbul. The fact that he raised the issue so soon after an official visit to Berlin made observers ask the following questions: What was the purpose of Erdoğan’s statement as Turkey could potentially make a fresh start with the European Union? Is joining the European Union no longer a strategic goal for Ankara? At a time when the global turmoil deepens, does Erdoğan think that it’s time for a “Turexit” or “Trexit?” If Turkey ends up holding a referendum, would the vote serve as a recommendation or be legally binding? Would the referendum take place before, during or after the upcoming local elections?

It would seem that Turkey will be looking for answers to those questions. First of all, it is necessary to stress that the country’s relations with Europe take place on two distinct levels: Turkey’s bilateral relations with European countries and institutional integration into the European Union. One could argue that the most recent rapprochement with Germany and the Netherlands was limited to bilateral relations. For example, the German government wants to repair its relations with the Turks to prevent an additional influx of refugees into the European mainland, to maintain bilateral trade relations, to exert additional influence on the Syrian theater, to cooperate with Ankara against U.S. sanctions and to keep the Turkish community in Germany under control.

Some would add that Germany’s most recent steps were strategically important due to the United States and President Donald Trump’s vocal criticism of NATO and the European Union’s security. As a matter of fact, French President Emmanuel Macron recently said that Europe could form strategic partnerships with Turkey and Russia to protect itself from the coming chaos. Yet bridging the gap between bilateral strategic partnerships and institutional integration has proven an elusive task. It is possible to make the case that improving bilateral relations could make a positive impact on Turkey’s EU accession process. Still, it’s a difficult claim to substantiate. In recent years, the European Union has been unwilling to even grant visa-free travel to Turkish citizens, to which it agreed in an effort to stem the influx of refugees – let alone open new chapters in membership talks. Efforts to update the customs union agreement have been crippled by similar problems.

Members of the European Union are inclined to meet their strategic needs by adopting a new policy, whereby they seek to de-escalate tensions and repair their bilateral relations with Turkey, to cooperate with the Turks on trade and refugees, and to keep Ankara in the waiting room – without letting it get away. In doing so, they aim to keep a strategic partner against Washington and Moscow in their corner without deeper institutional engagement. My sense is that Erdoğan’s message to the European Union was his way of objecting to this new European policy. There is no doubt that Turkey and the European Union need each other. Due to economic turmoil, some argue that Ankara’s short-term needs are more pressing. By contrast, Europe has no choice but to work more closely with the Turks to address longer-term problems, including the rise of xenophobia, Islamophobia and far-right movements along with security.

The new “strategic” approach that Berlin and Paris have embraced cannot talk the Turks into anything by pledging additional investment. Improving bilateral relations isn’t enough. At the very least, the European Union must be ready to talk about visa liberalization and updating the customs union agreement. In this sense, Erdoğan didn’t shut the door on Europe but instead urged European leaders to reconsider their “strategic calculations.” It remains unclear whether the time for Trexit has come. Yet it is crystal clear that the current state of affairs is unsustainable.

Members appointed to newly formed presidential councils
Next
Loading...
Loading...
We use cookies to ensure that we give you the best experience on our website. If you continue to use this site we will assume that you are happy with it.Ok