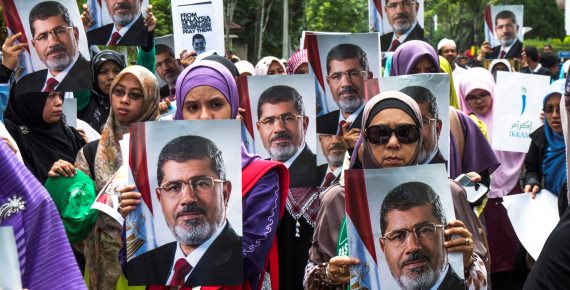 The events of July 3 represent nothing but pure political pornography. The sole truth and reality remains: Mohamed Morsi, the elected president of Egypt, lost his power to a military junta and its international solidarity networks.

On June 24, 2012, Ahmad Shafik received 51.7 percent of the vote to become the first president of Egypt in the post-Mubarak era. Saudi Arabia, the United Arab Emirates, the United States and the European Union were the first to congratulate the president-elect. It was an unexpected victory for Shafik, who was an important figure during Mubarak’s tenure. Meanwhile, his rival from the Justice and Freedom Party, Mohamed Morsi, accused Shafik of electoral fraud. When asked to comment on the outcome, Morsi argued that “Shafik, coupled with Mubarak’s high judiciary, military and bureaucracy, have sentenced the country to a fraudulent election process.”

The White House Press secretary stated that Morsi “must accept election results as an inherent part of democracy and gracefully accept his role in the opposition” and argued that the former Mubarak man’s victory in the elections did not necessarily cast a shadow on the outcome of free and fair elections. The elections received broad coverage in the Turkish media as well. Particularly among secular news outlets, Shafik’s victory was celebrated as the Arab Spring’s warning shot to all Islamist politicians and commented that the PM Recep Tayyip Erdoğan’s post-Arab Spring foreign policy had thus collapsed.
Over the next months, the judiciary’s ruling to suspend the Parliament triggered widespread protests for the legislature’s reinstitution. Media outlets in Egypt and elsewhere echoed the same sentiment: “Devoid of democratic maturity, the Islamist masses attempt to jeopardize Egypt’s transition process and pressure the elected president.” Western governments released statements in support of Ahmad Shafik and warned that parties must not resort to street violence in their efforts to impeach the elected government. Meanwhile, they cited dozens of lethal attacks on Shafik’s party headquarters over the past six months as a sign that Islamists did not support democracy.

With regard to Shafik’s decision to maintain the military’s privileged position in the new Constitution, EU officials noted that it would be naive to expect Egypt to establish the world’s most democratic legal system over a few months. Meanwhile, the media reported that the military allied itself with the Islamists amid troubles and serious political turmoil in June 2013. In response, Western governments commented that they could not possibly allow Egypt to become “yet another Sudan” and discredited the use of street violence to threaten the country’s legitimate leadership. When a group of army officials issued a 48-hour ultimatum to the Shafik government, the White House released a strongly worded statement to condemn the latest developments. On July 3, the military coup led Western governments to suspend all diplomatic relations with the country. The Western media declared that the Islamist coup destroyed all hope for democracy that arose out of the Arab Spring revolutions and stated that this was indeed a military coup and an illegitimate act against the elected government even though the mobs voiced their support.

How many today could claim the above scenario to be unrealistic? Surely, what exactly happened in Egypt is no longer relevant. Because a new liberal standard is to “focus on actors as opposed to events.” For this reason exactly, the events of July 3 represent nothing but pure political pornography. The sole truth and reality remains: Mohamed Morsi, the elected president of Egypt, lost his power to a military junta and its international solidarity networks.

Iraq: A Quest for a New Political Balance
Previous