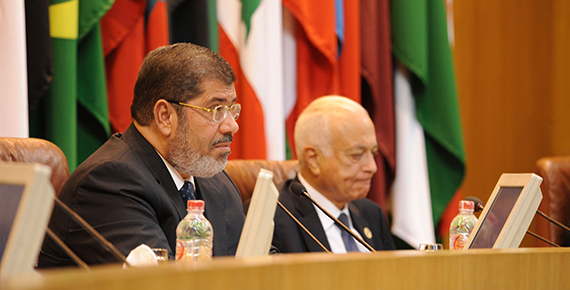 Egypt Finally Gets Involved in the Syrian Crisis

The new Egyptian president has begun to make some political moves as crucial as ending the Mubarak regime. Mohamed Morsi, who managed to make Egypt’s military tutelage retreat, as expected, has now made his move on the Syrian issue. This move is as important for Iran and Saudi Arabia as it is for Egypt. Morsi called for a coalition of Iran, Saudi Arabia, Egypt and Turkey to settle the Syrian crisis.

This call is the last chance for Iran to leave behind its destructive role in the Syrian crisis. For Saudi Arabia, this call represents an opportunity to give up its claim on the proxy war being fought in Syria, spilling Syrian blood, and to talk about the real issue in the Syrian case. For Turkey the call means getting the chance to become involved in a regional initiative to settle the Syrian crisis, just as Turkey repeatedly called for during the first few months of the crisis. For Egypt, the partnership would mean that it would finally restore its relationship with Syria, which has been broken since the failed attempt at an Egyptian-Syrian union in 1958, which lasted only three years.

Whether this quadripartite cooperation will have any positive impact on the Syrian crisis will depend as much on what Morsi actually has in mind with this call as it does on the Iranian and Saudi Arabian responses. Morsi must stipulate the exclusion of al-Assad from any settlement discussions as a prerequisite to this regional coalition. Morsi’s suggestion must not be overshadowed by the Geneva talks. We have reached a point in the crisis when the only way to talk about a real solution to the Syrian crisis assumes a Syria without al-Assad.

Iran’s political attitude favors talks and deliberations. However, Syria today is a place where cities are being annihilated, tens of thousands civilians are being massacred, and hundreds of thousands are forced to become refugees. Iran should not conflate the Syrian issue with the nuclear deliberations it utilizes to increase its visibility in the international stage. Iran must unequivocally accept the prerequisite of a solution without al-Assad. Morsi is extending huge credit to Iran — a country with which Egypt has not maintained even basic diplomatic relations. Iran could repay some of the credit it defaulted on by supporting the Syrian Ba’ath regime by taking a new position on the issue. The final decision belongs to Iran.

Had Iran not supported the Ba’ath regime, probably Iran’s dilemma today would belong to Saudi Arabia. An elected government chosen by the free people of Syria, and a government that is not happy about the Camp David order is probably not what the Saudis, with another family-run state like the al-Assads’, would wish for in the region. This is evinced by the way Saudi Arabia reacted to the uprisings in the tiny state of Bahrain. Nevertheless, Saudi Arabia, should it wish to, could open the door to its own democratization by supporting Morsi’s call. When the flame of the uprisings sparked in Tunisia reached Egypt, it was said that Egypt was not Tunisia. When the flames fueled in Egypt reached Libya, it was said that Libya was not Egypt. When the flames jumped from Libya to Syria, it was said that Syria was not Libya. The Saudi administration probably thinks that Saudi Arabia is neither Tunisia nor Egypt, neither Libya nor Syria. The Saudi administration could find an opportunity — how ever tiny the window of opportunity is — to invest in its own future by responding positively to Morsi’s call. The final decision belongs to Saudi Arabia.

Operation Hatay
Next
Loading...
Loading...
We use cookies to ensure that we give you the best experience on our website. If you continue to use this site we will assume that you are happy with it.Ok