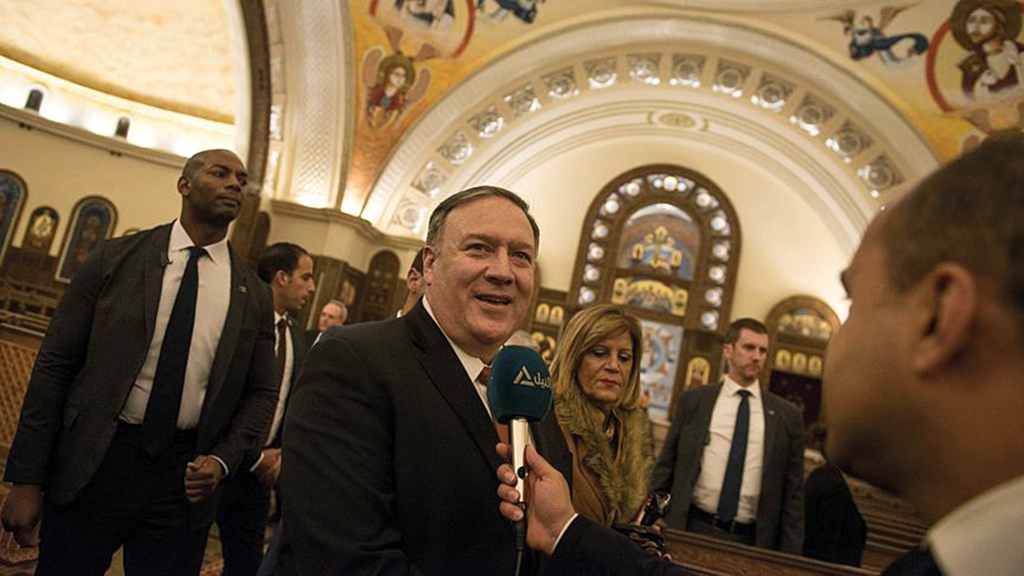 11.01.2019 | In his speech at the American University of Cairo, Pompeo said the Middle East Strategic Alliance, or MESA, would confront the most serious threats in the region and boost energy and economic cooperation. (AA)

The Trump administration remains confused and divided over Washington's imminent withdrawal from Syria. Most recently, Secretary of State Mike Pompeo visited the Middle East in an attempt to reassure U.S. allies, who are concerned that the U.S. withdrawal will serve Turkish and Iranian interests.

The Trump administration remains confused and divided over Washington’s imminent withdrawal from Syria. Most recently, Secretary of State Mike Pompeo visited the Middle East in an attempt to reassure U.S. allies, who are concerned that the U.S. withdrawal will serve Turkish and Iranian interests.

In his address at the American University in Cairo, Pompeo pledged to “expel every last Iranian boot” from Syria through closer cooperation with U.S. allies, harsher economic sanctions and diplomacy. “There will be no U.S. reconstruction assistance for areas in Syria held by [Bashar] Assad until Iran and its proxy forces withdraw,” he added.

Here’s the problem with Pompeo’s approach: How exactly is Washington supposed to kick the Iranians out of Syria, provided that Trump wants to pull out and his administration can’t seem to agree on a road map with Turkey? The Assad regime and Iran are strategic partners and their cooperation rests on the Shiite militias. Threatening not to help with reconstruction efforts won’t end Assad’s alliance with Tehran. Harsher U.S. economic sanctions will probably hurt the Iranian economy in 2019, but it would be a mistake to underestimate the stubbornness of Iranian nationalists and the country’s ability to target U.S. interests directly if necessary.

Pompeo’s choice of venue for that foreign policy address had vast symbolic significance. A decade ago, the then-President Barack Obama had delivered a historic address in Cairo that marked the beginning of a new direction in U.S. foreign policy. America’s top diplomat described the Obama administration’s Iran policy as a mistake that fueled region-wide chaos over the past decade. Pompeo added that the nuclear deal achieved nothing but strengthened Tehran’s hand and facilitate Iran’s uncontrollable support for Hezbollah and Shiite militias in Syria. His proposed solution was to mount more pressure on the Iranians.

For the record, Pompeo was right to blame Obama for clearing Iran’s path and unleashing chaos in the Middle East as a result. It is true that the Obama administration enabled Shiite expansionism for the sake of containing Sunni radicalism. Yet it is important to keep in mind the Trump administration fueled chaos as well – by promoting Sunni-Shiite polarization.

Washington’s misguided decision to serve the narrowly-defined interests of Israel and the Gulf states in the name of containing Iran wasn’t a great idea either. That choice will entail violence and destruction as opposed to law and order. Ironically enough, Pompeo fails to understand the region and repeats Obama’s mistakes.

At the heart of Trump’s anti-Iran team’s misconception lies their perspective on Turkey. The U.S. cannot implement its Middle East policy by relying exclusively on Israel, Egypt and the Gulf, and refusing to coordinate its actions with Turkey. Judging by National Security Adviser John Bolton’s remarks in Tel Aviv, where he said Turkey not targeting the PKK-affiliated People’s Protection Units (YPG) was a precondition of the U.S. withdrawal, Washington’s Turkey policy remains under Israeli and Gulf influence. Lending an ear to observers that identify Turkey, not Iran, as the real threat, leads Washington down the wrong path – a mistake that another U.S. diplomat might have to criticize in two years in Cairo.

The Washington-backed bloc, comprised of Israel, the Gulf and Egypt, calls for dual containment. They want the U.S. to directly and aggressively contain Iran’s influence. At the same time, they demand an indirect and unofficial containment on the Turks. It’s not that they are less unhappy with Turkey’s growing regional clout, quite the contrary. Ankara stands to become the most powerful regional player in the long run, thanks to its active foreign policy, democratic credentials, a strong economy and President Recep Tayyip Erdoğan’s credit on the Arab street.

Iran’s regime, by contrast, cannot inspire the people of the Middle East. Yet Washington needs the Turks within the NATO framework and European governments rely on Turkey as part of the EU. Hence, the call for indirect containment. As a matter of fact, the Turks have faced some type of indirect containment since 2013. There is no reason to believe that Trump followed in the Obama administration’s footsteps in this area. Yet that idea isn’t entirely unpopular in Washington. To be clear, Israel and the Gulf are heavily invested in the dual containment policy and they will do everything in their power to prevent Trump from coordinating the U.S. withdrawal from Syria with Turkey.

The Trump administration must find a way to avoid the trap of dual containment.

Turkey-US cooperation key for the stabilization of Syria
Previous

The lose-lose game in Syria
Next
Loading...
Loading...
We use cookies to ensure that we give you the best experience on our website. If you continue to use this site we will assume that you are happy with it.Ok