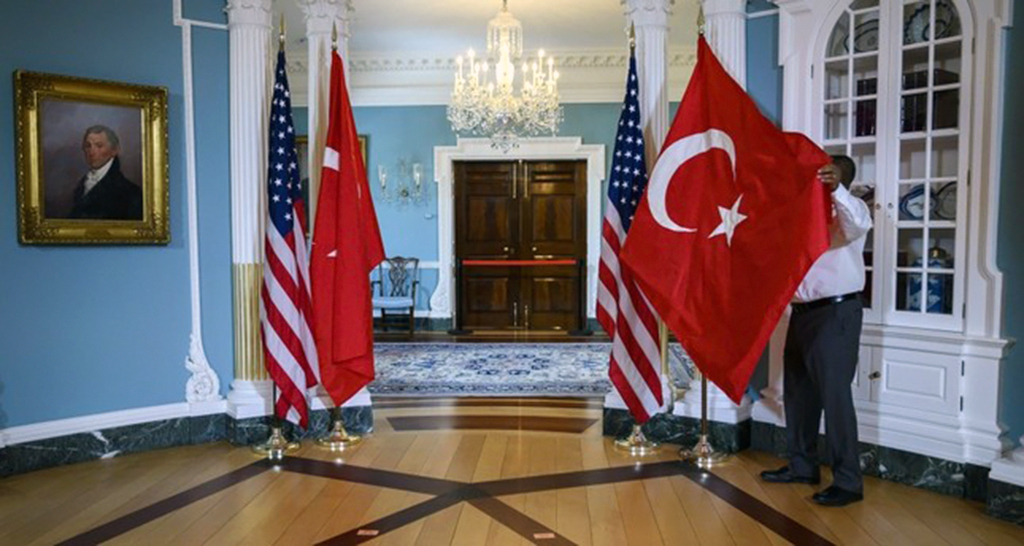 A U.S. State Department staffer adjusts a Turkish flag before a meeting between Foreign Minister Mevlüt Çavuşoğlu and U.S. Secretary of State Mike Pompeo at the State Department in Washington, D.C., April 3, 2019.

Over the last five years, Turkey-U.S. ties have gone through one of the most turbulent periods in the long history of relations between the two countries. Despite previous crises, seldom have we seen so many incidents over such a short period of time.

Over the last five years, Turkey-U.S. ties have gone through one of the most turbulent periods in the long history of relations between the two countries. Despite previous crises, seldom have we seen so many incidents over such a short period of time.

Analysts and observers of the relationship have provided various explanations for the deterioration of ties and inability of the parties to resolve their differences. It is true that there has been a conflict of interest between the two countries, and these divergences could not be reconciled, especially on issues like Syria.

On top of these, there were also critical public diplomacy accidents between the two countries. Pictures of U.S. officials with PKK members, the tweets of the U.S. agencies glorifying a terror group and the use of People’s Protection Units (YPG) armbands by American servicemen contributed greatly to the growing public reaction toward the U.S. and its policies in Syria while taking the mutual trust to an all-time low.

For the public in Turkey, it is still not clear what was the main purpose of those who engaged in the dismantling of bilateral relations. For years now, despite all the protests by Turkey, the same actors and agencies are taking steps that can seriously endanger long-term relations. While the Turkish government at its highest level has tried to mend ties between the two nations, the presence of some of the actors, who considered Turkey’s position in Syria a serious challenge for their ambitions, prevented the resolution of the problems.

In the latest volume of the foreign affairs journal, Brett McGurk, the former special presidential envoy for the Global Coalition to Counter ISIS (Daesh), published an article. From the article’s tone on Turkey, one of the main challenges between Turkey and the U.S. over the last few years became clear.

McGurk, who angered Ankara and the Turkish public by cozying up with the YPG and giving undiplomatic statements about Turkey, resigned following President Donald Trump’s decision to withdraw from Syria.

In his article, it becomes clear how he perceived Turkey’s role and Turkish-American relations during his tenure. He, in fact, wrote that one of the principal goals of the U.S. strategy in Syria was “checking the ambitions of Turkey” besides ensuring the defeat of Daesh and reaching a solution to the problems with Russia. It is not clear what he means by the “ambitions of Turkey,” but farther into his article he criticizes Turkey while avoiding the use of a similar tone for other countries in the Middle East.

At one point he called Turkey “a problematic ally,” even before any disagreement in Syria. It is obvious that McGurk did not understand the meaning of a true alliance, and the repercussions and outcomes of supporting a group that was considered terrorists by an ally. Meanwhile, glorifying the group and turning a blind eye to the crimes committed by its members resulted in serious problems between the two countries.

Long before members of the U.S. administration started to discuss an exit strategy in Syria, Turkish officials and experts, alongside the most prominent experts on Syria, were asking the U.S. about the end goal of the cooperation between the YPG and the U.S. When the members of the administration described the nature of the relationship with the YPG as only tactical, temporary and transactional, the Turkish side expressed its concerns about the potential extent of this relationship.

However, some of the actors on the U.S. side tried to underestimate the destructive impact of their actions in Syria to their strategic partnership with Turkey. They did not have a plan to fix the ties with a NATO ally after a very risky move of supporting a terror group. They lacked a long-term perspective in the U.S. foreign relations with the countries in the region.

These actors have largely contributed to the deterioration of ties and turned the tension into crises between the two countries. They have become part of the problem instead of becoming an actor in the solution. It is important to understand that the relations today have reached this low point thanks to the counterproductive contributions of such individuals.

Maintaining morale ahead of the June 23 elections
Previous

Is war with Iran the next step?
Next
Loading...
Loading...
We use cookies to ensure that we give you the best experience on our website. If you continue to use this site we will assume that you are happy with it.Ok