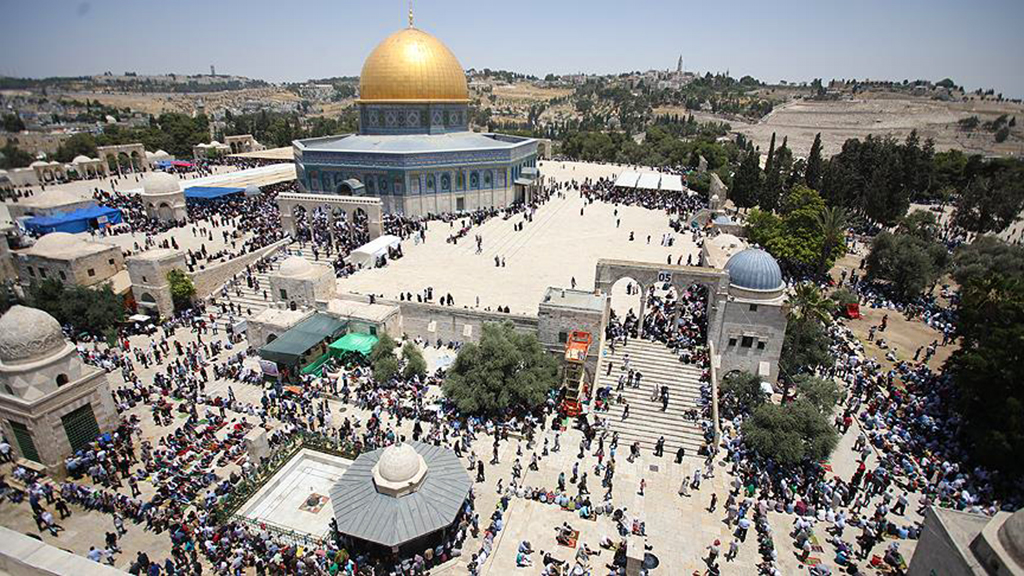 Don’t cry for Al-Quds, take a stand for justice

The conscience of humanity was haunted this week by the open-air massacre of unarmed Palestinian demonstrators in Gaza by the Israeli army pretending to fight “terrorist groups affiliated with Hamas.” An 8-month-old baby, innocent children, women, elderly and disabled individuals were among those who lost their lives, and over 2,500 others were wounded.

The perilous alliance between U.S. President Donald Trump and Israeli Prime Minister Benjamin Netanyahu seems to have eventually succeeded to provoke mass protests with the much publicized opening ceremony of the U.S. Embassy in Jerusalem and caused grave human suffering at the end.

While Ivanka Trump, Jared Kushner, the Netanyahu family and the diplomatic elite in Jerusalem were celebrating the illegal move of the Trump administration to launch the U.S. Embassy with pure joy and excitement, innocent civilians were under heavy gun fire in Gaza just 50 kilometers away.

Humanity was faced with one of the most outrageous instances of injustice and oppression as the dominant global power and its chief regional ally were blatantly disregarding international law, the United Nations resolutions and fundamental human rights of one of the most vulnerable communities on earth. This was not the first occasion in history, nor it will be the last on which the whole Palestinian society was dubbed as “terrorists” and were left to suffer under the real bullets and fire power of the Israeli army. But it was truly shocking to watch a bunch of American-Israeli elite enjoying music, taking selfies, video conferencing with President Trump and celebrating wildly as tens of people were violently killed and thousands were wounded at exactly the same time on live TV. There was no sense of legal justification or proportionality in the unacceptable response of the Israeli army to unarmed protesters who were defending a just cause according international law. The sheer indifference of international media outlets, global public opinion and particularly that of the Muslim world to an open case of state terror on the 70th anniversary of the “Nakba” (catastrophe) was truly shocking as well.In this column, we repeatedly emphasized how the irresponsible foreign policy line of Donald Trump and Co. which does not recognize international law, established norms and humanitarian sensitivities in their aggressive pursuit of regional and global dominance threatens peace and stability especially in the Middle East. The insistence to recognize Jerusalem as the eternal capital of Israel and transfer the U.S. Embassy there, while forcing its allies to follow suit despite strong reaction by the United Nations General Assembly and the Organisation of Islamic Cooperation (OIC), unfortunately confirms this point. Taking strong encouragement by unambiguous U.S. support for its illegal occupation policy, the Netanyahu administration in Israel spotted a perfect opportunity to galvanize its power against domestic and international opposition by adapting an aggressive policy line of oppression and intimidation.

While the Arab and Muslim world failed to display a strong reaction due to internal divisions and disagreements, Israel swiftly embarked on a policy of extending its regional influence via symbolic and real gains on the ground.

President Trump’s declaration concerning his intention to withdraw from the Iran nuclear deal was another factor motivating Israel’s increased aggressiveness with the anticipation that tensions will be raised in the region on the Iran-Israeli axis anyway, and it might be wise to take a lead on that front.

As always, under the strong leadership of President Recep Tayyip Erdoğan, Turkey assumed the lead in organizing a strong international response against violent Israeli aggression as the chair of the OIC Summit. On the bilateral front, Turkey called back its ambassadors from Tel Aviv and Washington for consultations and requested the return of the Israeli ambassador in Ankara for a certain period.

To provide robust social support, millions of protesters came together in Istanbul’s Yenikapı Square at a major rally organized in the presence of presidents, prime ministers and ministers who were invited by Turkey for the extraordinary meeting of the OIC Summit. Then in the evening hours, the OIC Summit produced a strong final declaration outlining the common path to be followed in the coming weeks and months. The first mission for the leaders of the Islamic world would be to display unwavering solidarity with the Palestinian cause and oppose unilateral provocations to determine the international status of Al-Quds (Jerusalem). Then concrete diplomatic steps could be taken to incorporate the support of major global powers in order to exert robust diplomatic pressure on Washington, D.C. and Tel Aviv in the U.N. and other international platforms. But one thing is for sure; the time to cry for Al-Quds is over, and it is upon all of humanity to take a stand for justice.

Is the idea of A two-state solution dead?
Previous

US isolation deepens as Trump bungles foreign policies
Next
Loading...
Loading...
We use cookies to ensure that we give you the best experience on our website. If you continue to use this site we will assume that you are happy with it.Ok