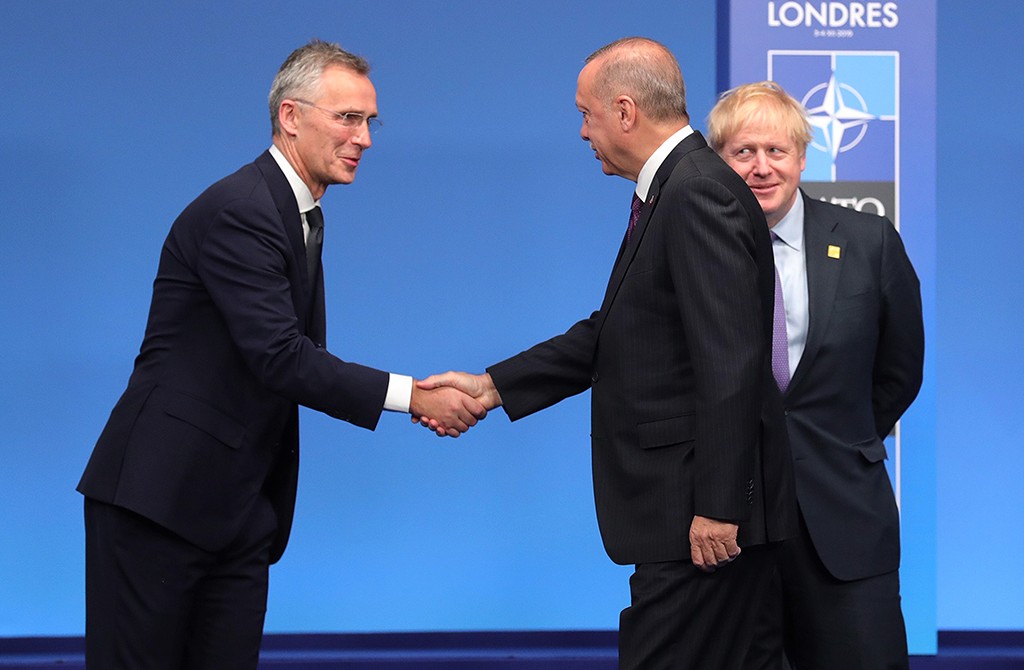 Did Turkey get what it wanted at the London summit?

The NATO leaders' meeting went better than expected. In the alliance's final communique, released after talks concluded on Dec. 4, nations reiterated their commitment to Article 5 of the Washington Treaty, stressed the importance of financial burden-sharing and underlined their intention to seek a common position regarding migration, as well as a united front on cyber and hybrid threats. Noting Russian aggression as posing a possible threat, NATO members called for dialogue with Moscow on intermediate-range missiles. Furthermore, as per Washington's request, the organization hinted it would be turning its attention to the Asia-Pacific region, in a nod to Beijing's expanding influence.

The NATO leaders’ meeting went better than expected. In the alliance’s final communique, released after talks concluded on Dec. 4, nations reiterated their commitment to Article 5 of the Washington Treaty, stressed the importance of financial burden-sharing and underlined their intention to seek a common position regarding migration, as well as a united front on cyber and hybrid threats. Noting Russian aggression as posing a possible threat, NATO members called for dialogue with Moscow on intermediate-range missiles. Furthermore, as per Washington’s request, the organization hinted it would be turning its attention to the Asia-Pacific region, in a nod to Beijing’s expanding influence.

NATO also showed signs of continuing its open-door policy on extending membership by welcoming North Macedonia as the 30th member of the club.

Meanwhile, albeit temporarily, the allies were able to nip tensions emerging from internal divisions and competing visions for the future in the bud. Still, there is no doubt that the organization needs to reassess its current strategy. Addressing questions about the nature of Russian and Chinese threats, not to mention the definition of terrorism vis-à-vis the People’s Protection Units (YPG), the PKK’s Syrian component, is a top priority.

A much-anticipated war of words broke out between U.S. President Donald Trump and his French counterpart Emmanuel Macron. When Trump offered France “some nice ISIS [Daesh] fighters,” Macron urged him to be “serious.” In response, the U.S. president described Macron’s remarks on European foreign fighters as “one of the greatest non-answers.” He also took a jab at the French politician over his recent claims that NATO was “brain dead.” “That is a very, very nasty statement. I would say that nobody needs NATO more than France.” The United States and France also disagree on Turkey’s procurement of the Russian S-400 air defense system and the repatriation of European Daesh militants, with President Trump reiterating that failures over the S-400 deal were down to the previous Barack Obama administration.

The obvious question, however, pertains as to why Macron is digging in his heels and continuing to point fingers at Turkey. There are two reasons behind the French president’s current behavior: first, Macron, facing an uphill battle in his own country’s politics, hopes that he can alleviate domestic pressure by resorting to populism in the field of foreign policy. At the same time, the French politician understands that Europe suffers from a shortage of leadership and is criticizing NATO in an attempt to make his mark on European defense policy. In his own way, Macron seeks to counterbalance Turkey’s growing influence by criticizing Operation Peace Spring and the S-400 deal.

The London summit demonstrated yet again the crucial nature of Turkey’s place in the NATO alliance and gave Ankara a new opportunity to convey its key messages to the group. Turkey highlighted the need to combat the YPG terrorist organization, the need to secure their suggested safe zone in northern Syria and to take coordinated steps to stem the tide of irregular migration. Turkey also agreed not to block the Baltic defense plan on the condition that fellow NATO allies would support Turkish counterterrorism efforts. If the alliance failed to offer sufficient support regarding the YPG issue, Turkey stated, then there would follow additional steps that Ankara could take. Meanwhile, President Recep Tayyip Erdoğan shared documents with his counterparts regarding developments in Operation Peace Spring. When asked when Turkey intended to withdraw from Syria, he asked foreign leaders why they were in Syria in the first place. Here are my takeaways from the NATO summit:

Turkey finds itself in a position in which it is able to sustain its newly formed relationship with Russia without jeopardizing its key role in NATO; however, the S-400 procurement deal clearly remains a source of tension. Another significant development was the decision to hold a four-way summit between the leaders of Turkey, Germany, France and the United Kingdom on an annual basis. This is an important step towards the institutionalization of dialogue. Turkey, which will host the next meeting in February, is laying the groundwork to cooperate with three major European powers in the Syrian theater.

It is possible that dialogue will move the United States and Europe closer to Turkey’s views on political transition, the resettlement of refugees in the safe zone and the provision of group financial support. The four-way summit also enables Turkey to secure Western support for Russia’s aim of supporting a political transition in Syria and for keeping issues over Idlib province at bay. Turkey’s two-track summit diplomacy – the four-way summit and the Astana process – is expected to strengthen the country’s hand in talks over Syria and its recent diplomatic strike with Libya. This is a huge win for Erdoğan’s unique brand of leader-to-leader diplomacy.

The new dynamics of Turkey-West relations
Next
Loading...
Loading...
We use cookies to ensure that we give you the best experience on our website. If you continue to use this site we will assume that you are happy with it.Ok