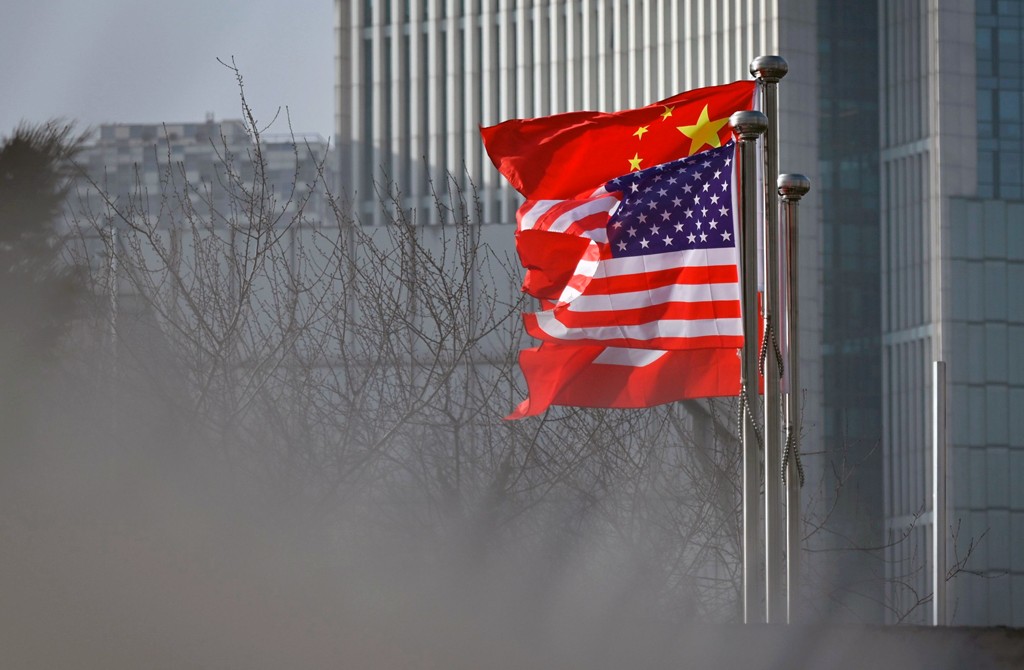 Chinese and U.S. national flags flutter at the entrance of a company office building in Beijing, China, Jan. 19, 2020. (AFP Photo)

The coronavirus pandemic has accelerated some global phenomena such as global rivalry, economic protectionism and (ultra-)nationalism. The liberal world order that was established by the United States and liberal Western European countries is increasingly under heavy pressure since the outbreak of the coronavirus crisis.

The coronavirus pandemic has accelerated some global phenomena such as global rivalry, economic protectionism and (ultra-)nationalism. The liberal world order that was established by the United States and liberal Western European countries is increasingly under heavy pressure since the outbreak of the coronavirus crisis. I want to focus on the possible relations between the declining hegemon (the U.S.) and the rising challenger (China). We do not know, at least for now, to which direction international politics will head toward. However, we can infer some conclusions for the period following the coronavirus pandemic.

First of all, while the hegemon abstains to provide global public goods, the challenger has been willing to do so, especially after the coronavirus crisis. During the crisis, China found opportunities to provide support to some states, including some European states such as Italy and Serbia, which the European Union had refused to help out. However, this is not and will not be easy. On the one hand, the U.S. government declared the motto “America First” that requires turning to domestic politics and in principle remain indifferent to global developments. U.S. President Donald Trump’s administration has been severely criticizing multilateral platforms and international institutions. Trump even questions the utility of alliances and prefers a conflictual discourse in his foreign policy formulation. On the other hand, it is not clear whether China will pay for global public goods, that is economic order, international stability and financial system.

Second, while the hegemon is hesitant to protect international values, norms, rules, procedures and regimes, the challenger is eager to protect the current global system, which mainly serves its interests, and to impose new values, if possible. The U.S. government has halted funding to the World Health Organization (WHO) in the middle of the coronavirus pandemic as it previously cut its share of funding to several other United Nations organizations. The rise of ultra-nationalism, the spread of neo-fascism and populism in the Western world, including in the U.S., and the alienation of multinational institutions undermine the globalization process and create a global power vacuum for leadership.

On the other hand, China has already established several alternative international institutions to challenge the superiority of the Western-centric world system, led by the U.S. There are some efforts in the non-Western world to create an alternative financial international order and new regulations in order to promote cooperation, especially among the non-Western countries. China established the Beijing-based Asian Infrastructure Investment Bank (AIIB) in 2016. In four years, AIIB has 102 approved members worldwide. Many observers consider AIIB as an alternative financial institution to the World Bank, based Washington, D.C. Furthermore, Brazil, Russia, India, China and South Africa (BRICS) formed another financial institution in 2015. The headquarters of the New Development Bank (NDB) is in Shanghai, the largest financial center of China. Trying to be a global institution, the NDP has opened membership to all members of the U.N.

In addition, China has been using the Belt and Road Initiative (BRI) as an effective instrument of foreign aid, similar to the Marshall Plan declared by the U.S. after World War II. Therefore, BRI is not only an economic initiative but also an instrument of Chinese geopolitical strategy and its global foreign policy orientation. China has been trying to reform the liberal economic order and the global governance mechanisms, which have served its interests for the last several decades. By reviving the historical Silk Road, China has been trying to incorporate European countries into its global strategy and also to isolate the U.S.

In spite of the encouraging developments on the side of the hegemon and the challenger, the global power transition will not be easy or cost-free. For sure, the U.S. will not easily accept China reaping the benefit of the current international system. Although the current U.S. government prioritizes national developments over the global ones, the U.S. may reload its position of global leadership anytime. Furthermore, it remains to be seen if China can provide the necessary institutions and values for global leadership.

How to combat post-pandemic debates on political systems
Previous

Improving societal resilience key to post-coronavirus recovery
Next
Loading...
Loading...
We use cookies to ensure that we give you the best experience on our website. If you continue to use this site we will assume that you are happy with it.Ok