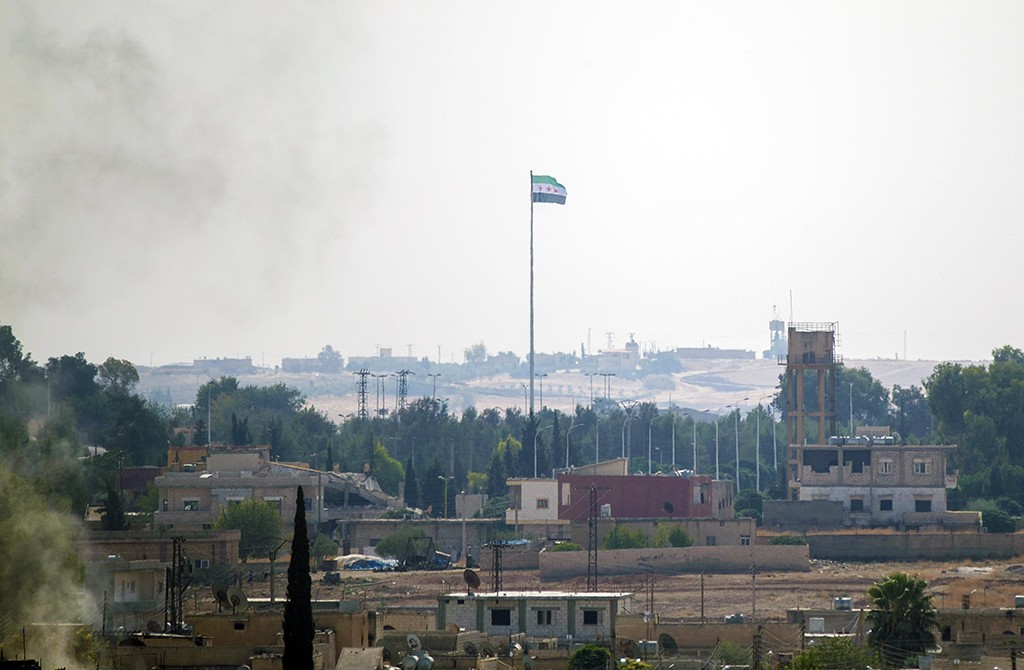 SANLIURFA, TURKEY - OCTOBER 14: A photo taken from Turkey's Sanliurfa shows a flag of Syrian National Army (SNA) is being waved after it hung Tal Abyad town in northern Syria, having cleared it of PKK terror group and the Syrian Kurdish YPG militia, which Turkey regards as a terror group, during Turkey's Operation Peace Spring, on October 14, 2019.

The next few days will be key to Operation Peace Spring’s fate. To be clear, I am not talking about the pace of the Turkish Armed Forces (TSK) and the Syrian National Army (SNA). Western governments, which conveniently ignore the attacks of the People’s Protection Units (YPG) on civilians and journalists near the Turkish-Syrian border, have mobilized to stop Turkey.

The U.S. Congress may discuss economic sanctions, something Sen. Lindsey Graham has been pushing. At the same time, the European Council, led by France, will discuss sanctions on Turkey. Paris hopes to mobilize the counter-Daesh coalition to mount pressure on Ankara.

Former French president Francois Hollande has been calling on NATO to “suspend” Turkey’s membership. Current French President Emmanuel Macron uses the Daesh and “humanitarian tragedy” cards instead. He says the Turkish incursion could facilitate the resurgence of Daesh’s caliphate and therefore poses a great humanitarian risk.

Operation Peace Spring undermined the status quo in northern Syria. The YPG’s elimination will result in the removal of thousands of militants from the area. Turkey’s actions will lead to the safe return of Arabs to their lands rather than the displacement of Kurds.

Indeed, Macron and other European leaders are merely worried that Turkey will undermine the YPG without causing any serious humanitarian risks. They fear that the world will understand that this terrorist group has no popular support whatsoever in Syria. Therefore, European governments will come at Turkey with everything they have.

European politicians hide their cunningness behind allegations of Daesh’s resurgence, looming instability and the displacement of millions. They threaten Turkey with sanctions, but already know that the Turks won’t abort their plan. That ship has sailed.

Turkey won’t retreat from liberated areas due to threats. As such, their main objective is to limit the scope of Operation Peace Spring to Tal Abyad and Ras al-Ayn.

In other words, they are trying to stop Turkey and the Syrian opposition from controlling a 30-kilometer-deep, 480-kilometer-wide safe zone. Moreover, the Europeans are trying to prevent the Turks from requesting additional funds for refugees. They also want to dump their own citizens, who fought amongst Daesh, on Turkey.

The Russian leader, too, used the Daesh card in his initial remarks by saying that Daesh prisoners could break out of prisons before the Turks are in charge. I sense that Moscow seeks to seize opportunities, as NATO allies mount pressure on Turkey. By fueling the fear of Daesh’s resurgence, Russia hopes to alienate the Turkish people from NATO.

The anticipated fallout of the S-400 deal was mitigated thanks to the leadership of President Erdoğan and U.S. President Donald Trump. Now Putin intends to exploit NATO’s harsh reaction to the Turkish counterterrorism campaign against the PKK-YPG. At the same time, he wants to reconcile Damascus with Ankara, whose top priority is the PKK-YPG threat.

Western governments must notice Putin smiling in the background as they test Turkey’s resolve.