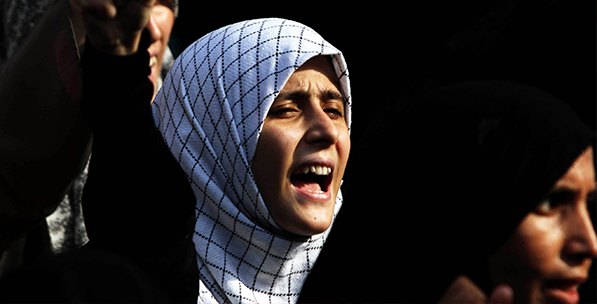 In Jordan and Lebanon, Syrian women often experience intense exploitation, particularly if they represent a vulnerable sector of society  whether a widow, single woman or an undocumented resident.

Displacement, unemployment and shifting gender roles in the Syrian community have fueled an issue that the World Health Organization has as a global epidemic: violence against women. While exact statistics are difficult to come by, it is clear that violence against Syrian women has risen in Jordan and Lebanon, particularly intimate partner violence (IPV), exploitation, survival sex and early marriage. At the core of female refugees’ vulnerability is the lack of income opportunities and security, which leads to financial insecurity and exposes vulnerable Syrians to exploitation. One in four Syrian households in Jordan and Lebanon are headed by women who struggle to pay rent and buy food. There are few opportunities for Syrian refugees to work in Jordan or Lebanon, and the positions that are available often pay low wages, have poor working conditions and expose refugees to harassment. Host nations and the international community must do more to both prevent gender-based violence (GBV) and protect survivors of GBV. This would not only curb violence against women and assist Syrian refugees, but also promote development in local communities.n The economic hardships faced by Syrian refugees have led to a shift in gender roles and an increase in IPV. Syria is considered to have a patriarchal society, where men dominate all elements of society outside of the home and women are seen as homemakers. Now, however, Syrian men in Jordan and Lebanon are unable to fulfil their traditional role as breadwinner and protector of the family. The lack of job opportunities is leading to low self-esteem, severe stress and feelings of disempowerment. This has generated negative expressions of masculinity against women and children, resulting in an increase in IPV.

In Jordan and Lebanon, Syrian women often experience intense exploitation, particularly if they represent a vulnerable sector of society – whether a widow, single woman or an undocumented resident. A local Lebanese anti-harassment group called Say No to Violence estimates that two out of 10 Syrian women are subject to economic, social or sexual exploitation by landlords, employers, community members and aid disturbers. Yet refugees often refrain from reporting such incidents because they mistrust security forces or fear reprisal for their lack of documentation. Research from the International Red Cross and ABAAD-Resource Center for Gender Equality discovered that many refugees in Lebanon engaged in “survival sex” – exchanging sexual acts for food or money – to compensate for their lack of income. Such sexual exploitation, whether consensual or not, demonstrates the desperate financial situation that many refugees find themselves in.

Aid organizations have reported instances of child marriages in Jordan and Lebanon as a means to provide financial support to Syrian families. While this issue does merit concern, it is essential to note that early marriages are quite common in Syria; girls as young as 13 years old can be married if a judge authorizes the union and polygyny is legal. In 2011, 13 percent of girls in Syria were married under the age of 18. However, instances of early marriage appear to be on the rise for young girls in Jordan – from 12 percent in 2011 to 18 percent in 2012 and as high as 25 percent in 2013. Families are seeking husbands for their young daughters to alleviate the financial hardships of refugee life and to secure protection for the girl, altering the practice of early marriage among Syrian refugees and increasing the risks for young girls. First, 48 percent of early marriages in Jordan in 2012 involved a Syrian girl marrying a man 10 or more years older than her. When the age gap between the bride and groom is big, it minimizes the power, autonomy and status that a young woman has. Second, the majority of child marriages are unregistered in Jordan and all are illegal in Lebanon, meaning that the union is not recognized and the girl has no rights. Most of these marriages take place in a local mosque, without legal marr

SETA Brussels is organizing a panel discussion entitled “The Implications of the Idlib Crisis for Turkey and Europe” on Thursday, February 25, 2020 at 12.00-13.30. The panel discussion will focus [...]

SETA Brussels is organizing a panel discussion entitled “The Implications of the Idlib Crisis for Turkey and Europe” on Thursday, February 25, 2020 at 12.00-13.30. The panel discussion will focus on the current humanitarian situation in Syria’s Idlib and its implications for Turkey and Europe. The panelists will discuss the current developments in Idlib and Syria from the geopolitical and humanitarian perspectives.

The event will take place at the SETA Brussels office (3rd floor), Avenue des Arts 27, 1040 Brussels. After the panel a light lunch will be served.

Please confirm your participation by email at brussels@setav.org by 17:00 on February 24, and have a photo ID with you to enter the premises. The number of participants is limited.

Note: The panel will be held in English.