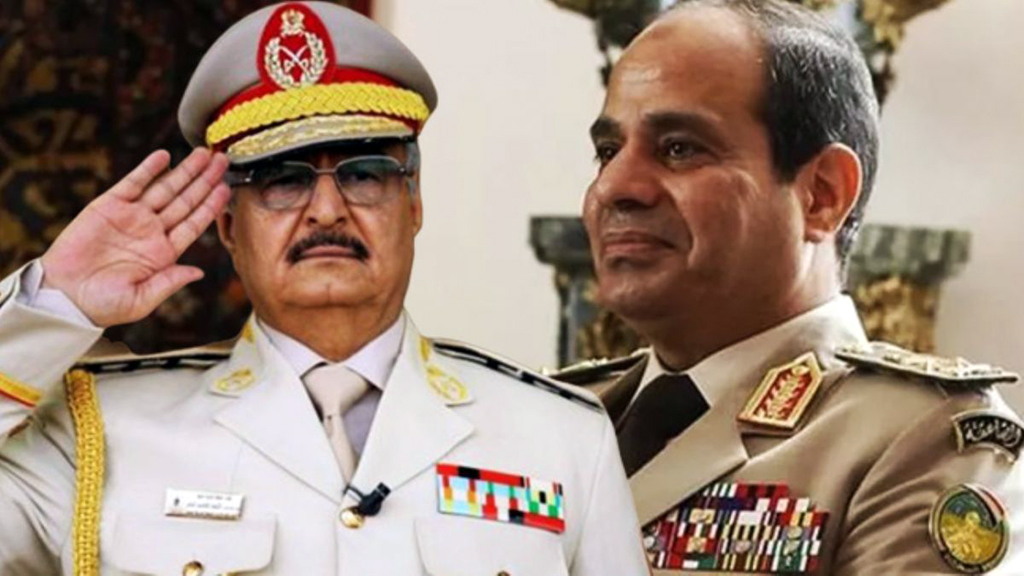 Cairo’s threats and the Sirte-Jufra deadlock

As the Libyan putschist Gen. Khalifa Haftar grows weaker, his sponsors begin to speak louder. Building on angry statements from Greece and France, Egypt raised the ante by taking a fresh step. That country’s usurper president, Abdel-Fattah el-Sissi, declared an attack on Sirte and Jufra a "red line" for Cairo and threatened to "directly intervene" in Libya.

As the Libyan putschist Gen. Khalifa Haftar grows weaker, his sponsors begin to speak louder. Building on angry statements from Greece and France, Egypt raised the ante by taking a fresh step. That country’s usurper president, Abdel-Fattah el-Sissi, declared an attack on Sirte and Jufra a “red line” for Cairo and threatened to “directly intervene” in Libya.

In addition to legitimizing his potential intervention with reference to the self-defense clause of the United Nations charter as well as the House of Representatives in Tobruk and local tribes, he threatened to escalate his proxy war by pledging weapons and training to Libyan tribesmen. Saudi Arabia and the United Arab Emirates (UAE) rushed to el-Sissi’s aid as well. Having failed to get Egypt involved in Yemen’s civil war, those two countries mount pressure on Cairo to get the Egyptians to intervene in Libya.

El-Sissi seems inclined to bow to that pressure and risk a dangerous escalation. Against his country’s own interests, he sides with the Greek Cypriots and Greece regarding maritime boundaries in the Eastern Mediterranean. Having surrendered two Red Sea islands to Saudi Arabia, Cairo now fails to stop Ethiopia from building the Renaissance Dam. Unable to ensure the safety of the Sinai peninsula, el-Sissi threatens to deploy the Egyptian army for an adventure abroad. It seems that the Egyptian ruler has forgotten the lessons of Gamal Abdel Nasser’s humiliation in Yemen.

The majority of commentators believe that Egypt will not dare launch a direct intervention, which would cripple its already troubled economy and fuel domestic instability. Instead, they say el-Sissi searches for a new diplomatic and political activity. In this regard, he seems to think that Libya’s Government of National Accord (GNA), which did not agree to the Cairo Declaration, will bow down to threats.

At the same time, the Egyptian ruler seeks to “deter” Turkey, the GNA’s chief supporter. Yet Tripoli delivered a crystal clear response to el-Sissi’s threat, warning that his “red line” amounted to a declaration of war. Likewise, Ankara is not expected to take el-Sissi’s threats seriously.

Having successfully managed various tensions with the U.S. and Russia in the Syrian theater, it would make no sense for Turkey to walk back on its engagement in Libya over el-Sissi’s threats, which are unlikely to gain support even among Egyptians.

Egypt’s potential intervention would only serve to fuel competition over its western neighbor. If Cairo takes action, Algeria would be likely to abandon its policy of neutrality and actively support the Libyan government. Likewise, Turkey, which has been invited to Libya by that country’s legitimate authorities, would have to increase its military footprint there. It would be unreasonable to think that Cairo fails to see what even the Russians acknowledge today.

Turkey outplayed all other stakeholders by concluding two agreements with Libya’s legitimate government in November 2019. By breaking the siege of Tripoli, the GNA demonstrated that the sheer number of Haftar’s supporters had little impact on the ground. The most recent visit of senior Turkish officials to Tripoli also showed that improving bilateral relations with Libya is a top foreign policy priority for Turkey.

So what does el-Sissi want? Some observers believe that the Egyptian ruler seeks a partition of Libya into western and eastern parts. Others say he is concerned about Moscow signing off on the GNA’s liberation of Sirte. Yet others argue that el-Sissi strengthens Russia’s hand in negotiations with Turkey and intends to discourage Washington from cooperating with Ankara.

One way or another, the situation in Sirte and Jufra, which control the oil crescent, will determine the balance of power in Libya. Although the GNA controls the el-Sharara oil field, which accounts for 30% of Libyan oil, the remaining reserves are all in eastern Libya.

To prevent the partition of Libya into eastern, western and southern parts, Haftar must be excluded from negotiations and the country’s legitimate government must control all of the oil. The GNA’s request for a return to the April 2019 borders is a legitimate demand. The solution, however, must rest on the 2015 political agreement. The liberation of Sirte and Jufra would prevent the easterners from attacking the government forces at will and facilitate a lasting cease-fire and political transition.

Perspective: Coronavirus Impact on the Phase One Deal | Where Does it take the U.S.-China Energy Relations?
Next
Loading...
Loading...
We use cookies to ensure that we give you the best experience on our website. If you continue to use this site we will assume that you are happy with it.Ok