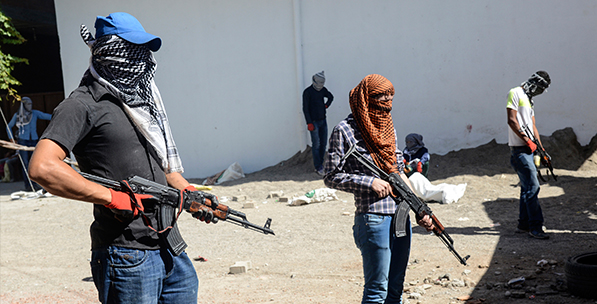 Butterfly Effect: The PKK’s Actions not only Jeopardize Turks but US Citizens

It is in the hands of U.S. officials to avoid attacks targeting U.S. missions and citizens. The U.S. should be aware that the support being given to the PYD is also given to the DHKP-C.

What if U.S. officials knew that the weapons they are delivering to groups fighting the Islamic State of Iraq and al-Sham (ISIS) were being used against their own interests? What if they knew their own weapons were being used by the Revolutionary People’s Liberation Party-Front (DHKP-C), which has declared that the U.S. is one of its primary targets? Does the U.S. support its own enemy? Does this seem illogical? On the contrary, it has a simple correlation.

The West, especially the U.S., tends not to consider the Kurdish Democratic Union Party (PYD), a Syrian affiliate of the PKK, a terrorist organization but defines it as “the sole actor suppressing ISIS.” U.S. Secretary of State John Kerry described the airdrops of weapons and ammunition to “valiant” Kurds fighting ISIS in the Syrian border town of Kobane as a moral effort to respond to an emergency situation; thus, to not support them would be an irresponsible act.

The U.S. Congress had also approved the program aiming to train and arm moderate Syrian rebels to fight ISIS. However, the actors fighting ISIS, such as the PYD, benefit from these arms. Up to this point, it seems no harm to U.S. interests has been instigated, as the U.S. supports the PYD and trains the PYD’s military wing, the YPG. The tricky point in this is that the increasing collaboration of the PYD with leftist terrorist organizations, such as the DHKP-C and the Marxist-Leninist Communist Party (MLKP). The former is designated as a foreign terrorist organization by the U.S.

The MLKP, aiming to construct a communist order in Turkey, began working with the PKK in Syria in 2006. The MLKP, having decreed to cooperate with other leftist organizations to pursue communist revolutionary activities in Syria during its fifth congress in July 2014, strengthened its leading role in Syria among other leftist organizations and cooperation with the YPG, that is to say, the PKK. As a result of this cooperation, MLKP members have been trained in Iraq and have begun fighting with the YPG against ISIS in Syria. Moreover, the MLKP announced the formation of a new unit called the “International Freedom Battalion” on June 10, 2015, to unite Marxist organizations throughout the world to fight in Syria.

Moreover, other communist and so-called revolutionary leftist groups came together in December 2014 under the moniker of the “United Freedom Forces” (BOG) in Rojava also acts in cooperation with the YPG. Therefore, communist organizations benefit from arms given to the YPG. Today, these arms seem to be used against ISIS, but they are also directed at targets that hinder their communist aims whether it is Turkey, the U.S. or any other Western country.

The DHKP-C has conducted a number of assassinations and suicide bombings in Turkey. It embodied its anger against the U.S. on Feb. 1, 2013, with an attack by a suicide bomber against the U.S. Embassy in Ankara, killing a security guard and wounding three others. Recently, two suspected members of the DHKP-C opened fire on the U.S. Consulate in Istanbul on Aug. 10, 2015.

It is not difficult to understand that cooperation between the PKK and the DHKP-C is built upon Marxist-Leninist ideology, as the PKK also depends on the same ideology. In fact, the so-called “secret” alliance between them was documented in Serxwebun, the PKK-affiliated journal in 1996: “We, as [the] DHKP-C and [the] PKK declare with this protocol that we have initiated the first steps to answer our people’s hopes and needs.”

Interim Prime Minister Ahmet Davutoğlu said on July 26, 2015, that “we are aware of the cooperation of the PKK and the DHKP-C, and we also know what the DHKP-C is doing in Qandil.” This can be considered official confirmation of the link between the two terrorist organizations. It is noteworthy to indicate that in the beginning of the 1990s when the PKK enhanced its attacks, the DHKP-C lessened its own, whereas in 1999-2004 when the PKK declared a cease-fire, the DHKP-C increased its attacks. Moreover, the synchronicity of the DHKP-C attack on a police station and the U.S. consulate in Istanbul on the same day as an attack by the PKK in Silopi, which killed two police officers, generated comments declaring the DHKP-C a “spare wheel” of the PKK and the relationship between them as a “see-saw.”

It is in the hands of U.S. officials to avoid attacks targeting U.S. missions and citizens. The U.S. should be aware that the support being given to the PYD is also given to the DHKP-C. The question to answer is whether U.S. officials know that they are also supporting the DHKP-C while fighting ISIS or if the support given to fight against ISIS overpowers the security of its own citizens. It is U.S. citizens who deserve to hear the answer to this question.

From Missiles of October' to Missiles of Syria
Previous
Neighboring a Civil War: Turkey's Border Security With Syria
Next
Loading...
Loading...
We use cookies to ensure that we give you the best experience on our website. If you continue to use this site we will assume that you are happy with it.Ok