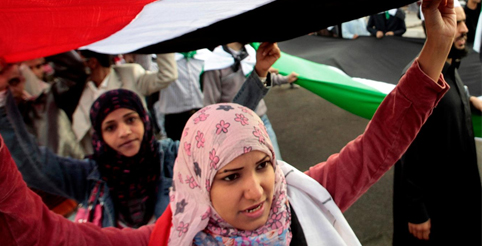 Conspiracy theories are instruments of creative thinking. Yet, there is a huge difference between creative thinking and insisting on selective facts that only align with a theory. Similarly, Arab uprisings are at the center of dozens of conspiracy analyses. Currently fashionable theory claims that the Arab uprisings are the work of the United States and the West. The great powers are reshaping the Middle East and North Africa. If you have a good, or maybe perfect, understanding of all of the dynamics of what has happened, a posteriori analysis is a difficult but applicable method. This analysis concludes that most or all of the results of the uprisings have aligned with American and Western interests. However, the theory ignores the fact that the unexpected revolutions ruined global expectations regarding our region in both the near and long term. Proponents of this view also ignore the fact that Western countries are enduring an economic crisis, which has been exacerbated by this unexpected mobilization. We witnessed the last planned Western interventions and their results. Neocons – who occupied Iraq and Afghanistan based on a conspiracy theory before the eyes of the world that even astounded conspirators – were devastated and lost their power to Democrats in the U.S. The second conspiracy theory is that global and regional powers knew or foresaw the uprisings.This means that the dictatorships, the dynasties, Israel, the U.S., Saudi leadership, Hosni Mubarak, Moammar Gadhafi, Bashar al-Assad, and Zine El Abidine Ben Ali administrations that suffered the most from the uprisings have hundreds of thousands of people working in intelligence agencies.

In other words, considering they were poorly prepared for the uprisings kills the possibility of following: perhaps they failed to foresee what happened! Either these actors that suffered seriously from the uprisings don’t have any intelligence services, or their intelligence services lost their meaning as each of these events was only an organic civil rebellion. The two conspiracy theories discussed here shape perceptions of the Arab uprisings.These two headings also shape analyses and possible roles for Turkey. If conspiracy theories are mere pastimes or creative contributions to push deeper analyses, this causes no problem. However, if these theories become central to the analysis, then they support the perception that change is impossible. Particularly in our region, it is impossible that a demand for change or local political decisions be realized on its own. People who courageously supported the uprisings at the expense of their lives are the best answer to this domestic Orientalism.

Syria: A litmus Test for the Region
Previous