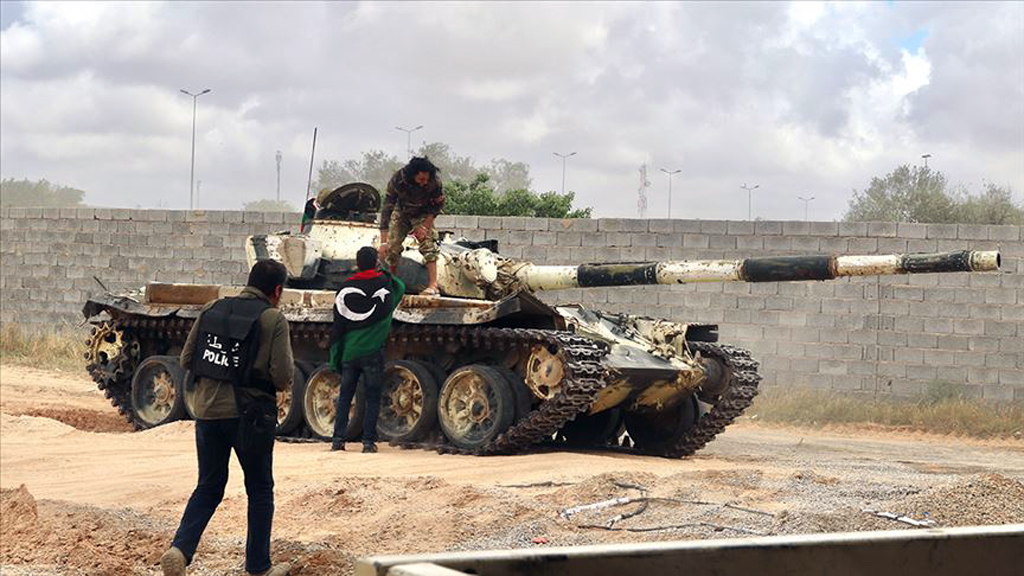 Despite the dominance of the coronavirus pandemic, the Libyan crisis is high on the agenda of international politics. The world has been watching the success of the Turkish-backed legitimate government against putschist Gen. Khalifa Haftar.

Despite the dominance of the coronavirus pandemic, the Libyan crisis is high on the agenda of international politics. The world has been watching the success of the Turkish-backed legitimate government against putschist Gen. Khalifa Haftar. The Libyan government liberated the strategically important al-Watiya air base from Haftar’s militias and mercenaries. The government’s forces also destroyed several Russian-made Pantsir air defense systems in the last two weeks. Considering the change in the balance of power on the ground, I want to discuss the U.S. policy toward the Libyan crisis.

The stance of the U.S. government is decisive for the future of the Libyan crisis. At the beginning of the crisis, the U.S. government was supporting Haftar alongside all other global and regional states. Then, the U.S. began to back down from supporting Haftar. The reluctance or the selective engagement policy of the U.S. led to the Russian intervention into the Libyan crisis and their dominating position in the Middle East. Since the reluctance or non-intervention of the U.S. creates a power vacuum in the international system, as soon as other global or regional actors see this vacuum, they try to fill it. Most recently, Russia has crammed itself into the Middle East and Eastern Mediterranean, while China pervades the coronavirus pandemic on a global scale.

Gen. Haftar used to be an American proxy, rather than a Russian one. He was a well-known general of Moammar Gadhafi and was captured as a prisoner of war during his fight in Chad in the late 1980s. Haftar then escaped to the U.S. where he spent almost two decades, reached a deal with American intelligence and eventually obtained American citizenship. Nowadays, however, he is fully supported by Russia and thus began to be alienated by the U.S.

The U.S. government last weekend called on Haftar to stop its attacks against Tripoli, the Libyan capital, under the legitimate government of Prime Minister Fayez al-Sarraj, and begin negotiations. U.S. Ambassador Richard B. Norland welcomed the Libyan government’s important contributions to defeating terrorism and achieving peace.

In spite of some explanations made by American officials, it seems that the U.S. government still does not have a clear Libyan policy because it still believes in achieving peace and stability through peaceful negotiations between Libyan leaders, including Haftar. It is obvious to everybody that Haftar will not sit and discuss peace in Libya but will expect other political groups to step aside and allow him to rule the country. As he is still backed by a large group of states, Haftar thinks that he will able to control the country with international support and foreign mercenaries. The U.S. will not even mobilize its political and diplomatic leverage against major supporters of Haftar, namely the United Arab Emirates, Saudi Arabia and Egypt.

The U.S. calls for the end of the “destabilizing flow of Russian and other foreign military equipment and mercenaries into Libya,” but on the other hand, it does not pursue an effective deterrent policy toward the states supporting Haftar. It could at least punish pro-Haftar Middle Eastern states, i.e. the UAE, Saudi Arabia and Egypt. Additionally, the U.S. has not provided any meaningful military assistance to the legitimate Government of National Accord (GNA) in Libya. It does not give any effective political or military support to Turkey or other pro-GNA countries.

There were two telephone conversations between American and Turkish officials. The two calls – the first between President Recep Tayyip Erdoğan and President Donald Trump, and the second between Turkish Presidential Spokesperson İbrahim Kalın and U.S. national security adviser Robert C. O’Brien – about the future of the Libyan crisis are important in improving cooperation between Turkey and the U.S. The two sides have agreed on certain principles. First, both countries are in accord in their support for the legitimate GNA based in Tripoli. Second, both countries call the attacks against the GNA illegitimate. Third, they call on states that support Haftar to stop the flow of weapons to him. These agreed-upon principles will make some contributions to the management of the crisis.

There are several factors, however, that will influence any U.S. policy change in the Libyan crisis. First of all, as long as the U.S. does not change its current perception of Ankara and stop otherizing Turkey, the impact of the U.S. will be limited, not only in Libya but also in other regional crises. Second, considering the emerging political, economic and social developments harming any multilateral initiative in Europe, the persistent disagreement between the U.S. and Turkey will continue to hamper the influence of NATO in the region. Haftar has signed exclusive agreements allowing Russians to establish military bases in Libya, which will enable Moscow to encircle Europe from the south. In other words, if the U.S. continues to consider any development or policy detrimental to Turkey a priority, it will continue to open up more space for Russia, not only in the Middle East but also in the Eastern Mediterranean. Third, it may be costly for the U.S. to support actors – Haftar’s militias and mercenaries – that are being accused of war crimes by international nongovernmental organizations such as Amnesty International and Human Rights Watch.

The China issue and upcoming US presidential elections
Next
Loading...
Loading...
We use cookies to ensure that we give you the best experience on our website. If you continue to use this site we will assume that you are happy with it.Ok